Showing posts from August, 2013
Show all

of best laid plans and all that - my first solo Trip, Part 1 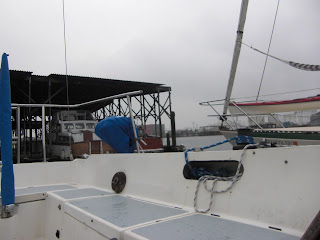 I had it all planned out.  I had researched it.  I had plotted my course on my IPad using the Garmin Bluechart tool and on my Garmin GPS 521s unit.  It was gonna be a 4 day trip to places up north... Blake Island and Kingston to be exact.  I had provisioned (with more food than I could eat incidentally) and got a 5 gallon jug for water (as I have challenges with the water supply on the boat at the moment) and got all my Stuff together.  I was going to leave at 9 AM and get a dock space at Blake Island Marina, because I was going in the middle of the week there would be no problem. Taken from below... it was raining....    I forgot that I live in Washington, where the weather is unpredictable, at best.  We have had WEEKS of really great weather, so weather was the last thing on my mind.  But I arrived at the marina around 8 am to RAIN and FOG.... WHAAAAAAAT?  I guess my order for good weather got lost or something.  Hoping for the best I loaded the boat with all my stuff and put i
Post a Comment
Read more 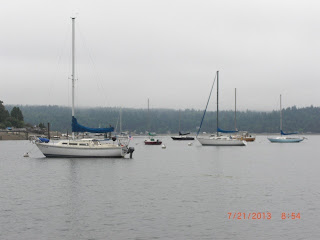 So up to this point, I have done a lot of Day sailing.  This is fun, don't get me wrong, but I wanted to go exploring. it is one of the primary reasons that I bought the boat after all.  But where to go?  so many choices, and so many things i don't know.  Then a perfect situation appeared.  It turns out that the Foss Harbor Club (have I mentioned how much I like Foss Harbor ?) was doing a weekend trip to Dockton, which is part of the King County Park system.  If you don't know where Dockton is, it is in Quartermaster harbor, which runs between Vashon and Maury islands.  Well, Technically they are not two individual Islands as they are connected by a small spit of land that has a road on it.  Whether this is natural or man-made I don't know.  It is on the north west corner of Maury Island. A view of Dockton's many moored boats     I had been out there once before with my Brother in law, and we had lunch while we moored to what I thought at the tie was a publ
Post a Comment
Read more
More posts