Gettin' Heady with it!

I had a few goals to accomplish in the Head... or bathroom... replace the ugly counter top, Put in a new Faucet/shower, hide the ugly holding tank pump out and vent hoses, and brighten the head up a bit.  In the process I wanted to move the sink slightly, as I always felt it looked awkward where it was. 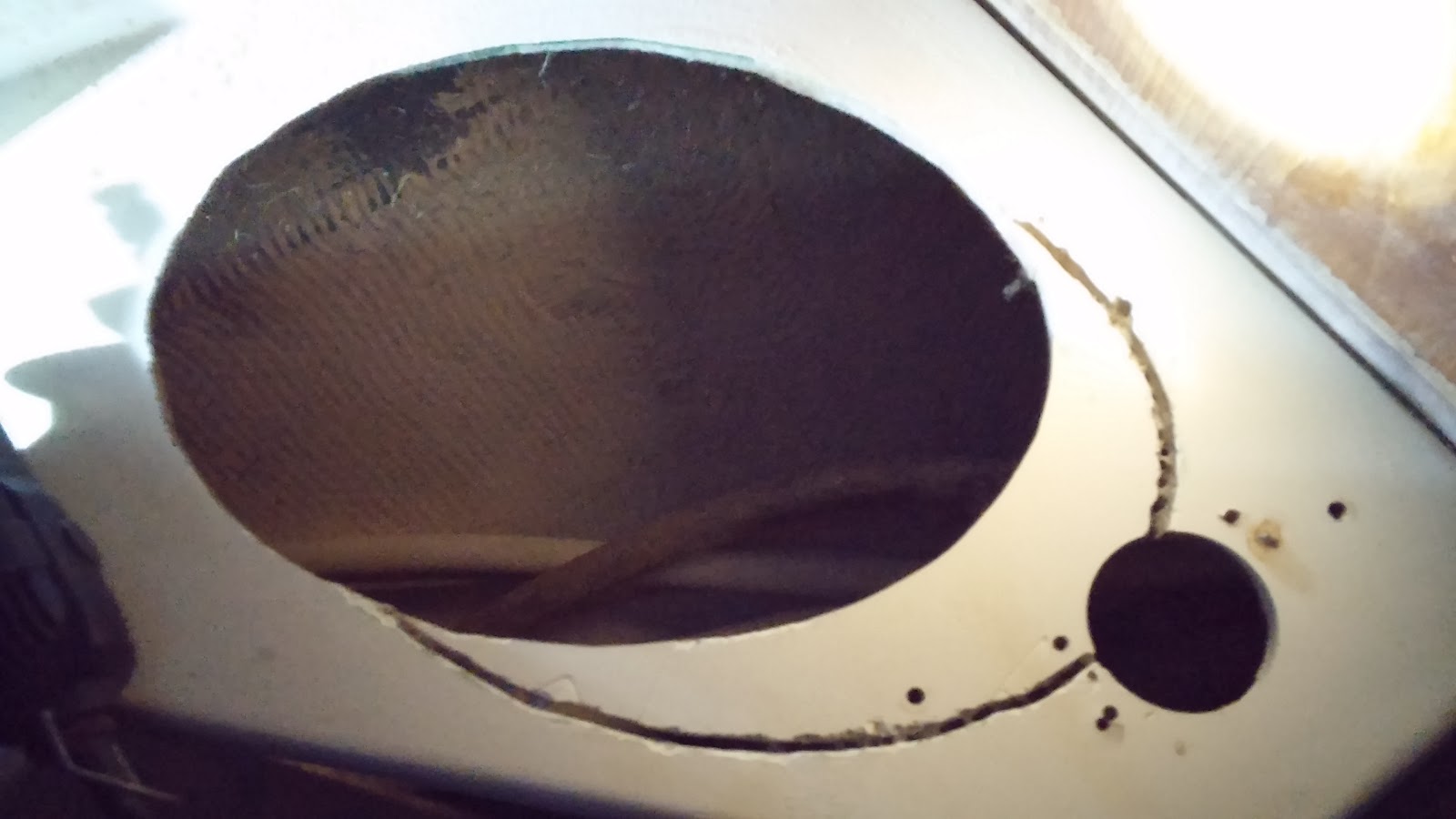 After removing the counter top, The first step was cutting out a new one, by tracing the old one, and using my Jigsaw.  Then I had to figure out where I wanted the sink to be, by placing a Template I had cut out of paper, an moving it around until I was happy with where it was.  Next, cut the hole out, and take the counter to the boat for a dry fit, and to trace the new Sink location.

﻿
Now it was time put the Formica on!  If you have never worked with this stuff, let me tell you, it is challenging.  It is fairly flexible, but will snap, after a certain point.  Handling a full sheet of this by yourself without causing it to break is next to impossible.

﻿
I found a piece that was big enough... by big enough I mean that it needs to be at least a half an inch longer all the way around.... 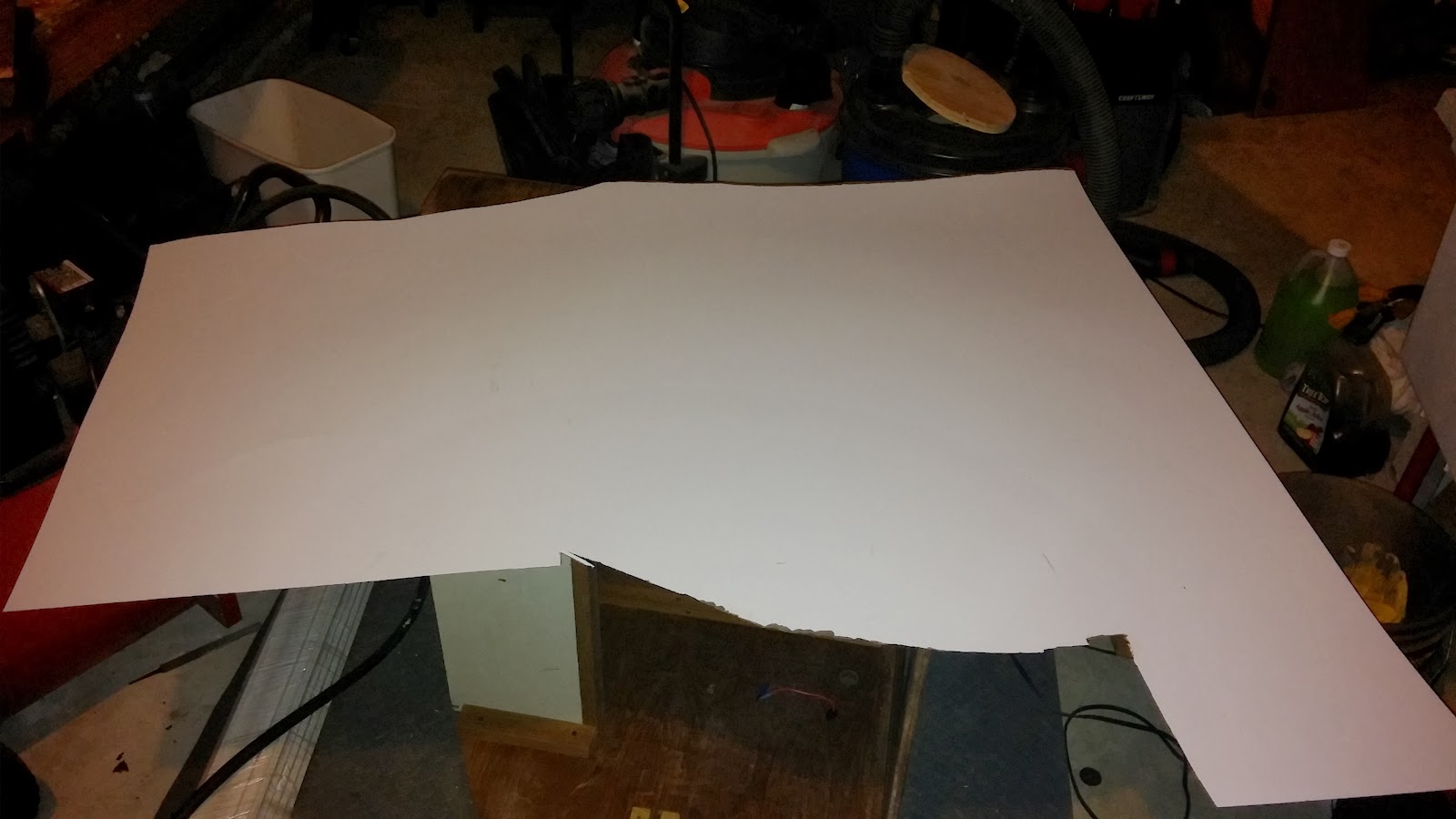 Then I placed the counter top, RIGHT SIDE UP, on top of the formica and traced around it, extending each side by about half an inch. 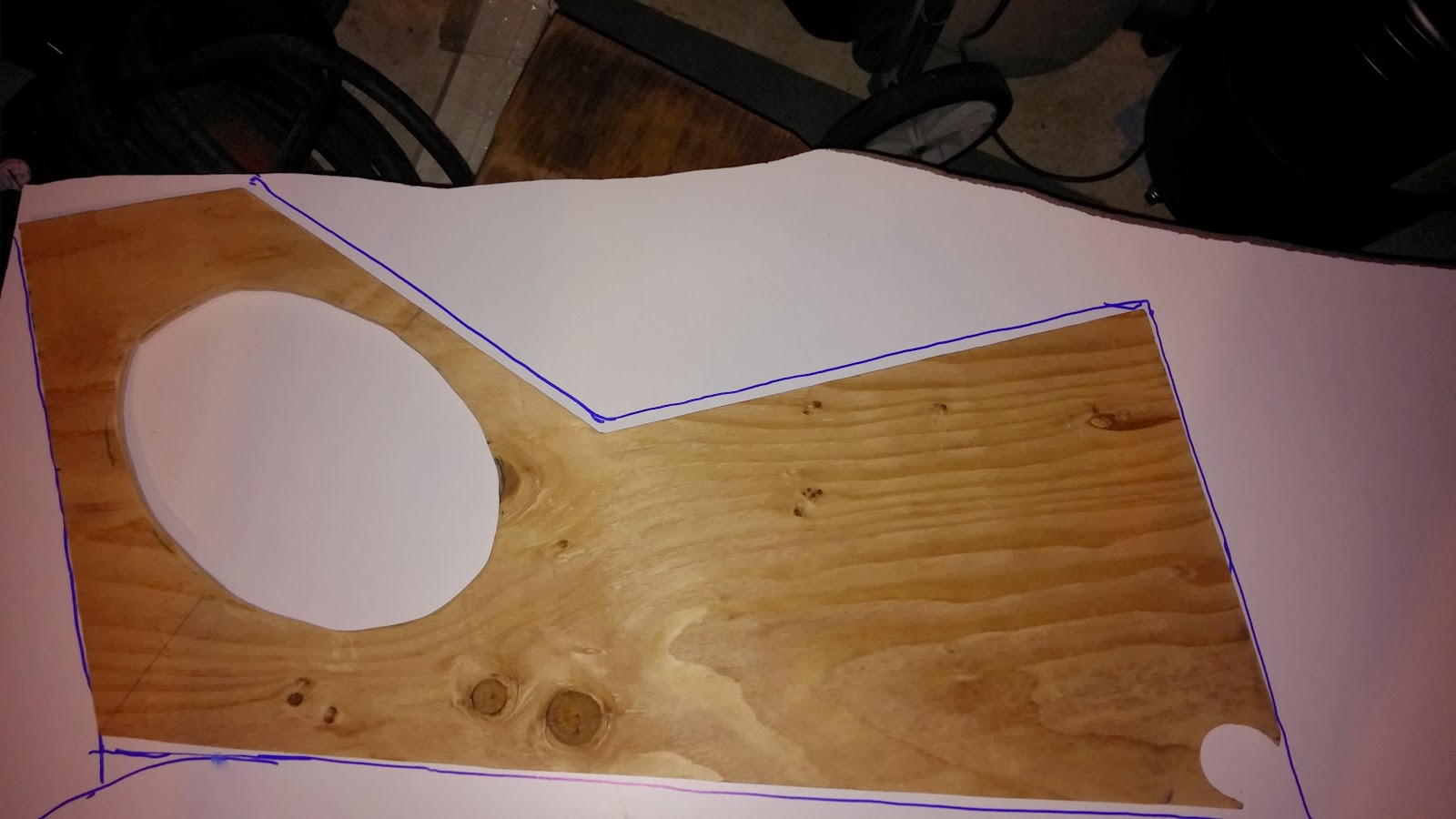 Now it is time to cut it out.  for this, I used a specialized tool called Laminate Shears.  If you have ever used sheet metal shears, or tin snips, this will be familiar to you.  It is an odd looking tool that has two cutting surfaces.

Using these is like using 2 pairs of scissors placed an eighth of an inch apart at the same time...

You have to be VERY careful when using these.... they ONLY cut straight lines, well, relatively straight, and are hard to keep on course.  Allow yourself plenty of excess.  Also, be careful to support the waste side, as it can snap... right into your usable piece! (don't ask me how I know this...)﻿﻿﻿

Now for a dry fit.  place the Formica upside down, and place the counter top on it upside down... make sure you have room to work on all of the sides.  Notice in the picture below, I wrote the word "Bottom" in big bold letters... When I put Formica on the galley.... I initially put it on the wrong side... so I learned from my mistake...
Now the time had come to adhere the Formica to the countertop.  First, gotta assemble the tools...
The next step is to put the contact Cement both on the plywood and the bottom of the Formica... 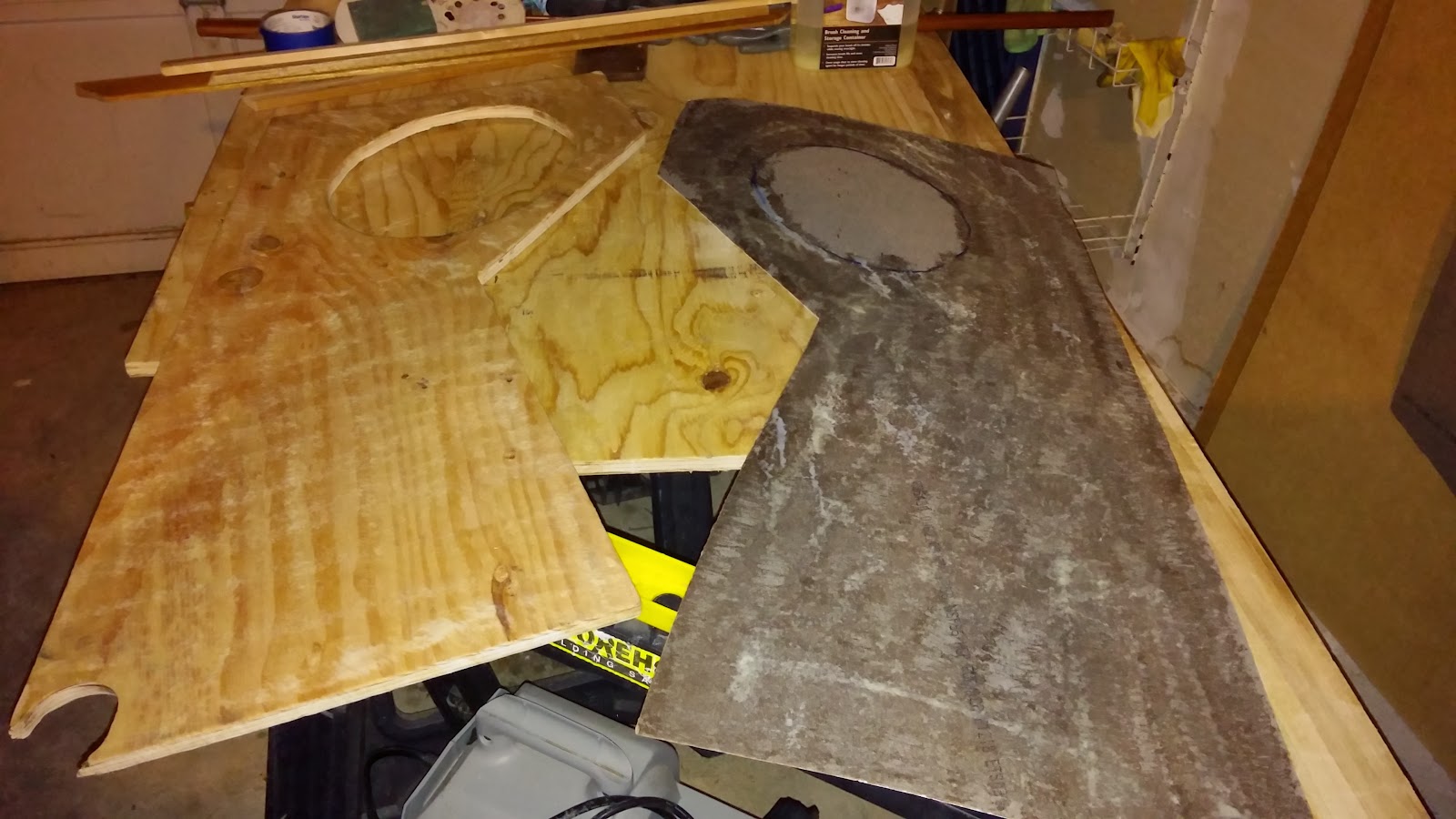 After you can touch the Cement without it coming off on your finger, you put down the scrap wood spacers... DO NOT wait TOO long, or the cement won't work.  The reason for the spacers is that once both contact cement coated surfaces touch, you are DONE and it is next to impossible to separate them.  so you use the spacers so you can position the Formica properly so there is overlap on all sides.
﻿

Now I am ready to go.  I pulled out 1 spacer (the one on the right) and use the roller to work out any air bubble that are underneath, working from the center toward the sides.  then I pull out the next spacer, and do the same for the next section, and so on.


﻿﻿
To do the trimming, I use a router with a Flush Cutting bit.  In the picture below you see the router (upside down) and the bit.  on Top, there is a screw that holds the Bearing, which is the shiny part below the screw, and then the cutting bit which is yellow.  The way this works is, the bearing rides against the plywood edge, and since the bearing and the bit are the same diameter, the bit will cut the Formica flush with the plywood.
﻿﻿ 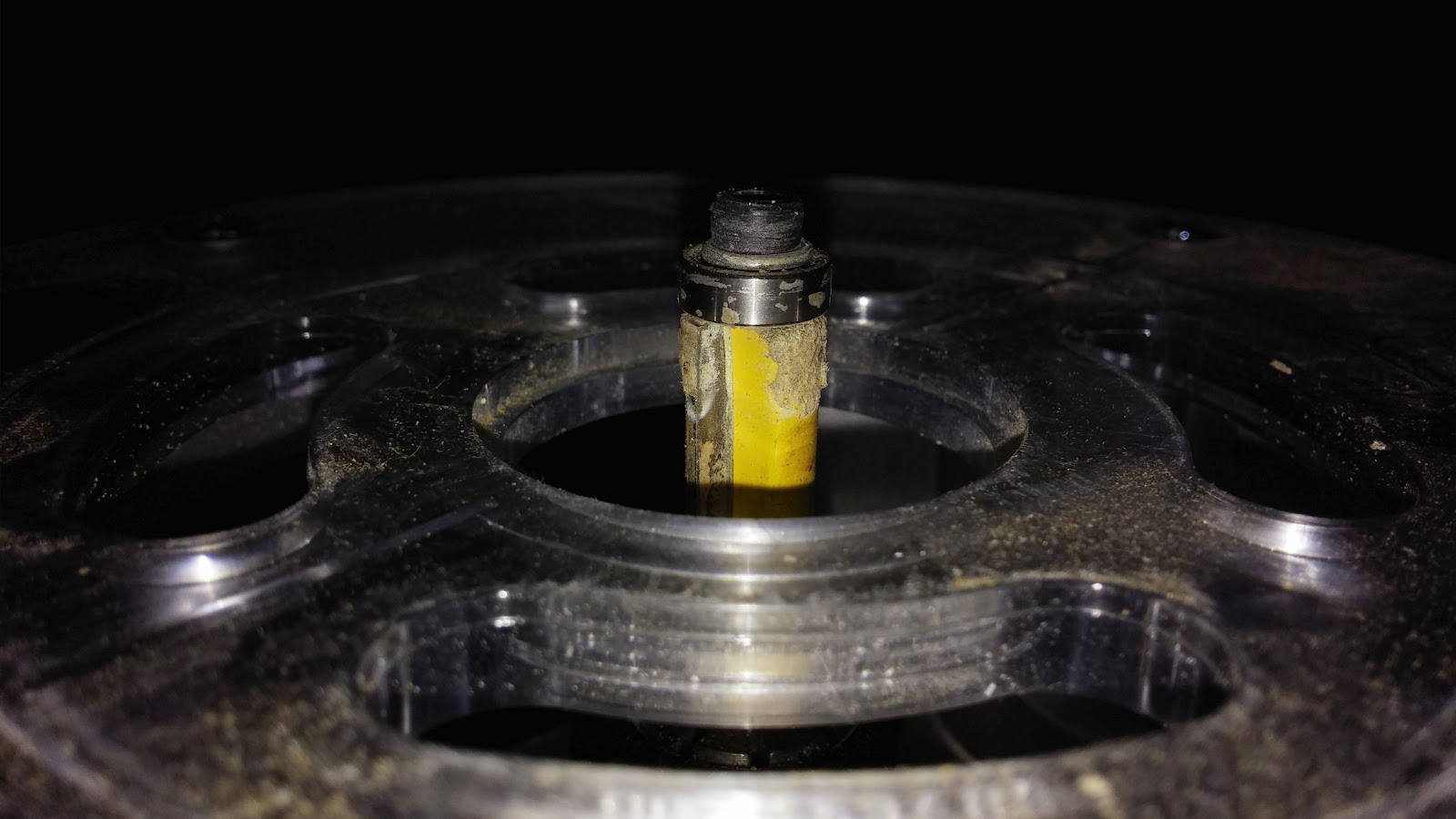 Then it is just a matter of going around the edge to trim the Formica.  There are smaller routers, Aptly named, Finishing Routers, that do this job a little easier... 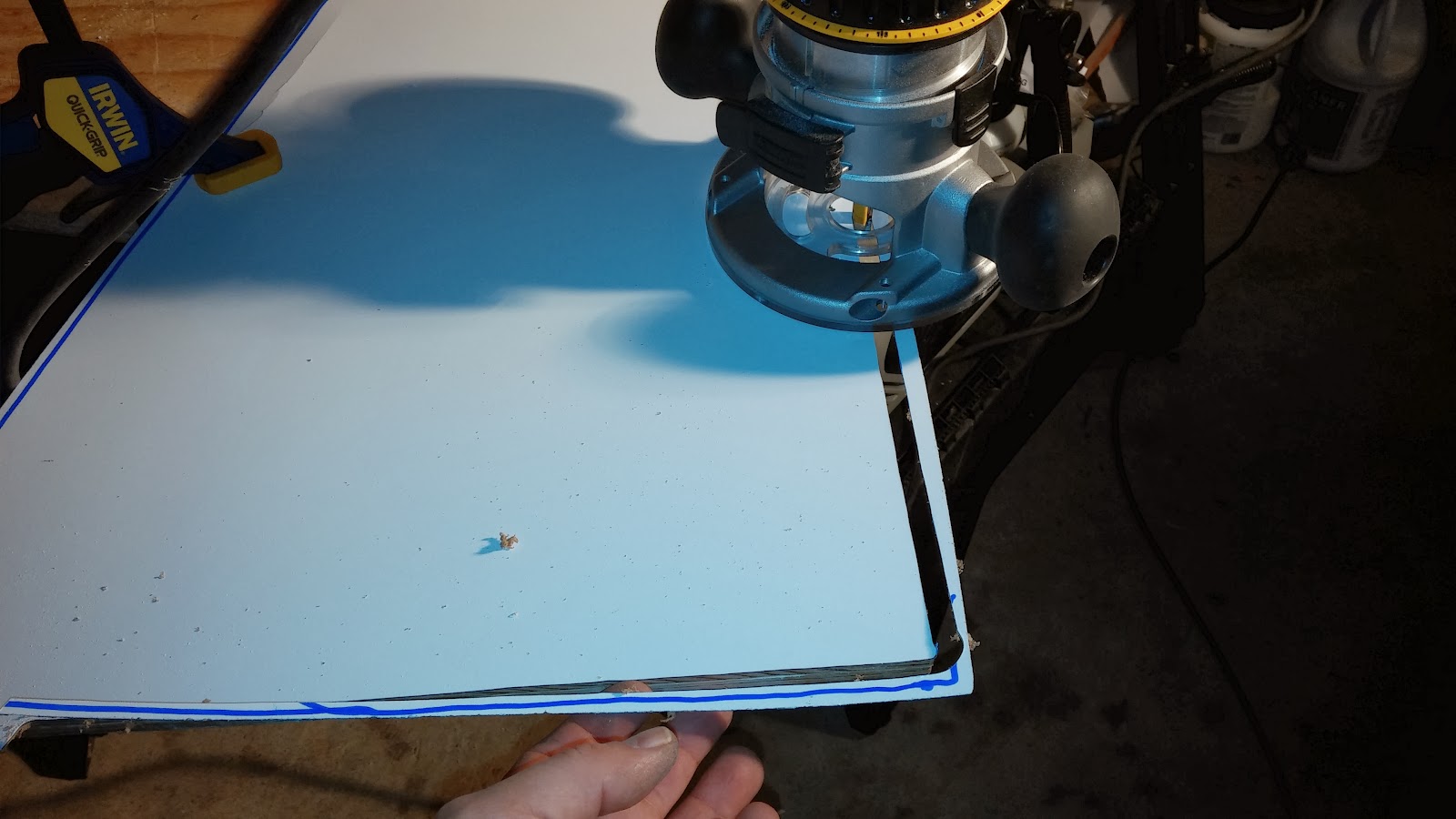 Now I just needed to cut out the hole for the Sink.  To do this, I need a starting hole.  So I used a Forstner Bit... 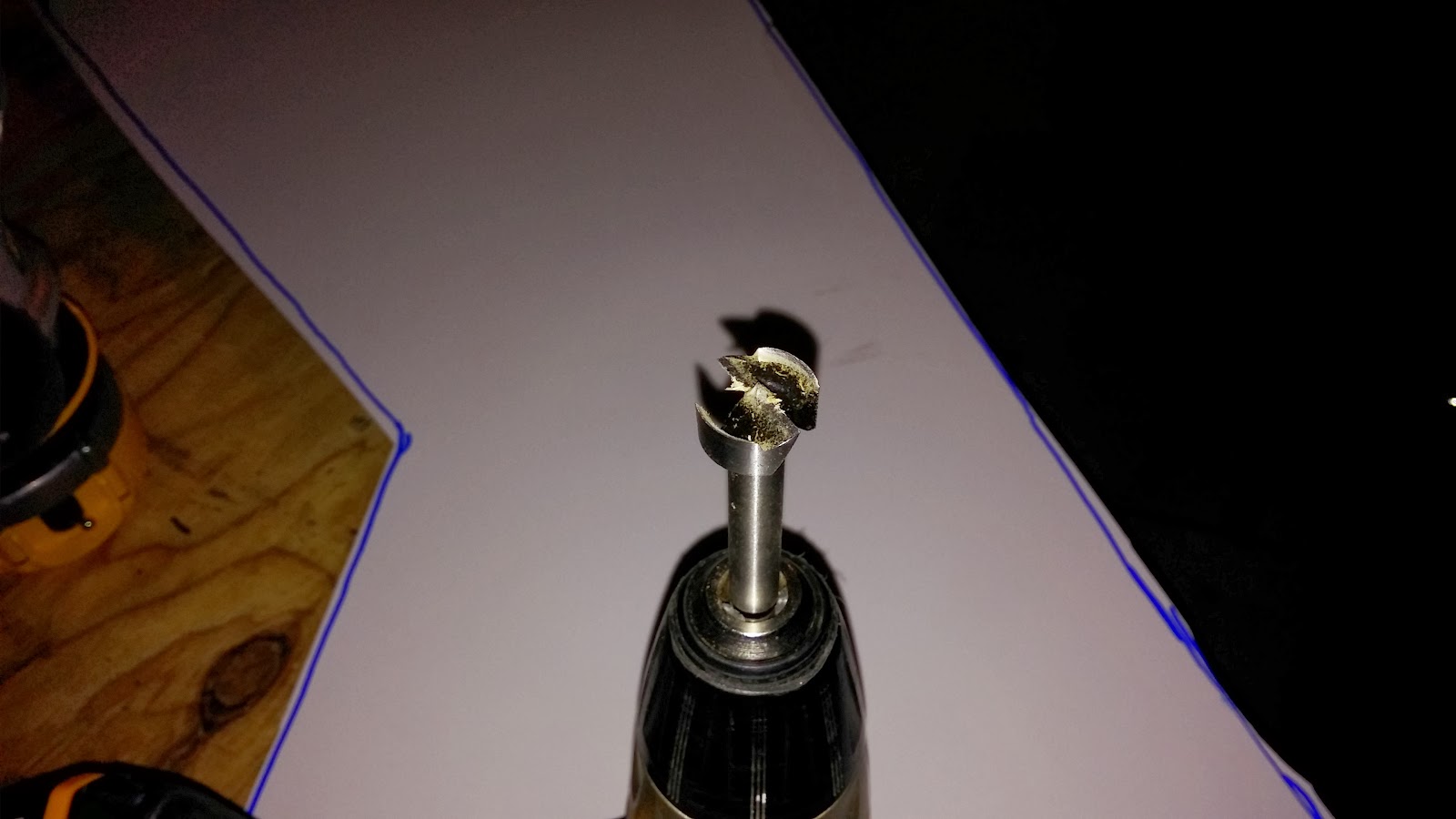 Then it was a matter of putting the router in the hole, and going around the inside of the hole. Now I needed a Faucet, after all, what is a sink with out a faucet?  Useless!   I wanted to have a Single hole
faucet, as I had very little room to install it.  I decided to use this one from Scandvik.  It was a little expensive, but I think it will be worth it in the long run, and will look and work a LOT better than that kitchen sink sprayer that was in there before!

First you have to Position it, and it helps to have a Brother in law to point out that unless you had it off center a bit, you wouldn't be able to operate the cold water tap.... Thanks Bro! 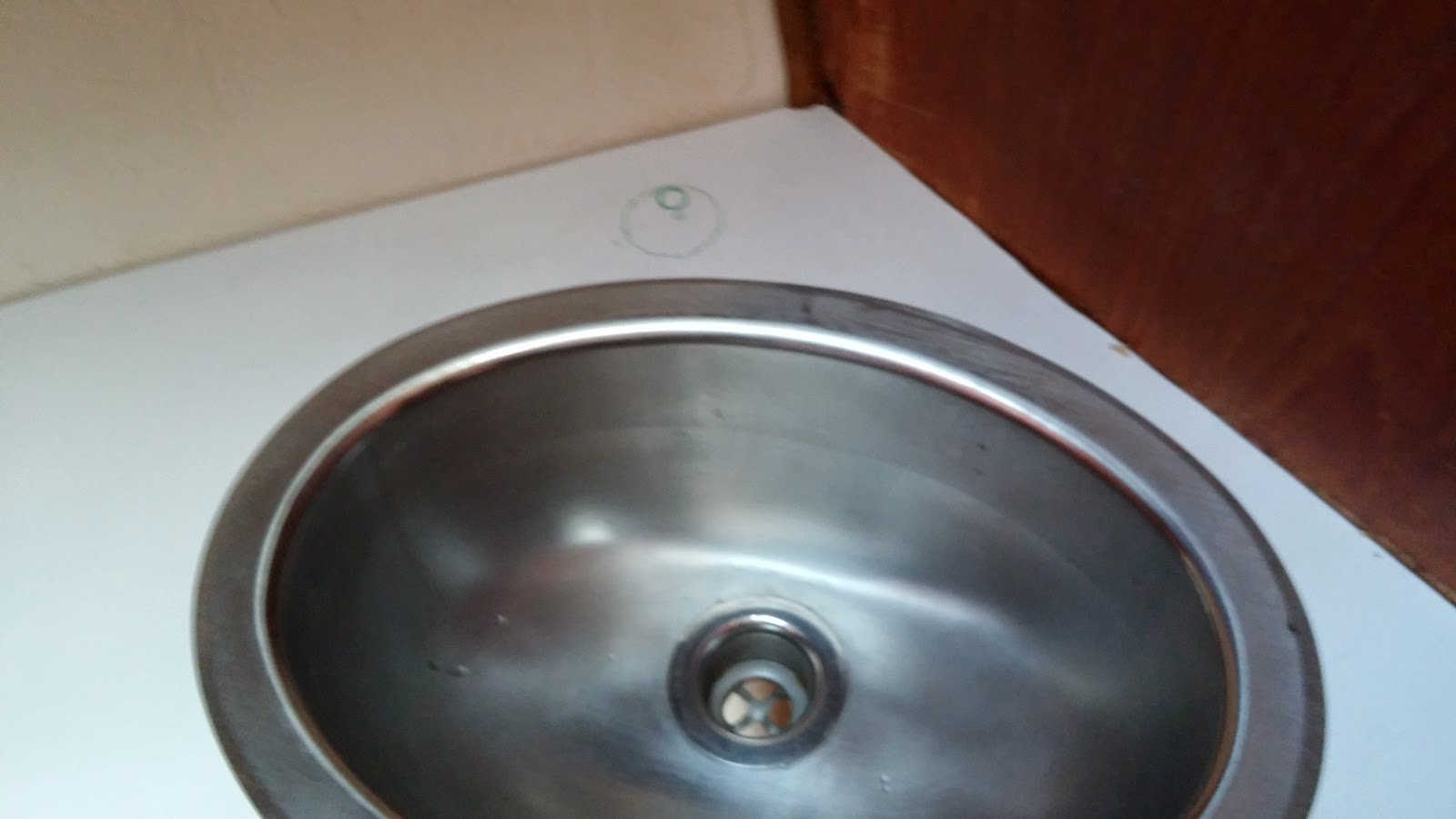 
﻿﻿
Then install the Faucet using the manufacturer's Directions... 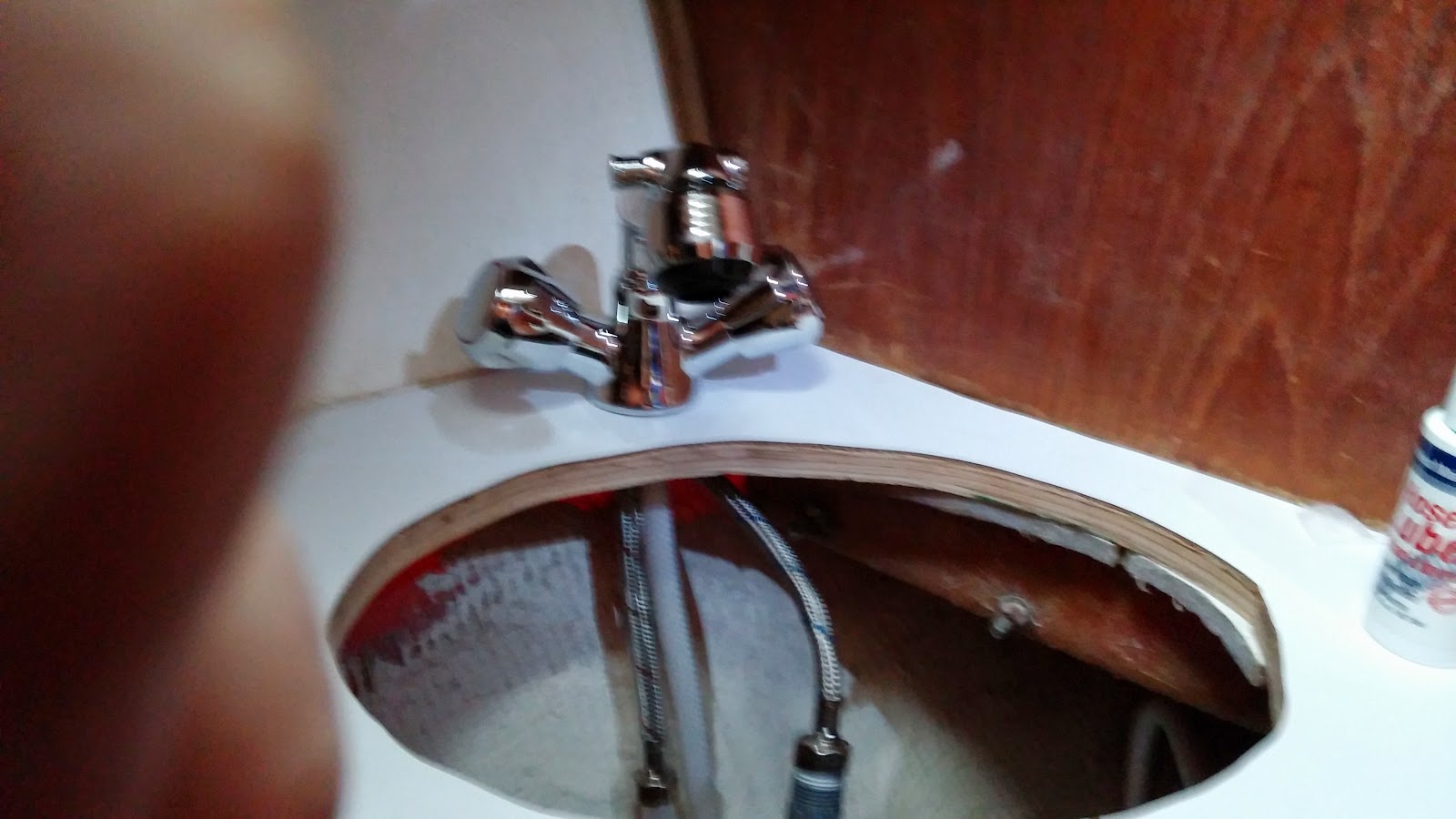 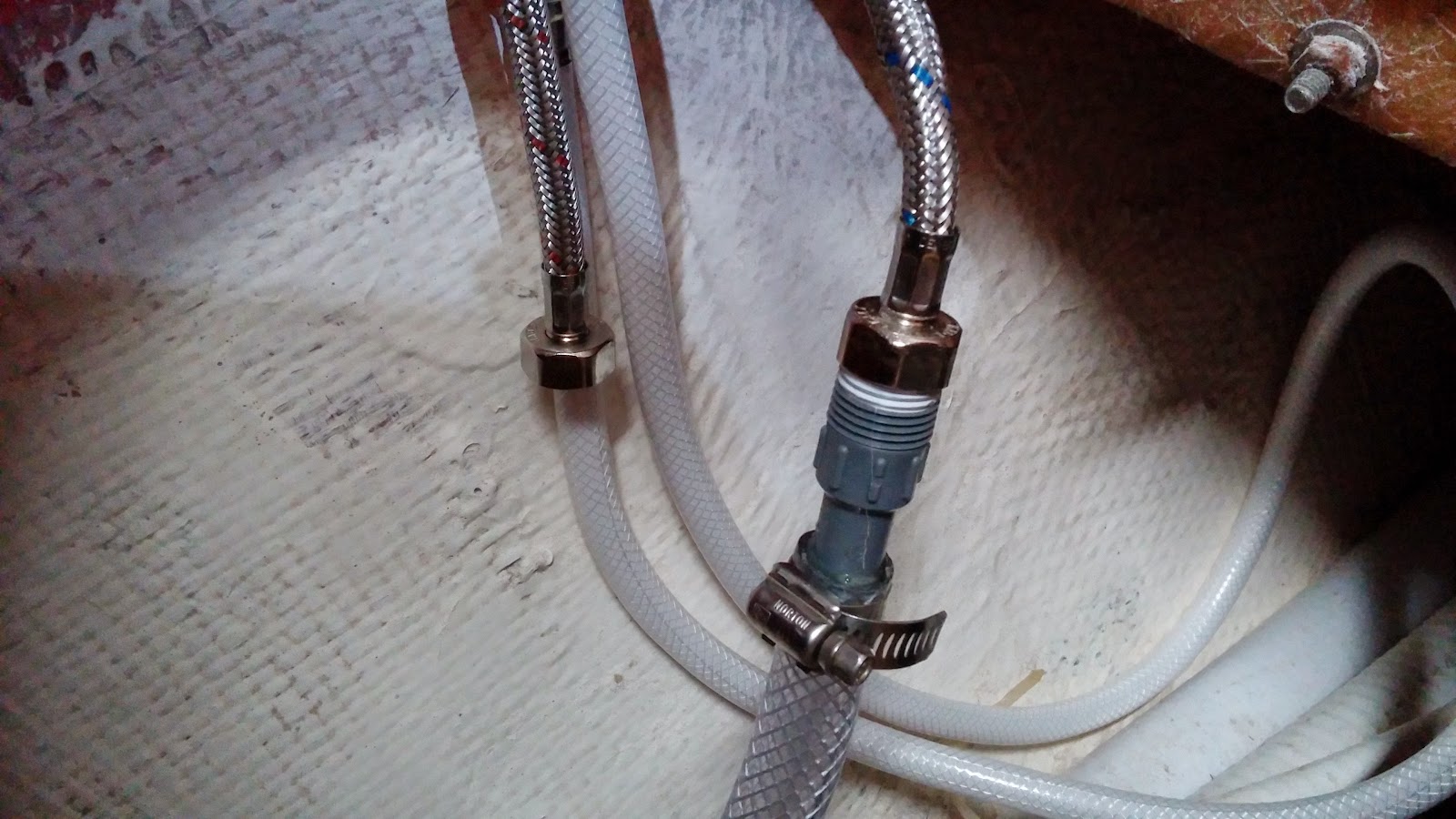 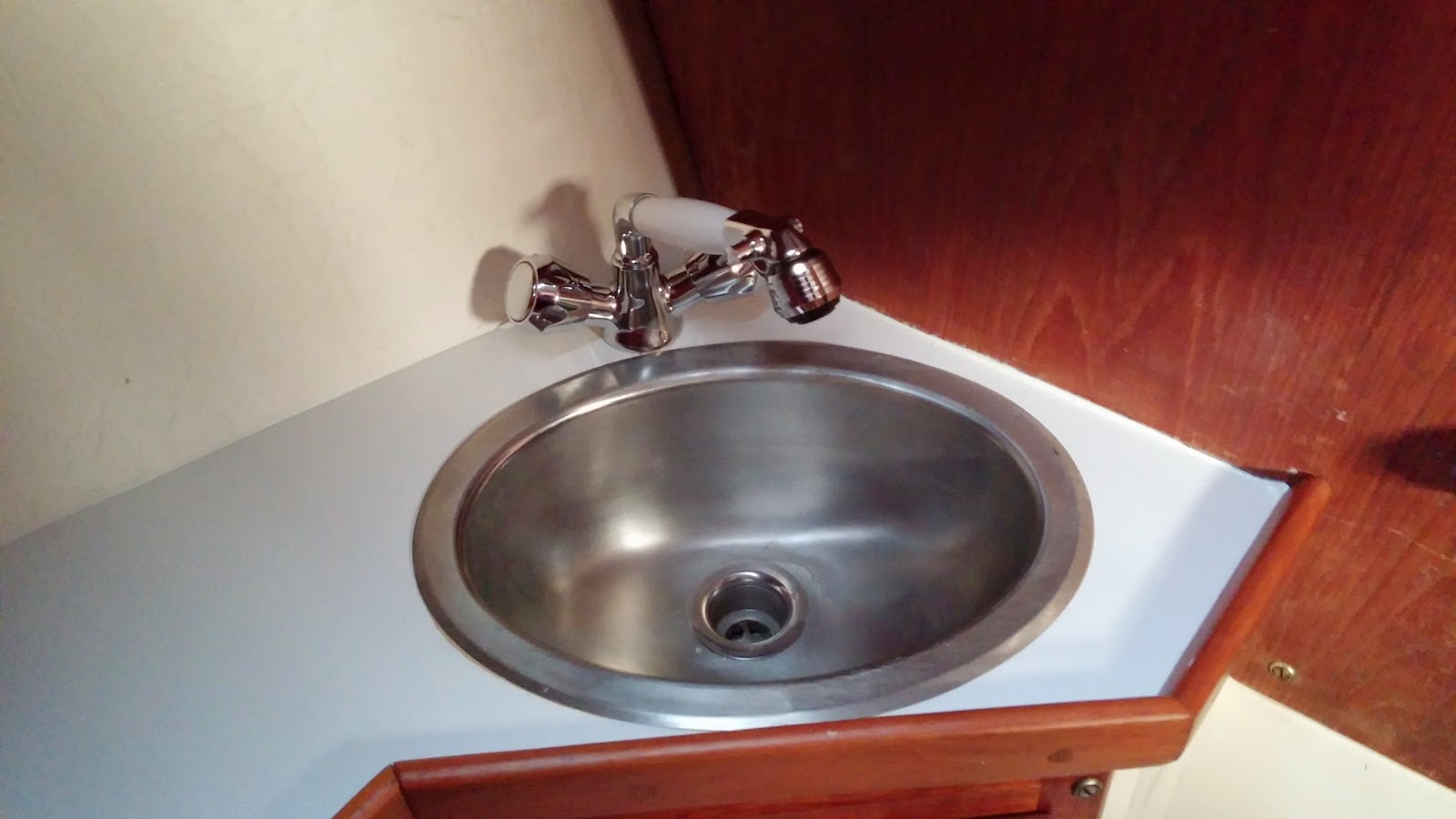 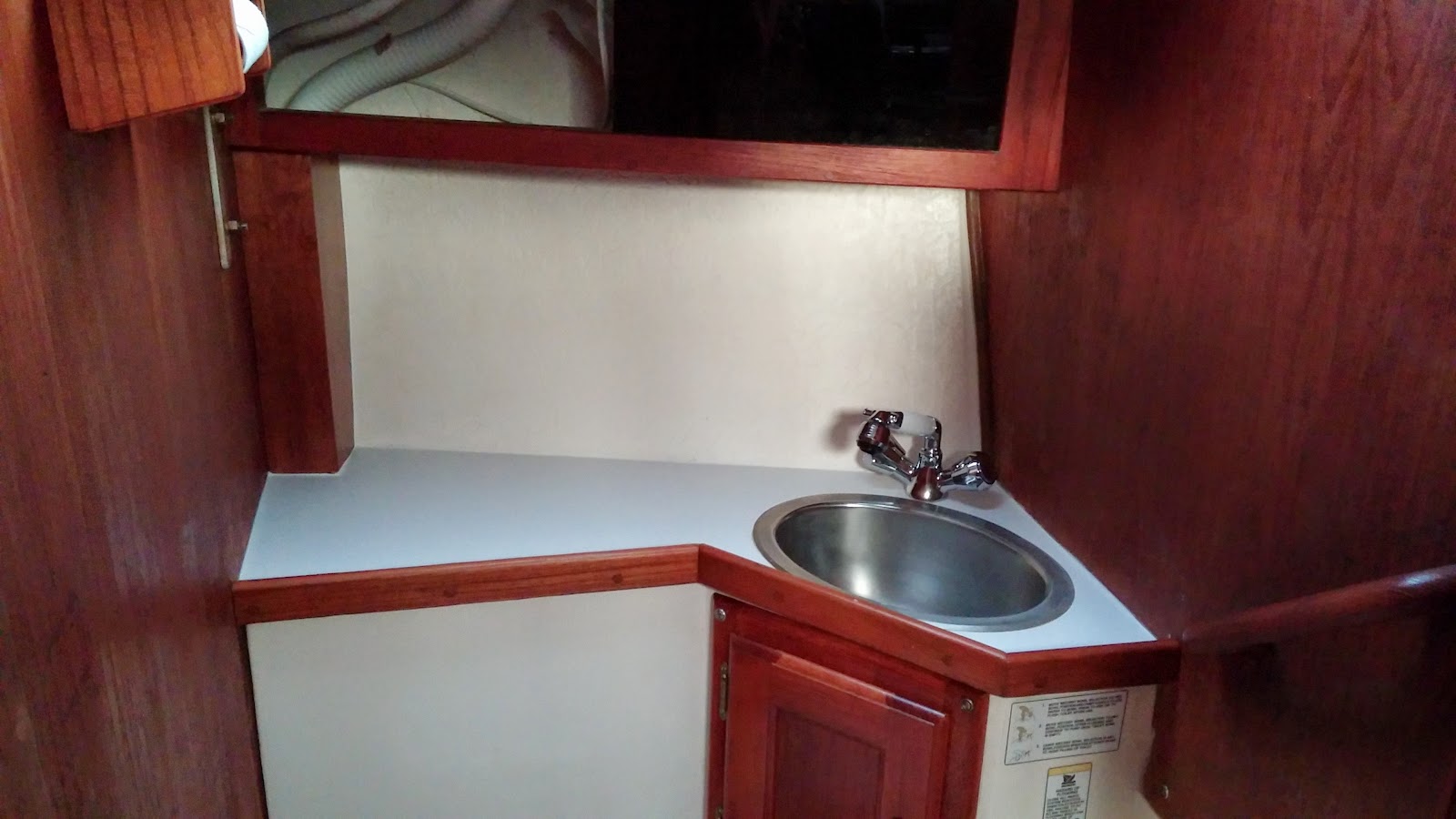 Then Just install the mounting bracket for the Shower head, and it looks like this! 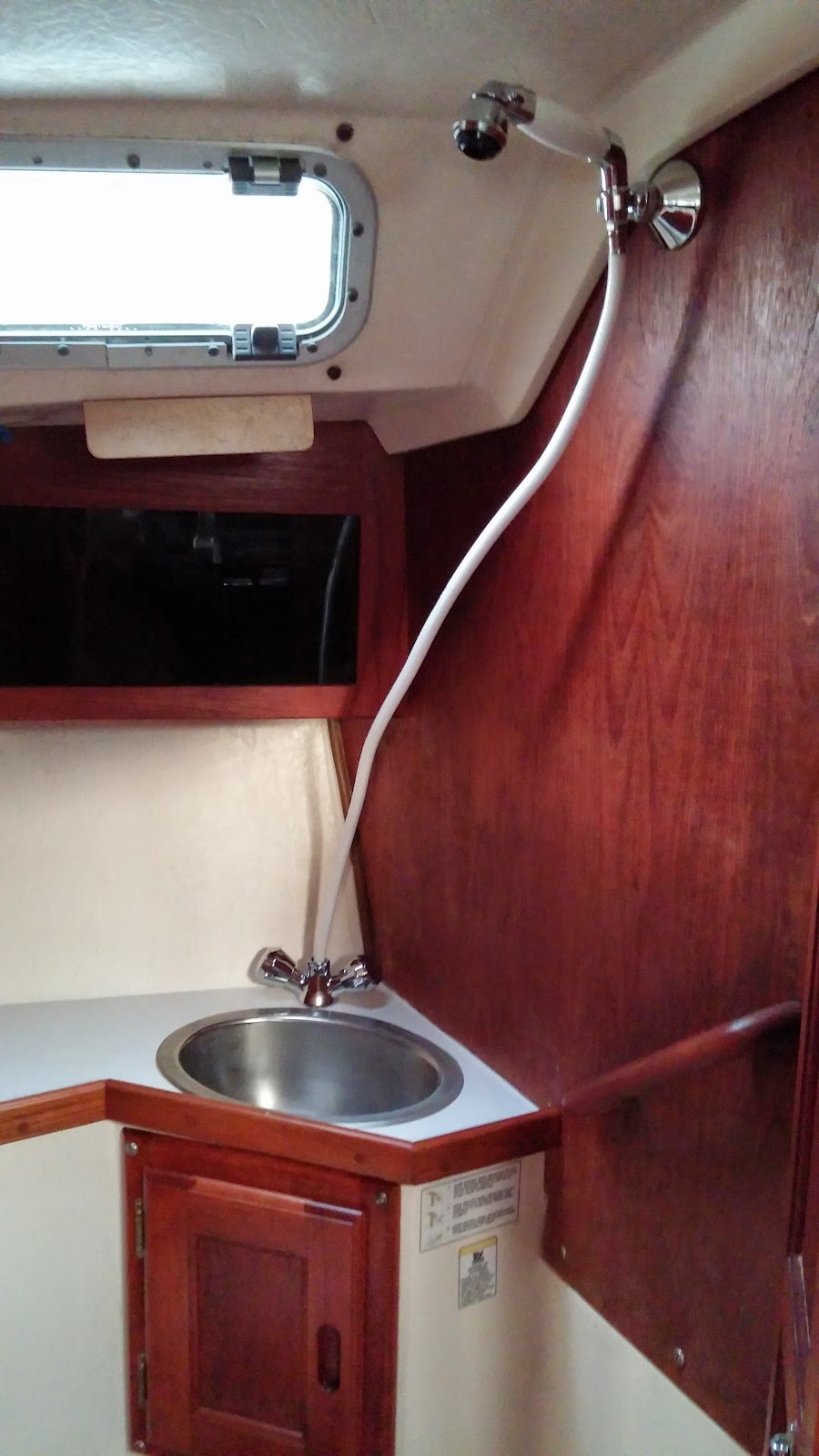 Now, tell me true, Which head to YOU prefer?

Nice, bright and no ugly hoses Visible!  Note the cover I made for them on the left... That will be a topic for another post....

Let me know what you think by leaving a comment below!!!