I did not have a boom vang, so my sail shapes were not what then needed to be. I did have a topping lift, but in my book it was pretty useless when you had strong winds, because although it could lift the boom up, it could not pull it down.  Fortunately, Garhauer Marine had an upgrade package for the Catalina 30, that included a new traveler, all new sheet blocks, new jib sheet blocks and, a nice and shiny solid boom vang!  The solid boom vang will do two things for me.

1. it will provide proper tension to the Main sail, and
2.  will allow me to REMOVE the topping lift, which was always a pain to adjust, and most of the time just flopped around chafing the main sail's leech.

Now, Garhauer makes some really, heavy duty, quality stuff, all of which has a Ten (10) year warranty.  What they LACK are technical writers, evidently, as NONE of the (Not cheap) hardware came with any type of installation instructions.  Not even any Suggestions for installation!  NOTHING!  This blew my mind, so I did an internet search for installing the boom vang, and came up with close to nothing.  Even by consulting the Oracle (Google), The only information I could find was on some discussion threads on SailboatOwners.com.

So here are my instructions for installing the Garhauer Boom Vang.

You will need to buy the largest Stainless steel bolts that will fit into the holes in the bracket. (I took the bracket with me to the Hardware store.) You will also need the proper sized drill bit and a tap to make threads for your bolts to screw into. (my hardware store guy had a sheet that said "for the tap of X size, you need a drill bit of Y size) You will also need some anti-seizing compound (more on that later)

First, you need to install the Mast bracket.  It needs to be installed as low on the mast as possible to provide the leverage that will be needed to lift the boom.  In my case, I had to remove the main sheet block, then had to grind the mast a bit to get rid of some bumpy excess mast paint.  I just used a dremel rotary tool to do this.   The Bottom line is that the bracket needs to be centered, and fit flush against the mast.

I drilled and tapped the two center bolts first, snugged them in, then did the sides.  Drilling and tapping the holes is fairly easy.

Then it is time to tap in the threads.  I used a bit of oil to help with the tapping process


I was using stainless steel bolts to attach the bracket.  This is because stainless doesn't rust, so no worries, right?  Not so fast, slick... As I learned in my Aircraft Maintenance school way back in my early Air Force days, there is this thing called "Galvanic Corrosion" that happens when you have 2 dissimilar metals (in this case it would be the Stainless Steel bolts and the Aluminum Mast) in contact with each other in the presence of an electrolyte (in this case, water).  If I left it the way it was, the bolts would corrode the aluminum, and at the very least, would lock the bolts in position never to come out again, and at the very worst, weaken the aluminum to the point where it would fail and the bolts would pull  out, along with a chunk of the mast. 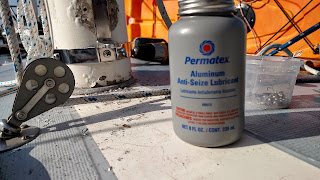 Enter Anti-Seizing compound.  I picked this at my local Automotive Parts store, which made it very inexpensive, compared to West Marine. What this stuff does is to coat the bolt with this goopy (that is a technical term! lol) liquid aluminum stuff, that will keep that corrosion from happening.  Application is simple.  Liberally Goop on the compound with the provided brush, screw in the bolt, wipe off the excess.  Now, if the mast wasn't Painted, and the bracket was going to be in direct contact with the bare aluminum, I would have also "painted" the back side of the bracket before bolting it in.


The Bad part about this stuff is, well, it tends to get EVERYWHERE, so have several paper towels on hand to clean up the mess, and, in hind sight, I would recommend wearing  latex gloves making cleaning your hands much easier.

The next step is to attach the boom Vang to the Mast bracket using the supplied bolt.  Now at this point in the process, there was conflicting information regarding the technique you should use to locate the position to mount the bracket to the bottom of the boom.  What I ended up doing was this:
Pull on the Vang control line to fully compress the boom vang, and tie off the line, so the vang remains fully compressed.
With the sail DOWN, use the topping lift to lower the boom to a position about 5 to 10 degrees BELOW level. (In reality you will never go this low, but this would guarantee that you would be able to tighten the main to the maximum extent, with a little room to spare.)

Raise up the Vang until the bracket is centered on the boom, and flush against it.  be careful not to move the position of the boom while doing this.  Mark the Center holes.  Drill and tap the holes, then attach the Vang.  The picture on the left shows the installation of the boom bracket at this point.

This is where you will find out if it is in the proper position.  the good thing is that if for some reason you find out that the boom position is either too low or too high, you can remove the bolts and move the bracket  forward or aft until the forward or aft bracket holes align with the holes you drilled, put the bolts in and try again.

In my situation, it turned out that my positioning was good.  How did I know?  Take a look at the following two pictures: 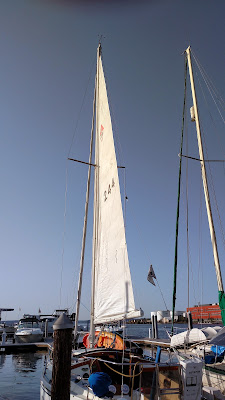 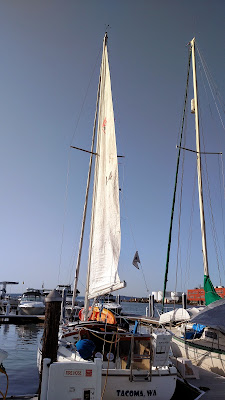 Now it was just a matter of drilling and tapping the remaining bolts, and figuring out where I was going to reattach my main sheet block that I had to remove when I started this project.  Fortunately, there was room at the base of the boom vang to attach the new Garhaurer block, and all was right with the running rigging.....


And that is all there is to attaching the Garhauer Solid Boom Vang!  It was (as usual) much easier than I thought it was going to be.