Cap'n... There be WHALES here!

September 30, 2015
OK... I freely admit I stole the line for the title of this Post from "Star Trek, The Voyage Home" But I thought it was appropriate for the content of this post.

It was my Sister's first day of her six day visit aboard Dulcinea, and she was excited, because we were heading across the Strait of Juan de Fuca, then into the Famed Haro Strait.... Famous for seeing whales that is.

It was a beautiful day on the water, A little on the chilly side, but not bad.  Based on feedback from friends, I timed the crossing with the outgoing tide, which really helped.  Wind was light, so we motored across the strait, aided occasionally by the Jib, which, when the wind was right, would add about a knot to a knot and a half to our speed.  There really wasn't enough wind to justify raising the main though.  When we entered the Haro strait, and my sister started into high surveillance Mode... getting her camera ready, and manning the binoculars, as evidenced in this video.

Shortly after entering the Strait, we saw the first of many whale watching boats!  They came from the east, crossed our bow, and continued west, towards the coast of Vancouver Island.  Dang!  looked like all the wales were well to the west of us.... Mile after mile, Hour after hour came and went, and no whales...


My sister then tells me, "you know, if we don't see any whales, it is all going to be your fault, because you are the captain, and I will want a refund!"
"Yeah, Right.... What-EVER!" I replied.

We continued churning northwest, approaching the Northwest corner of San Juan Island, where we would turn NNE after passing Henry Island, to head to Stuart Island.

Then, out of nowhere, we see THIS! 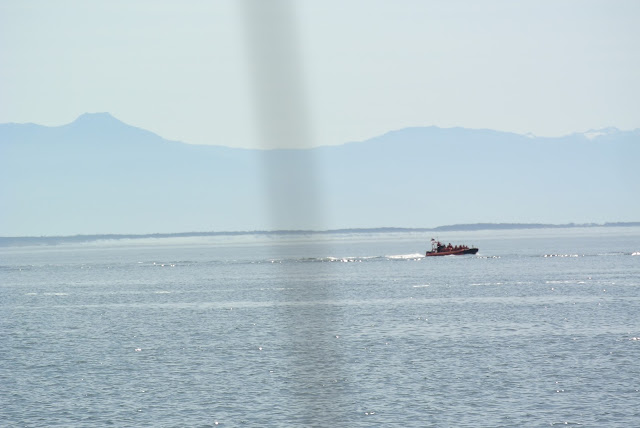 It was one of those Whale watching boats we saw earlier, but now it was crossing from west to east across our bow, heading toward the gap between San Juan Island and Henry Island!   "Let's Follow them" my sister says, "Sure!" I replied.  The only problem was that it was like a Moped following a sports car.   I generally am not in a hurry to get anywhere, so the comparatively slow speed of a Sailboat never bothered me.   After all, as the saying goes "If you want to go somewhere really fast, you have no business on a sailboat"  But at that moment, I wished that I had hydrofoils and could zoom across the water to get to where the whales were.  We could see all the boats in the distance, and I could even see a dorsal fin or two through the Binoculars,  but it took forever to catch up. 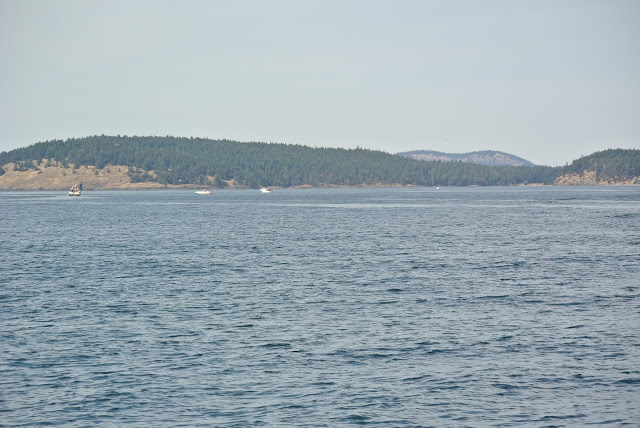 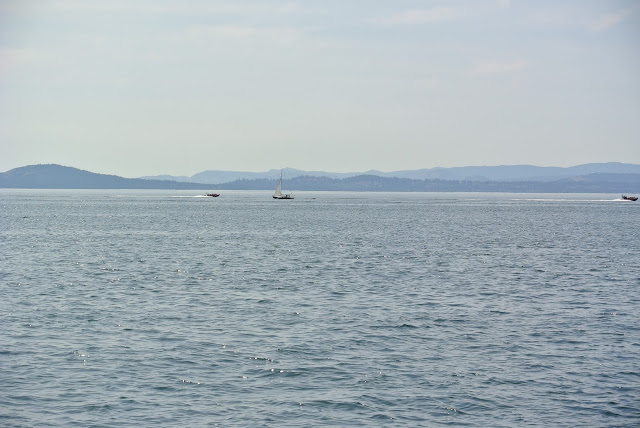 But when we finally caught up, they had move north, so we chased them again, and then.... EUREKA!  (All of the photos below were taken by My Sister) 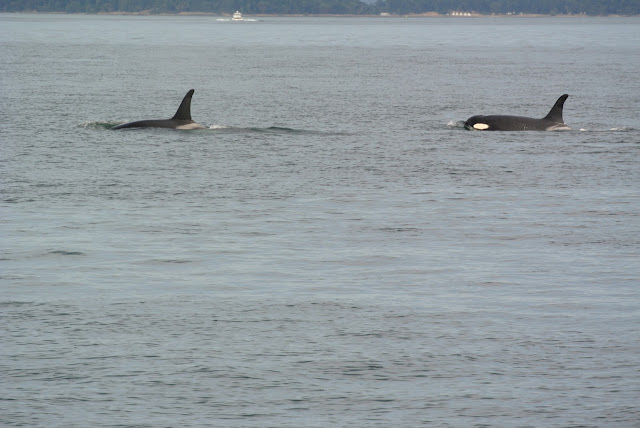 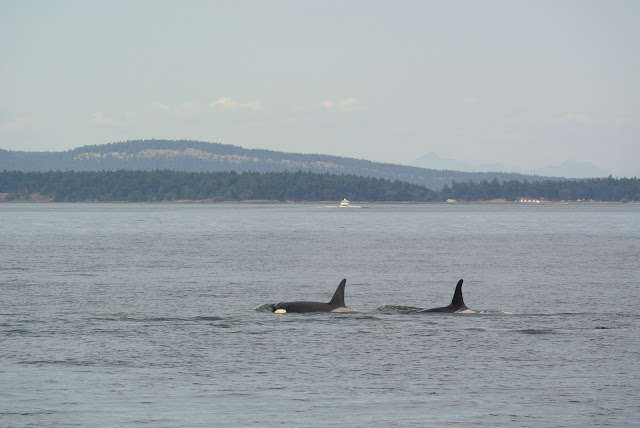 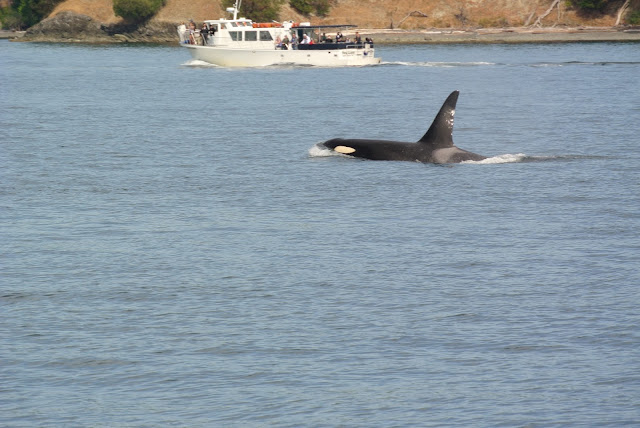 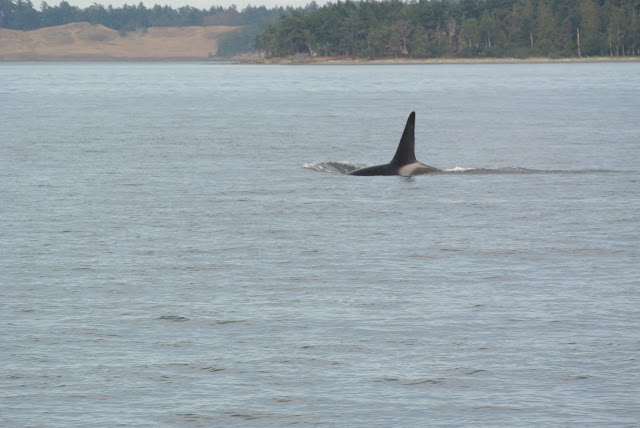 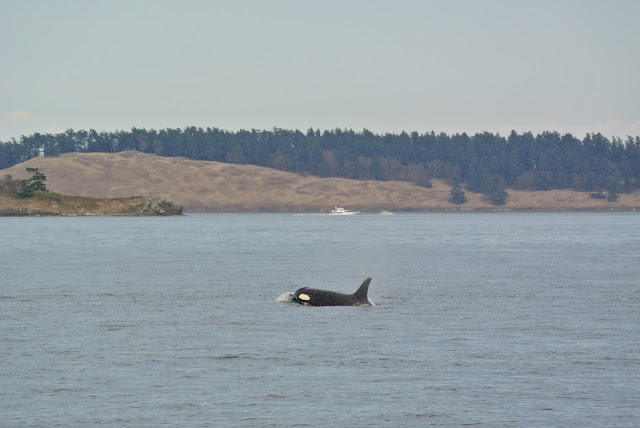 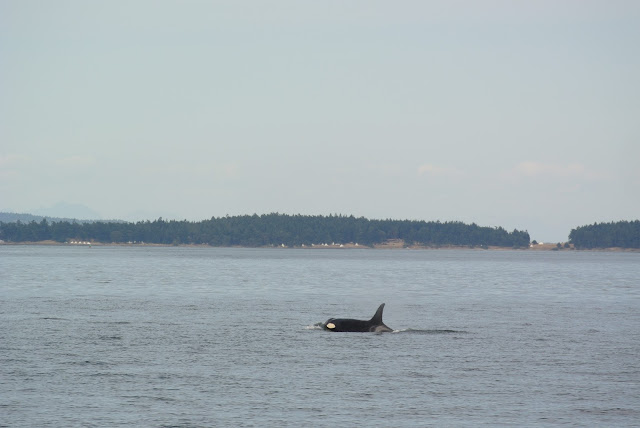 We ran with this group of whales for about an hour  or so, and were THRILLED that we were able to get these pictures, and be so close (well close, meaning a couple hundred yards or so) to them.  They are truly majestic creatures, and captivating to watch.  It was challenging to follow them with a camera and try to guess when and where they would surface again so you could point your camera in that direction and snap the shutter when they were actually above the surface.  There were so many of them in different places it made it hard to concentrate... a good problem to have though!  When it looked like all the whales had passed us by, we were getting ready to leave.  I looked at the guy in the whale watching boat next to us, and he pointed astern of us and said "there are two more groups coming!" So I turned Dulcinea around toward the direction they would be coming from and put her in neutral and waited.  And indeed, we saw two more groups coming!  They split off so one group would pass on the starboard side first, then the second group would closely follow on the port side.... CLOSELY being the key word here.  If we were Thrilled before this encounter, we were ECSTATIC after this one... Take a look!  (Warning.... I take terrible video by cell phone!)


As my sister said to me "They were so close to the hull, if you had any barnacles on it, they would have cleaned them off!"  and that indeed was the case.  I vividly remember my sister saying "THERE" and pointing straight down.  I looked down on a wierd sight.... all I saw was White and black, and it took a second to realize I was looking at the whales within, and I kid you not, an INCH of Dulcinea... oh, and then I remembered to point the camera at them, almost too late.   as a matter of fact, the whale you see in the video was the one on the OUTSIDE!  I didn't get footage of the one closest to Dulcinea... I have no idea how they could swim so close and not touch the hull.... they were huge... almost as long as Dulcinea herself (30 feet)!  They were also fast!  I figure they were doing 7 knots at least.

After it was clear they had all gone I looked at my watch... we had been running with this bunch for about an hour and 45 minutes... absolutely AMAZING!  I turned to my sister and said "So, how do you feel about the trip, and my captaincy NOW?"  She said "the trip is AMAZING and you are the BESTEST captain!"

I then turned around and said "Thank you.... That will be 99 dollars for the whale watching tour!" We had a good laugh, turned east and headed to Reid Harbor on Stuart Island.