Another Jewel in the San Juans - Stuart Island


After the exhilarating high of being in that pod of Orca Whales for an hour and forty-five minutes, my sister and I had to make way to the first scheduled anchorage in the San Juans - Reid Harbor on Stuart Island.

I had never been to this island before, and although I had read about it, and saw a DVD about the island, It still didn't compare to the real thing.   It was getting fairly late in the day when we arrived and we motored down the long harbor about half way when we found a pretty good place to  drop the hook.  In hind site, you have to go just about all the way in before you get to the Marine State Park.  The harbor is pretty long!

I didn't realize that a lot of the island consists of private land, and there are many people that live on the island year round.  This is true living off the grid, as they have to provide everything... water, sewage, power, food and so on.  There is no grocery store on the island, so you have to provision your house much like you do your boat.  Access to this island is only done in two ways.  By boat, obviously, or by small Plane as there is a small airstrip on the island. 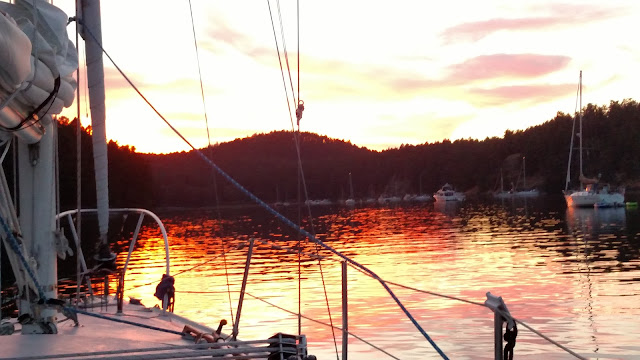 After a really nice sunset, and a good night's rest, we hopped in the Kayaks to explore the Island

one of the first things my Sister has to do when going out anywhere is to find things to take cool pictures of .... she has quite the eye... but don't tell her I said that... I have a reputation to maintain after all!  Here are some of the many pics she took... click on any picture to see a bigger rendition of it!


We decided to take the trail that would go to the school house and then on to the light house.  it starts  with going down a bunch of steps to get to the beach where we had some fun with some driftwood.


After traversing the beach, the trail picks up on the other side, where you go back up, but not as steeply as you came down.  it is a very gradual incline, for a couple of miles or so, and then you will come onto the school house(s).    there is an old and a new school house.  The new one is still actually used for the kids that live on the island, albeit there are not a lot of them, and this school only goes through middle school I believe.  High school is done at nearby Friday harbor.  How they work that out I don't know.... I imagine they stay in Friday harbor during the school year, coming home on holidays and such, but that is just a guess.

The old school house is open as a museum, with a lot of history about some of the inhabitants of the island.  it was really interesting.  there is an adjacent building that was the teacher's quarters, and it was set up just as if someone was living there.  a really small, but cozy cottage.

The trail continues on and comes out to a road, which you will follow most of the way to the Lighthouse.  Along the way you will pass by several of the houses that dot the island.  We particularly liked this one, well, rather the whimsical pieces in the yard near an old barn.  Take a look!


And the Views were tremendous!

Along the way to the lighthouse, you will run into a "Novelty Store" with a very unique business model.  It is run by a local family.  along side the trail you will come upon a "Treasure Box".  There you may purchase printed T-shirts, hats, and a  bunch of other souvenir items.  Each item comes with an envelope. When you get home from your vacation, you simply put the payment for whatever you bought in the envelope and send it off in the mail.  Alternatively, there is a web site you can go to to make your payment. This is all based on the honor system, and has evidently been in business for 13 years or so.  What a great idea?  because who carries around cash, checks or credit cards when you go out on a hike?  I know I don't!  I picked up a hat, and my sister got a shirt.  I can't believe that neither of us got any pictures of it... I guess we were to engrossed in choosing what we were going to get.  There were a ton of choices!

Eventually you will come out at the Turn Point Light House on the northwest most tip of the island.  It is a great place to sit down and have lunch like we did.  You can also take a tour of the Lighthouse keeper's quarters, which have been recently refurbished in the original design.  they even had Period-Appliances... really old refrigerator and stove and the like.  The tour is lead by volunteers who belong to the Turn Point Lighthouse Preservation Society . It was really informative.  at the time we were there, the actual light house was closed, but you could peek in the window.  It has, of course, been replaced by an automated system, but the building was cool! 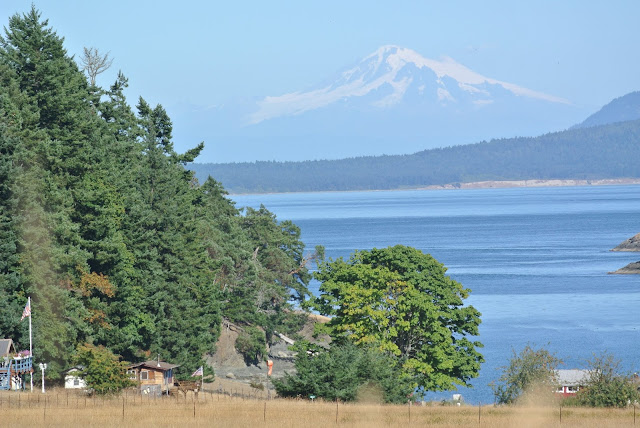 When we got back to the beach, and before we headed up the "Ba-zillion" steps, we ran into a large group of Kayakers.  We stopped and talked to them for awhile.  They were part of an organized lead by a professional company that leads groups all around the San Juans.   It was impressive that they go on such long trips by Kayak.  Among them was a gentleman named Jim who asked me for some assistance getting up out the Kayak he was in.  He was in his 70's and this was his third year doing these types of tours.  I hope I am doing that well when I am in my 70's!


After a really good hike like that, it was time for  really good meal.... I was starving!   so we decided to go all out.... and here you have it.... Grilled Salmon, garlic mashed potatoes, Grilled Zuccini, and my sister's Sundowner of choice, Margharitas! 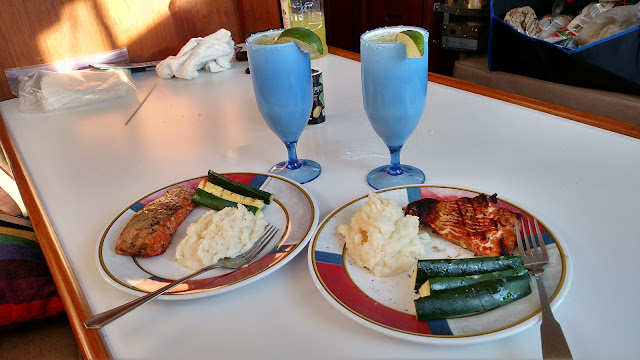 After dinner it was off to find a good place to watch the sunset.   The only place we could find, the beach we were on earlier, the sun went down right behind a small island.... but we decided to take a sibing selfie anyway! 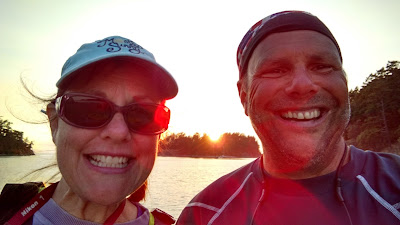 Then my Sister got creative and decided to use the back lighting to her advantage.... here is the result! 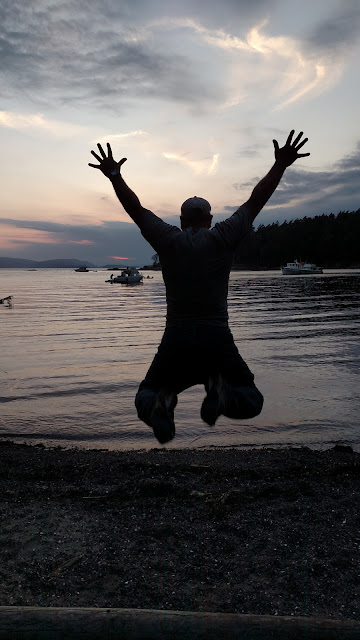 Pretty cool, eh?  My sister has her moments.  After the sunset, it was back to Dulcinea where we had more Margharitas and I beat my sister at Cribbage... well, maybe she won a game or two....

The next morning, while we were having coffee in the cockpit (my favorite thing to do when I am out on Dulcinea), Jim and the tour group he was with paddled by, heading off to another Island...

So with that, we finished up breakfast and made ready to up anchor and head out to the next stop on our trip... Sucia Island... one of my favorites! Well, Sucia used to be my favorite island, until I came to Stuart island... now I have a couple of favorites!  I will definitely be back!