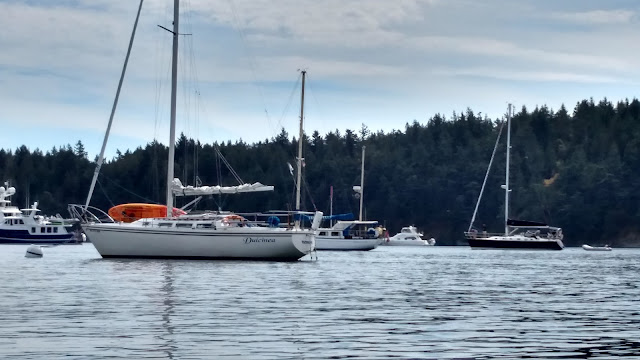 PROLOGUE:  This was the last part of my trip to the San Juan Islands in August 2015... yeah I know... almost a year later, but it is still good!

This was supposed to be the most laid back part of my Vacation... but it turns out that Mother Nature had different plans for me.  It started out just fine.  I was back at Echo Bay at Sucia, one of my favorite places.  I arrived on Wednesday and Kayaked to Ewing cove and back. it is pretty picturesque from the water.


As I was coming back from the cove, I took a detour to gawk a little at this guy..... 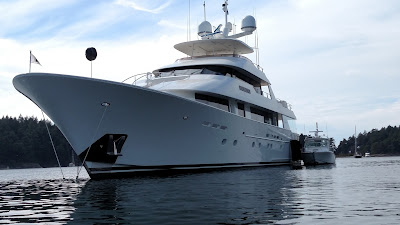 this is the M/V Excellence.  I couldn't find out much about it other than it is privately owned out of Seattle.  It is about 130 feet long... 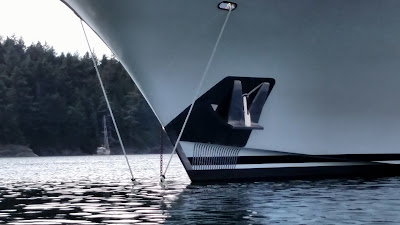 She had 2 massive anchors... here you see the starboard anchor deployed with a big snubber line on it...

On Thursday I did some hiking to Ewing cove.  It is only about a 3 mile hike, but it had some pretty good views along the way as well! 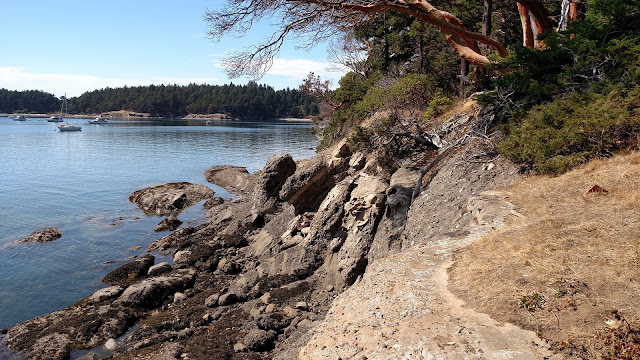 On Friday, I decided to do, well, nothing but hang out on Dulcinea.  I put up my Hammock-Chair

and Hung out (pun intended) and read on my Kindle... by mid afternoon, it had suddenly grew eerily quiet, and I took a good look around.... there were only 2 other boats in anchorage that hours earlier was filled with 50 - 60 boats!


I decided to do some investigating as to why that might be....  I was shocked with what I found out.... the weather storm that originally was supposed to stay south of the San Juans had now shifted its course and was coming straight for them...   all the weather reports I could find agreed that it would hit the San Juans by 0930 to 1000 the next morning.

I immediately started stowing everything as I was going to have to make a run for it at o-dark-thirty in the morning so I could make it to Friday Harbor before it hit.

My alarm went off at 0500 and I was in my Foulies, off the mooring ball, moving towards Friday Harbor, and drinking a cup of Joe by 0530.  I can move fast when I want to... Fortunately, I didn't have to worry about hitting anyone in the anchorage as there were only 2 boats left.  I made a bee line for Friday harbor, which took me about 3 hours in some pretty rough water.  I was able to make a short video along the way....

I made it there well before the storm hit, but, for the first time, Friday Harbor disappointed me.  They were taking a "business as usual" approach, and said I couldn't ask for a Slip before 0930.  I mean with a storm of this magnitude bearing down on them, it seems to me they could have done a little more to get all of these boats that were tied up on the breakwater in before the storm hit, if even temporarily....  As it was, by the time I got a slip assignment, the storm was in full force and there was no way I could move.  here is another video I made when the storm was sending winds of 40 mph or so:

I believe the top winds we recorded there on the public dock were around 45 to 50 MPH.  It was just a surreal situation.  Finally the winds died down enough to move Dulcinea into the harbor, and I made it to my slip by about 1330, and was able to tidy up, shower and change, ad made it to Haley's Sports bar in time to watch the Seahawks pre-season game, have a meal and a beer or two,  so all was not lost﻿.

The next day I headed out around 0900 so I could time my exit through Cattle Pass into the Strait of Juan de Fuca at near slack tide. Both going through the pass, as well as my entire crossing of the Strait was eerily quiet and uneventful.  There was pretty much no wind, so I motored all the way to Ft. Flagler where I caught a mooring ball.

That night, was the most uncomfortable I had ever spent on Dulcinea, as the southerly winds came howling through the inlet there starting aroung 1230.  I was lying in the v-berth, bouncing up and down, and I remember praying that the Mooring Ball and my bow lines would hold.  It died down around 0400, and I was able to get some sleep again.  I got up around 0930, had some breakfast and made my way out of the anchorage.  As I exited and started to head to round the the northern head of Marrowstone Island, I was making about 7.2 knots.  I remember thinking that I would be in Kingston by noon at that speed, and I was all fat, dumb and Happy... right up until I rounded the Island and headed south.... into the full brunt of the southerly wind that continued to blow into the mid to high 20 MPH range, with really confused seas, and it slowed me to about half a knot to a knot SOG.... it was the start of a really long day.  I couldn't even leave the cockpit as the seas were just too rough for Audrey, the autopilot to handle.

Notice there are no pictures here.... I literally couldn't take any... too rough.  The bottom line.... 9 hours and 30 minutes to travel about 19 miles.  By the time I hit Apple Tree Cove and the Kingston Marina, I was exhausted.    there was an open slip, so I snagged as quickly as I could.  it was about 6:30 pm... I took a "Hollywood" free shower (one thing I love about Kingston... free showers) checked the weather forecast for the next day, and it looked like a carbon copy.  Good thing I put an extra day into my schedule... So I just hung out at Kingston for the next day.  Hearing about my trip to Kingston, my Brother in law insisted on signing on as crew for the last leg of the trip to Foss Harbor Marina .  As Murphy's law would have it, now that I had some Crew, the weather was no problem, and the trip uneventful...

If there was one thing that I did learn during this trip... Check the Weather, and check it at least a couple times a day!