The time had come.... I am guessing it is one of the most anxious moments for Boat Owners.... we have to have it hauled out of it's natural environment and have it propped upright on dry land.

This would be my first time hauling out my boat.  I was pretty nervous because I didn't know what to expect during the Haul out, nor what problems the haul out might reveal... a Separated Keel, resulting in the infamous "Catalina Smile"? A worn out Cutless bearing? a corroded Prop and/or prop shaft? Deteriorated Thru Hulls?   as it turned out, all of that was going to be the LEAST of my problems that day.

I decided to have the work done at CSR Marine at the City of Des Moines Marina.  This was Primarily to a good deal I found out at the Seattle Boat Show.  If I had them do the bottom paint on my boat, then they would give me a Round Trip Haul out for free (about $250 value).  Plus they had some pretty good recommendations by some of my fellow boaters here. 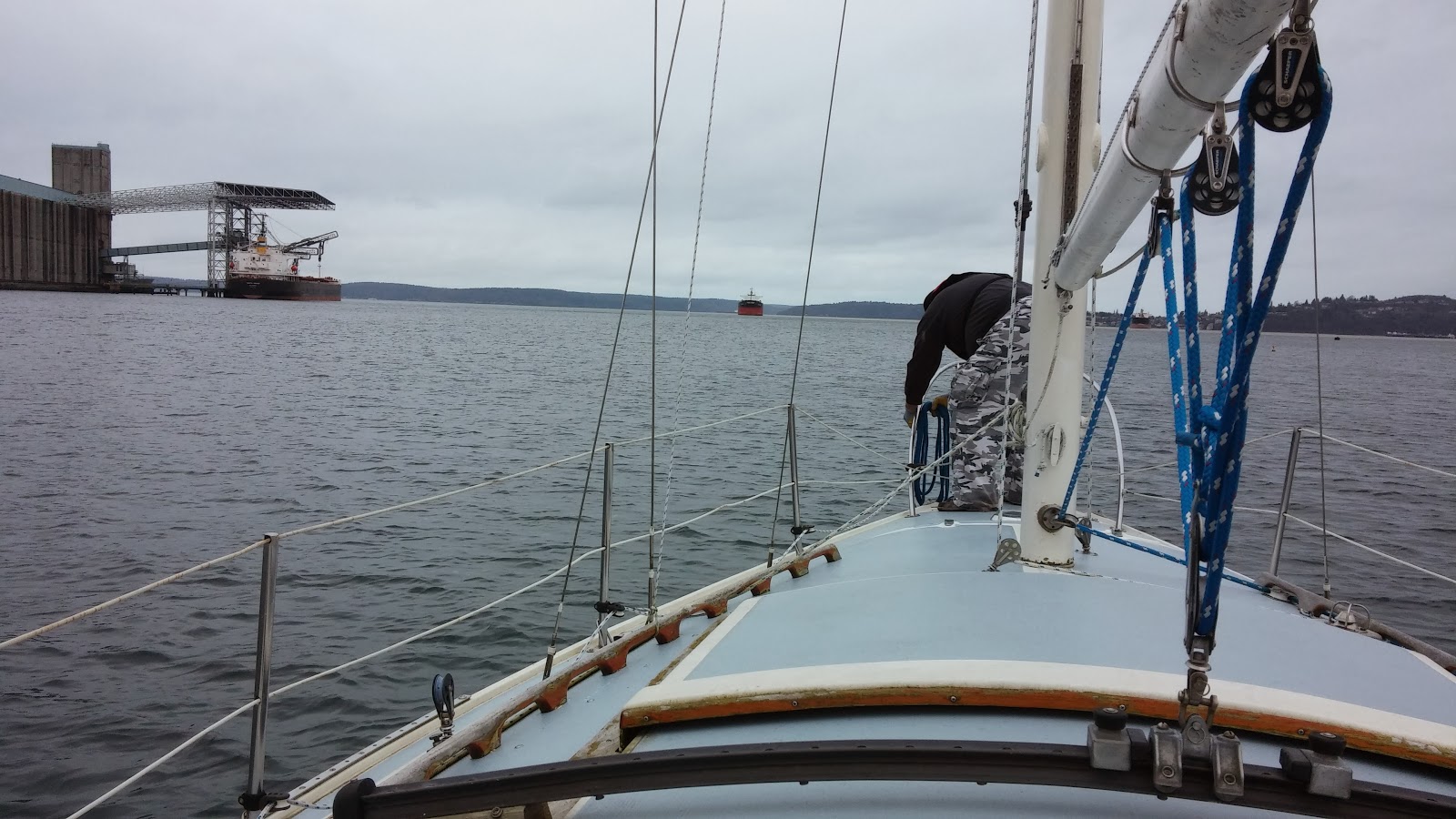 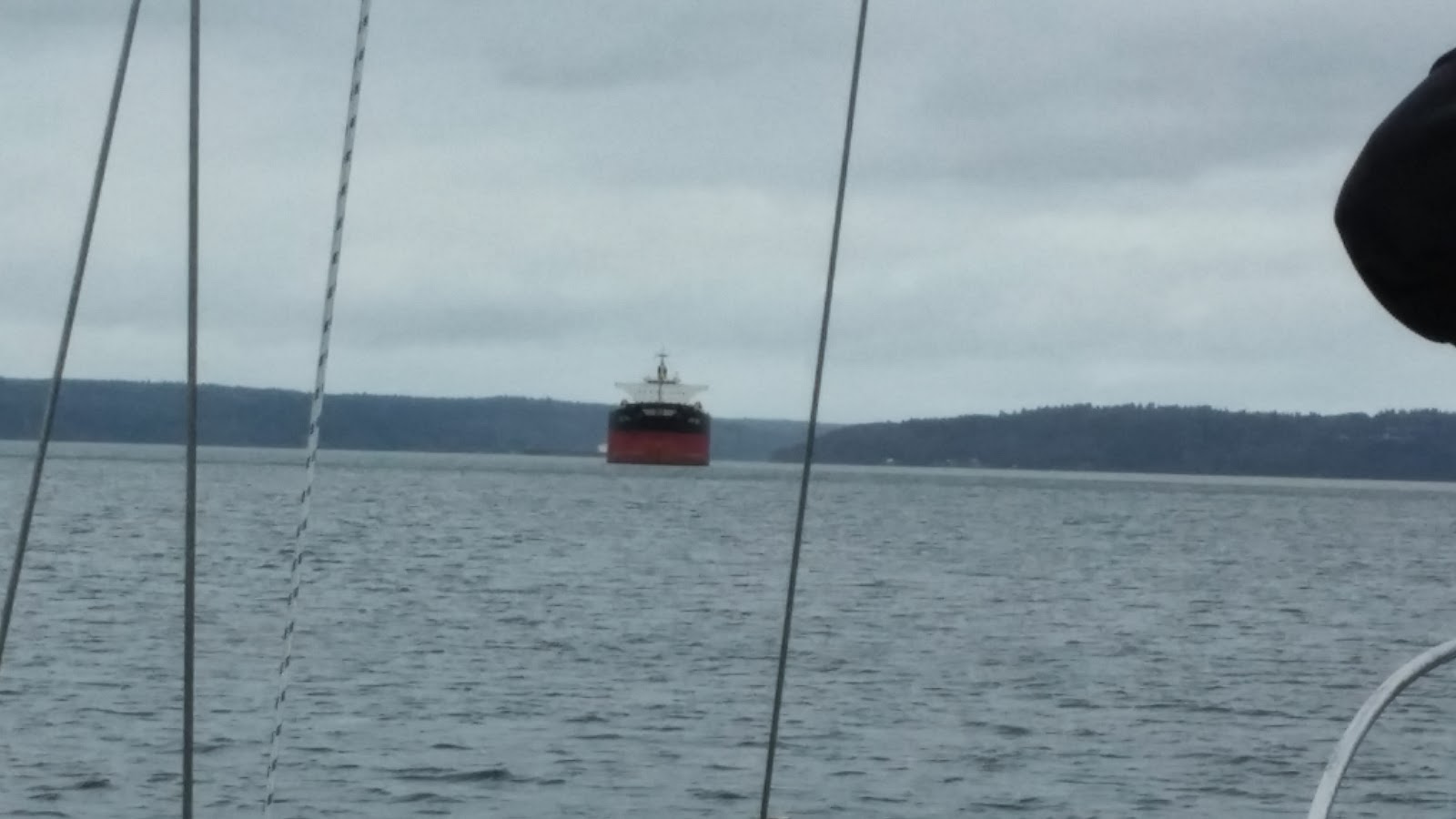 We knew the weather was going to be wet, but other than that it was supposed to be fine.... I am so gullible sometimes....  The early part of the day went as planned.  My Brother in law and deckhand came over and we both drove to Des Moines, met up with the guys there to confirm my haul out time for 2 pm, and to get the lay of the approach to the haul out dock and to the marina itself.... no problem!  We drove back to Foss harbor, cast off and headed into commencement Bay, and all was still fine... see? What is a little rain to a couple of of Northwest boater guys?  At least the seas were calm, and the wind wasn't too bad..... well for now anyway.  we rounded Brown's Point to enter the east channel headed to Des Moines, and things changed a little bit.  the wind picked up a bit, and we started seeing small whitecaps. No big deal... Right? 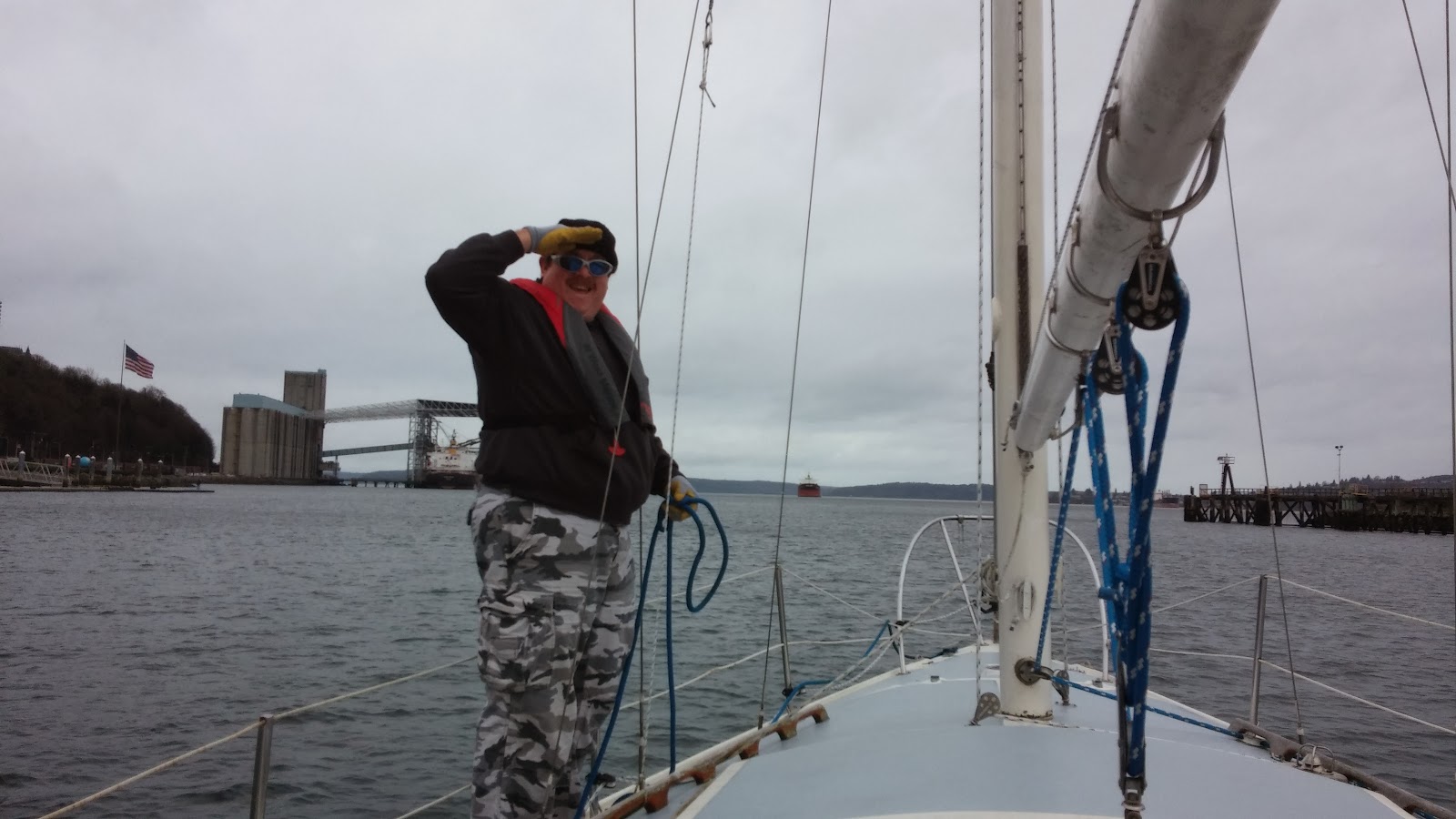 You will notice that there are no pictures of this trip once we got into the east channel.... that is because I was holding onto the tiller with BOTH hands, and Lynn was holding on with both hands to keep from getting thrown overboard in the swells AND wind that continued to build.  there was no going back at this point, and it was all I could do to keep the following seas from hitting us beam-on and rolling us over... we ultimately started surfing down 8 foot swells, and i had to keep fighting the current that wanted to push us to Starboard (to the right)... away from the narrow opening to the Marina.  The winds gusted to about 30 to 35 miles an hour further adding to the havoc.

Somehow, I managed to fight the current, wind, and swells to make the fairly narrow channel into the Marina.... I Breathed a sigh of relief after we finished the hard right hand turn to get behind the Breakwater, and relaxed a bit.... Wrong Move... the strong current and wind started pushing the bow towards the rocky breakwater, and I scrambled to straighten us out.  we found the entrance to the lift area, and saw they were moving the big U-shaped boat lift into position for us.... Nice! a straight shot into the lift and we are done!  Not so fast! the lift operator was saying something... what? I have to BACK in?  Normally this wouldn't have been too bad, but we were fighting some serious wind and current, and there was not much room between the very expensive yachts on either side!  Normally they would have us exit the boat and they would have used the bow and stern lines to muscle the boat into position... but not today!  Five tries later, we were finally over the slings they were brought up to hold us in place.  Phew! some minor adjustments to the slings and they started lifting the boat out of the water.... with us ON it!  Here is a short video... if it looks like I am tired here... it is because I AM!


Now, in my gut, all last year, I thought this boat was sluggish.  I didn't really have anything to back up that feeling, no experience or anything, but still, I felt it was slow.... Now I know why. A video and pictures should say a thousand words here....

This Video shows the haul out of the Sail Fish, and the uninvited guests on the hull..... NO WONDER it was so sluggish! 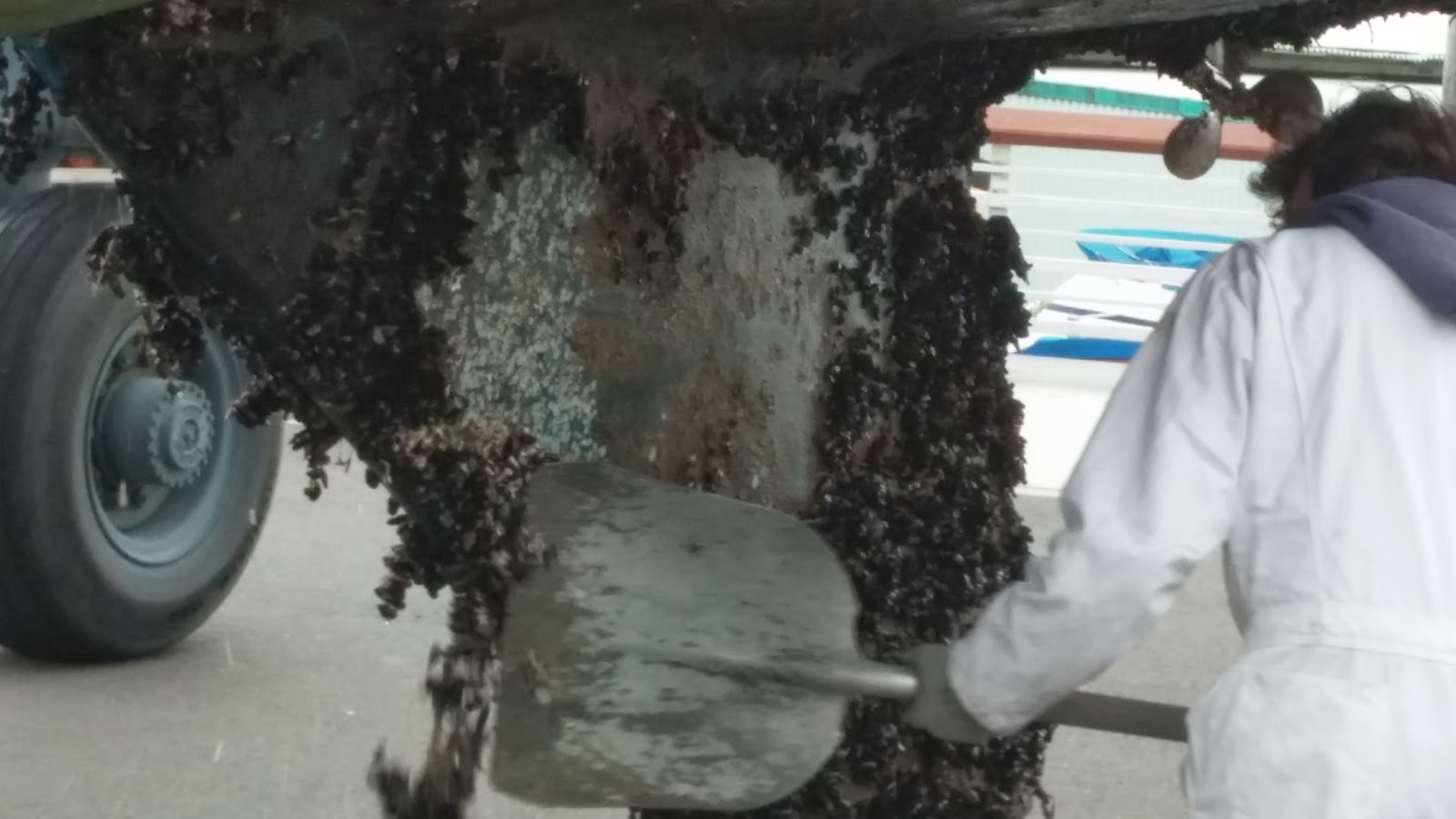 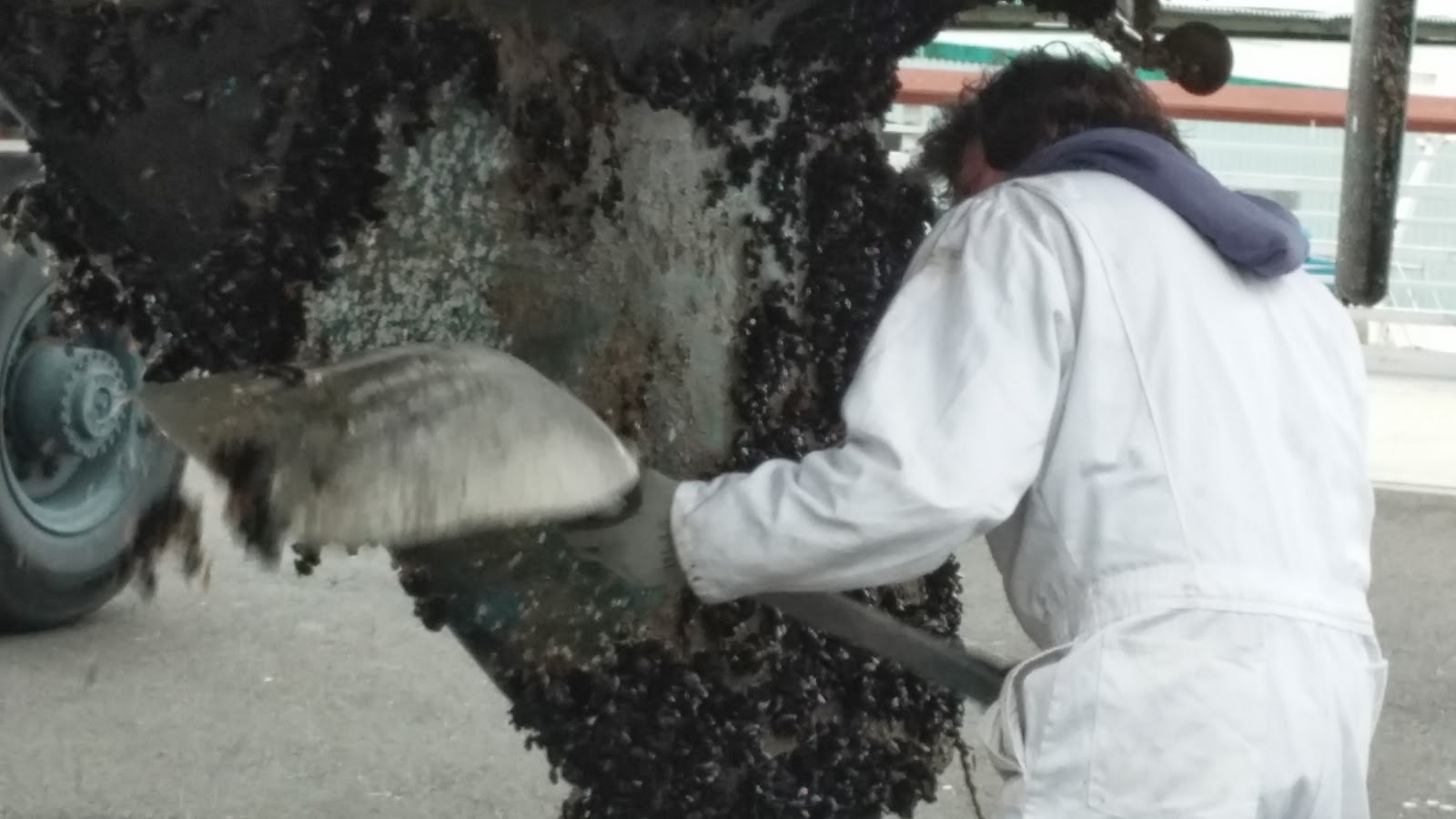 So, while they continued cleaning and pressure washing the hull, we were starving, and I needed a beer to settle my nerves!  So we jumped in the truck we pre-positioned earlier, and went off in search of food.  we found a nice little Pizza and Pasta place not far from the marina, and they served beer too!  Black Butte Porter even!  Things were looking up!

When we got back down to the Marina, they had finished the initial cleaning and survey, and had put the boat in a "Cradle".  I found that aside from some cosmetic Osmotic Blisters, NONE of the bad things I worried about earlier were present.  Keel is firmly attached, Prop and Shaft in good shape, so is the cutless bearing.  it really just needed a good sanding and a couple of coats of Anti-Fouling paint.  The Hull really needed a good buffing as well.  Well we are in the right place for that! 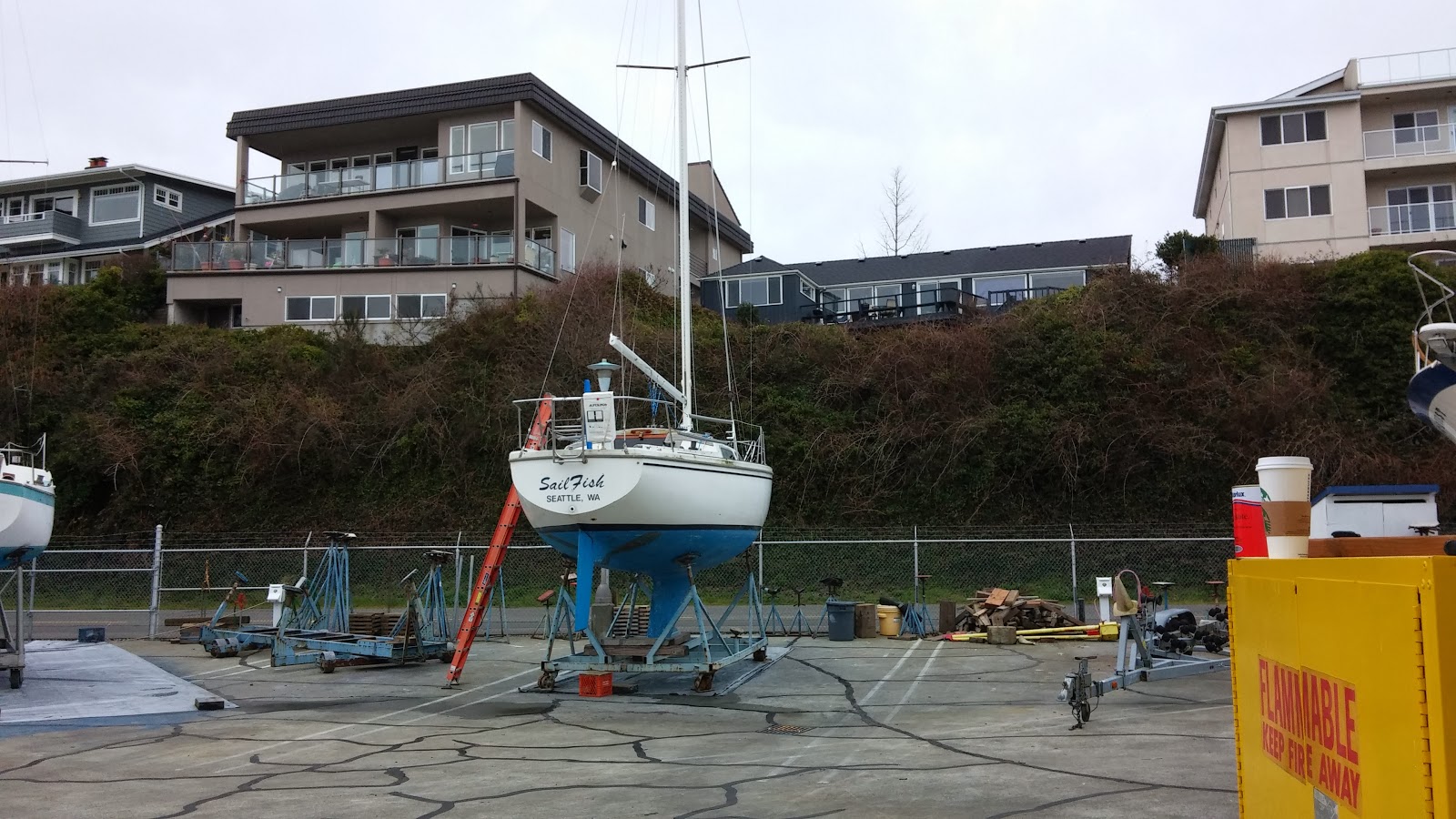 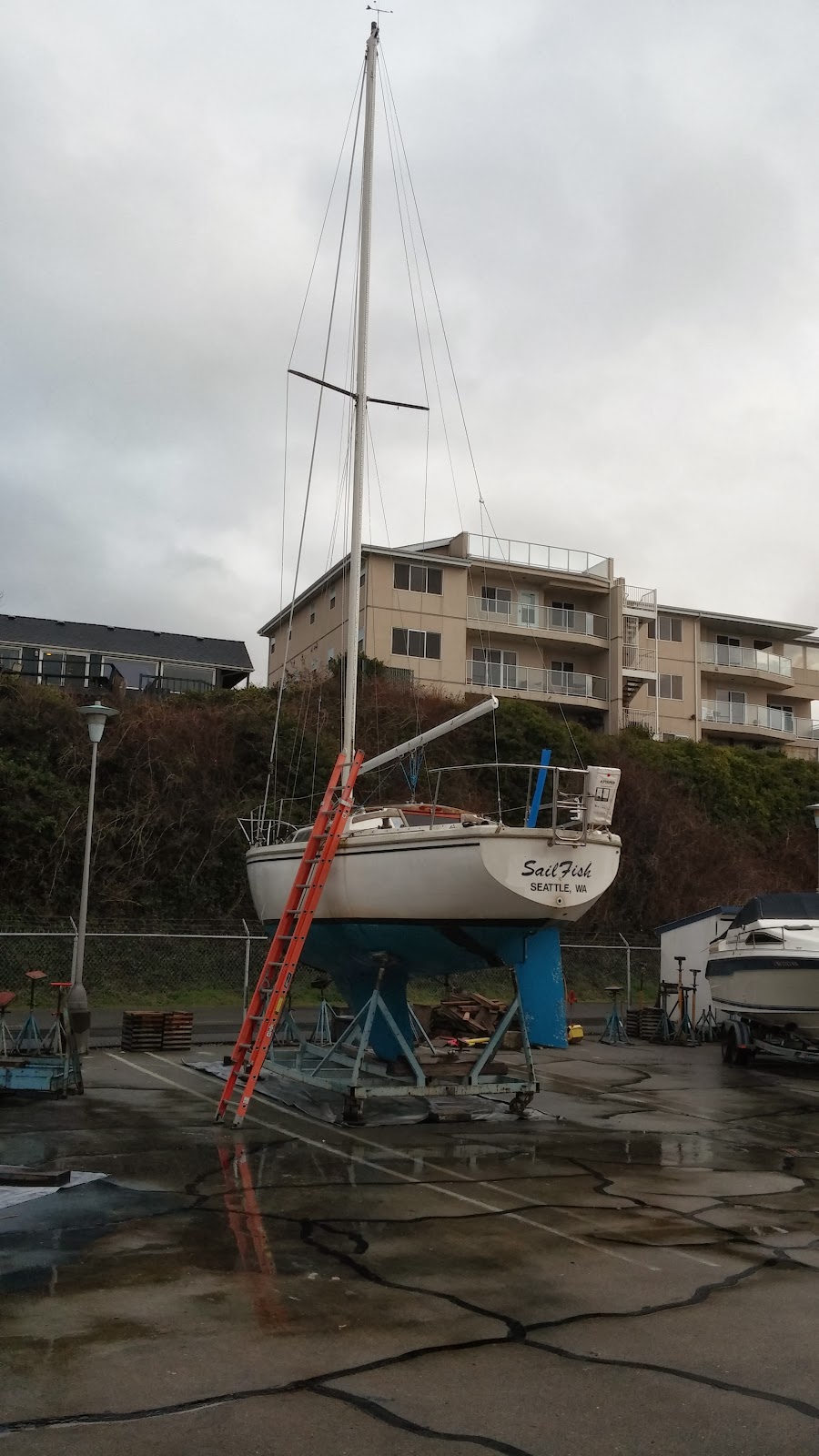 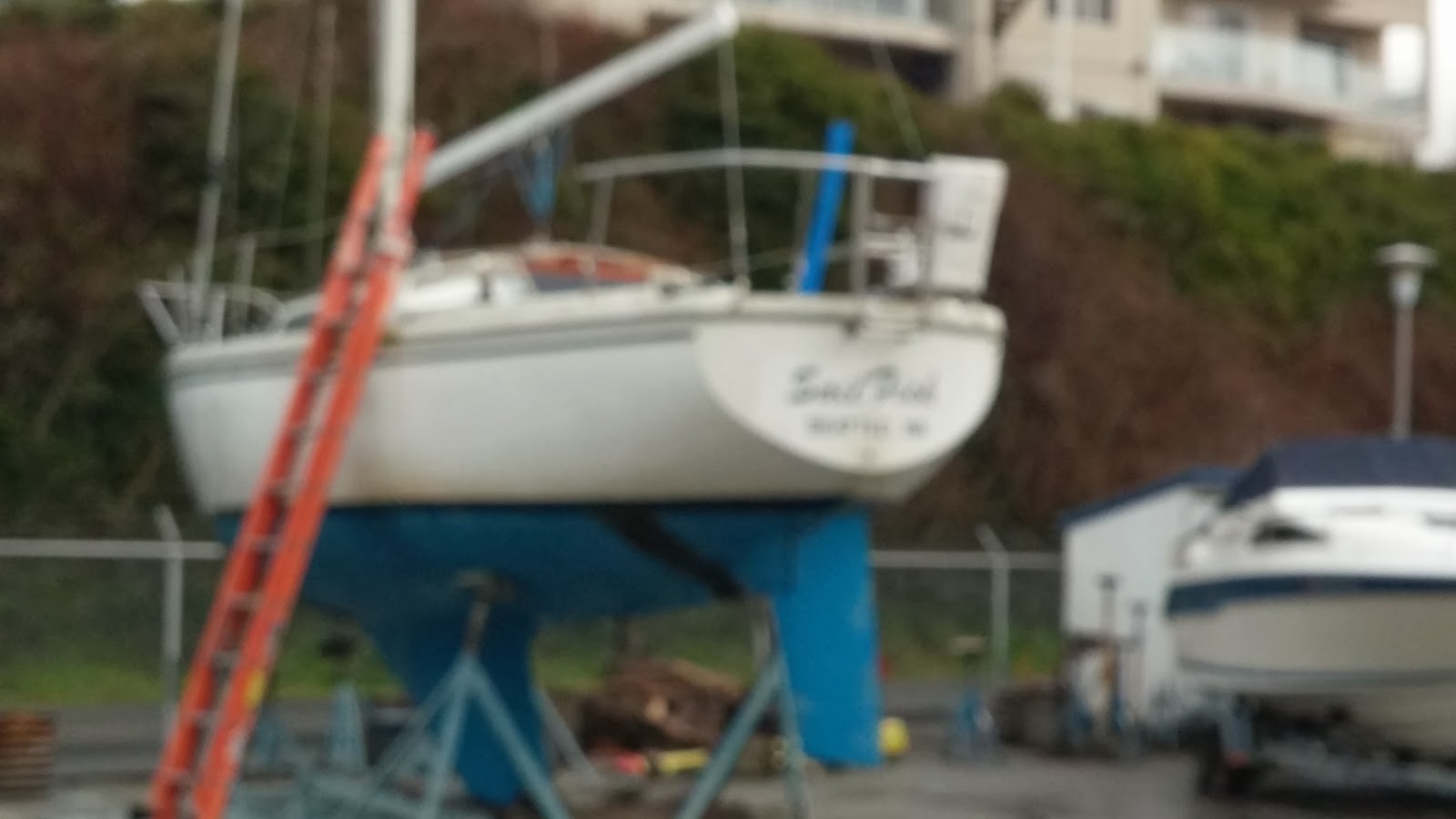 Of course, getting into the boat is a bit more of a challenge as one has to climb about 8-9 feet on a ladder to get into the cockpit, but it was surprisingly stable, and once on board I never gave it another thought.  I pulled out the Knot Meter Transducer, and found out that it wasn't clogged, it was BROKEN... one of the paddle wheels had somehow broken off.  I also found that it is virtually impossible to find a replacement.  It is a Standard Horizon SL50.  I have been told that Standard Horizon got out of the knot meter business many years ago.  As a replacement costs around 300 to 400, I think I will just put this back and deal with it another time....

Stay tuned for more on this subject, and some STARTLING before and after pictures!  As usual, please leave a comment below and let me know what you think, or if you have any advice!