There were a few things I didn't like about the Navigation Station..    First, the angled desktop kept everything on it sliding down, and sometimes to the floor. 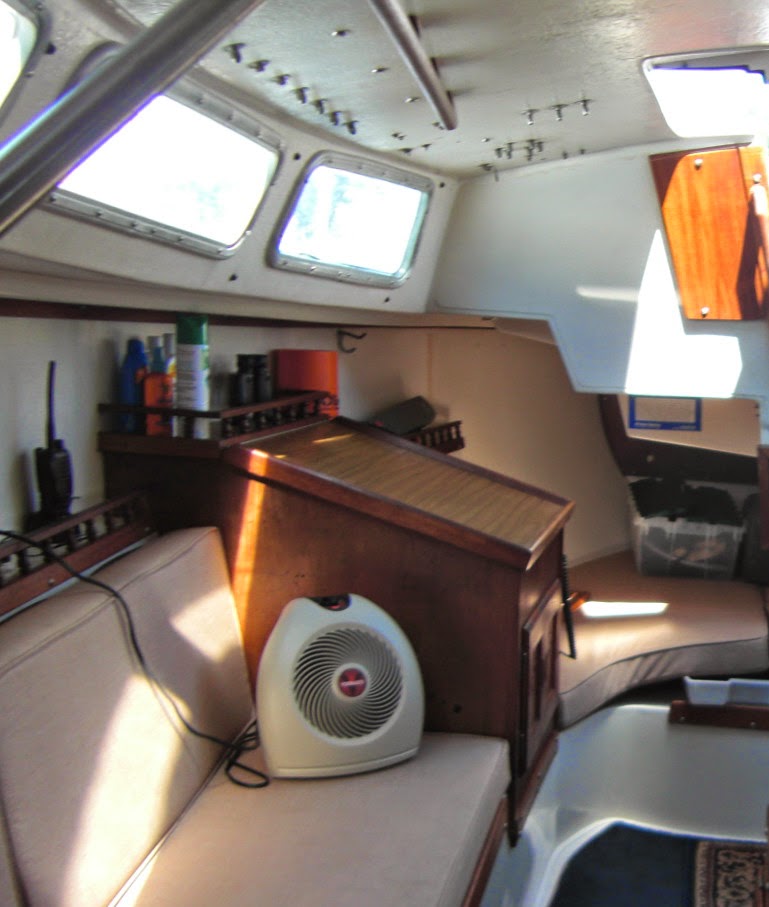 there was also no place to mount the VHF radio except to the aft side, vertically.


Also, I want to eventually move all of the electrical panels to the Navigation Station, a more logical and safer location in my opinion, than the current location on the aft bulk head, where the backs of the panels are exposed to the Lazerette, albeit under the line locker, but I think it is possible that things could shift in there and come in contact with the panels, possibly shorting things out, or worse.  currently there is no place to put the panels at the nav station.

Sooooooo, A redesign of the station is in order.  First step. some boat Yoga to yank it out!


When I dismantled the station, I discovered that the shelf that separates the top and bottom compartments was made out of Teak ply!  Bonus!  I will need this later to extend the vertical "Ears" to the bottom the deck! So I replaced this with a piece of Exterior Plywood. 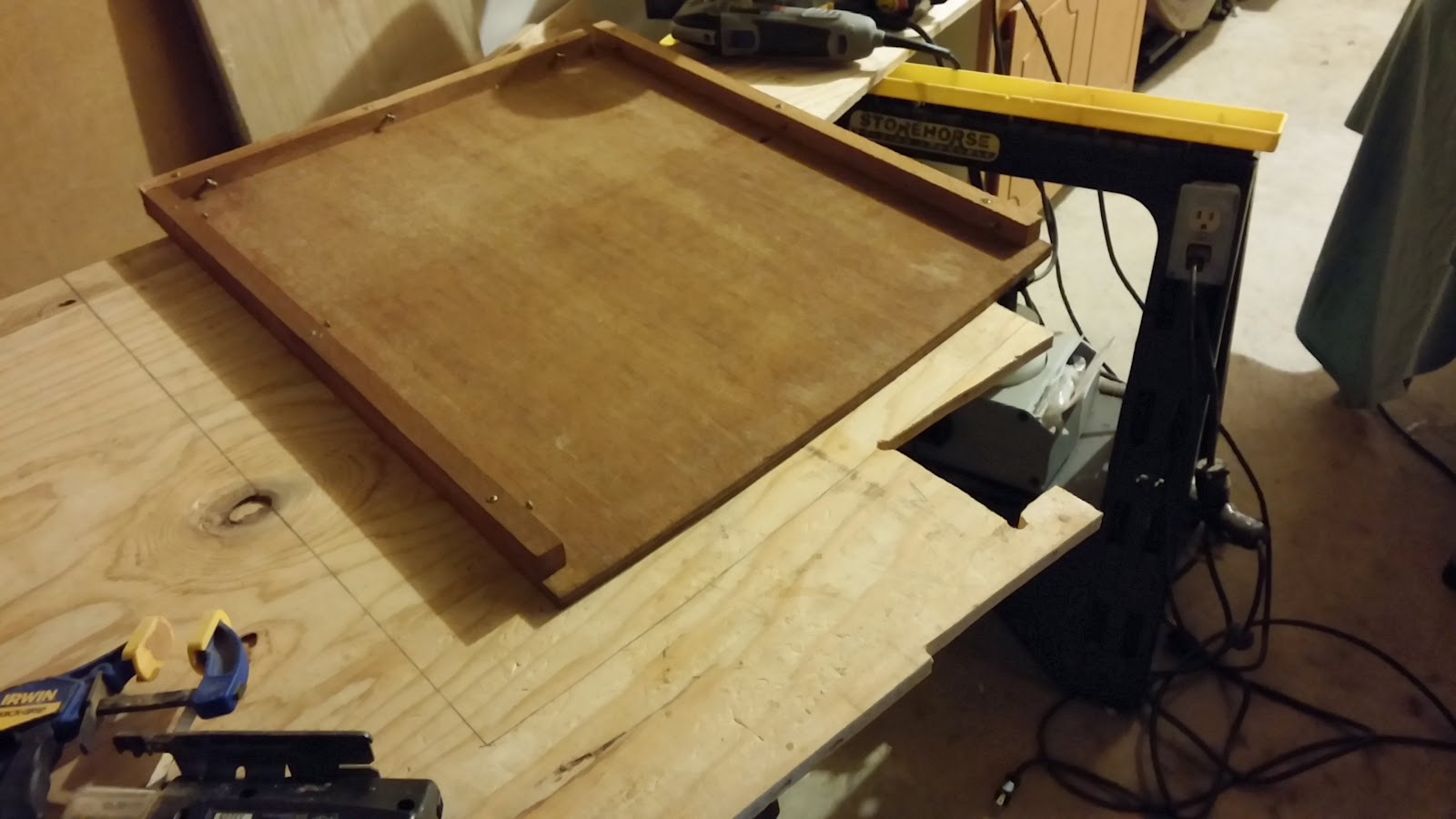 Next, in my original design, I need to cut a Isosceles triangle out of the sides, but they had to be identical on each side... hmmm... ah!  I stacked them (flush in the front), and then clamped them together.  I will cut both sides at the same time! (Note I say the ORIGINAL design.... keep this in mind....) 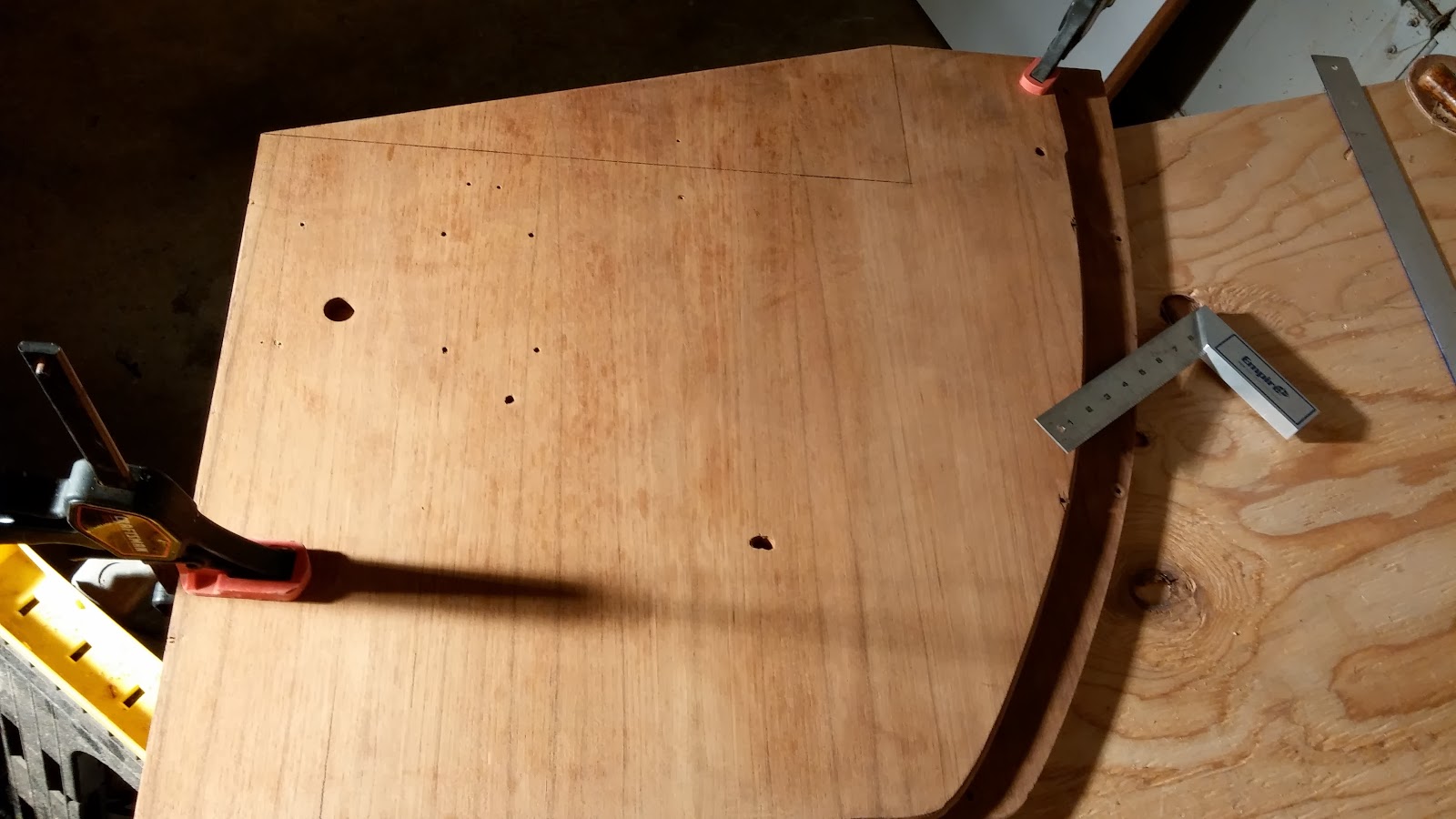 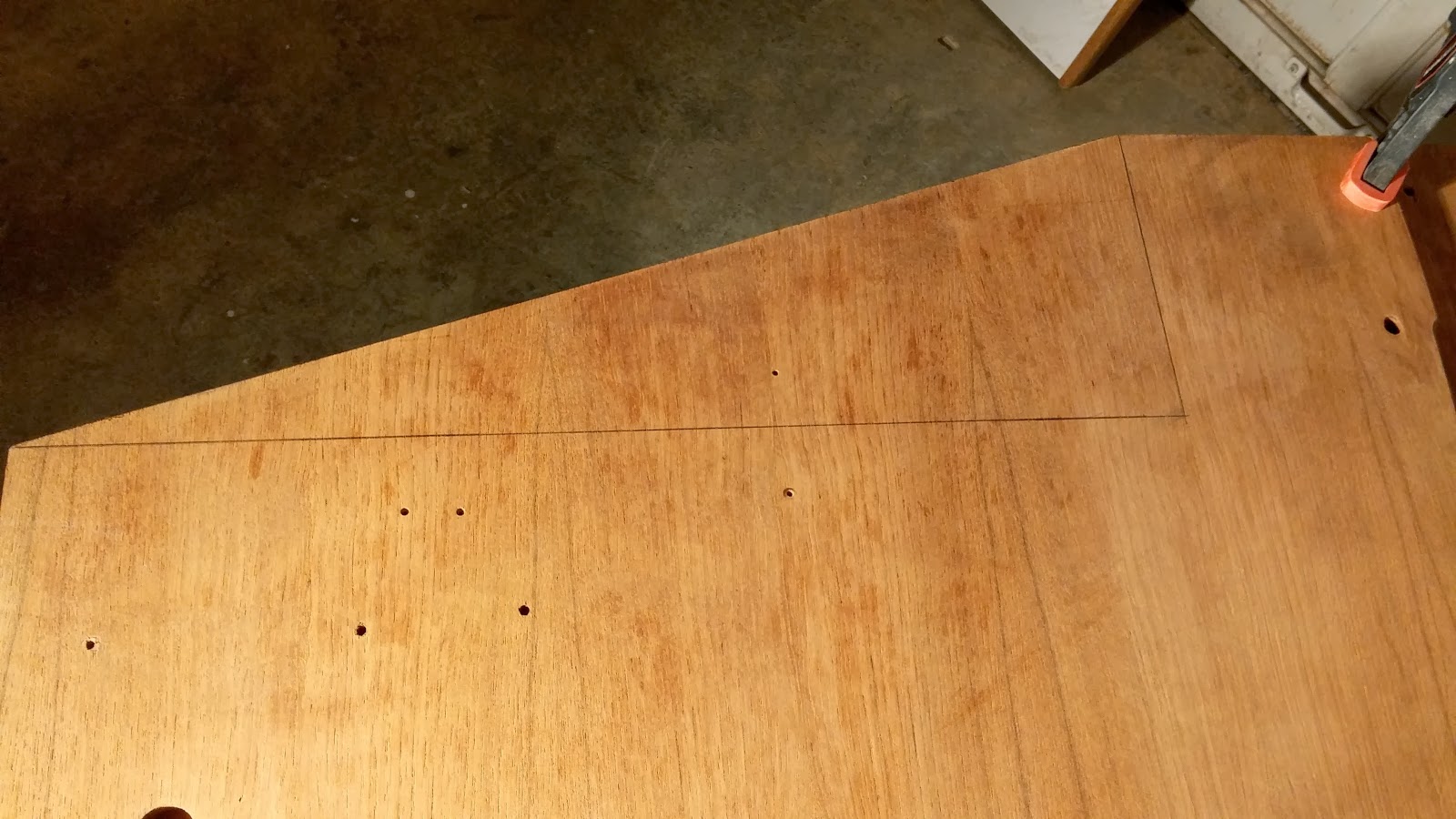 Cut along the line with my trusty Jig saw.... 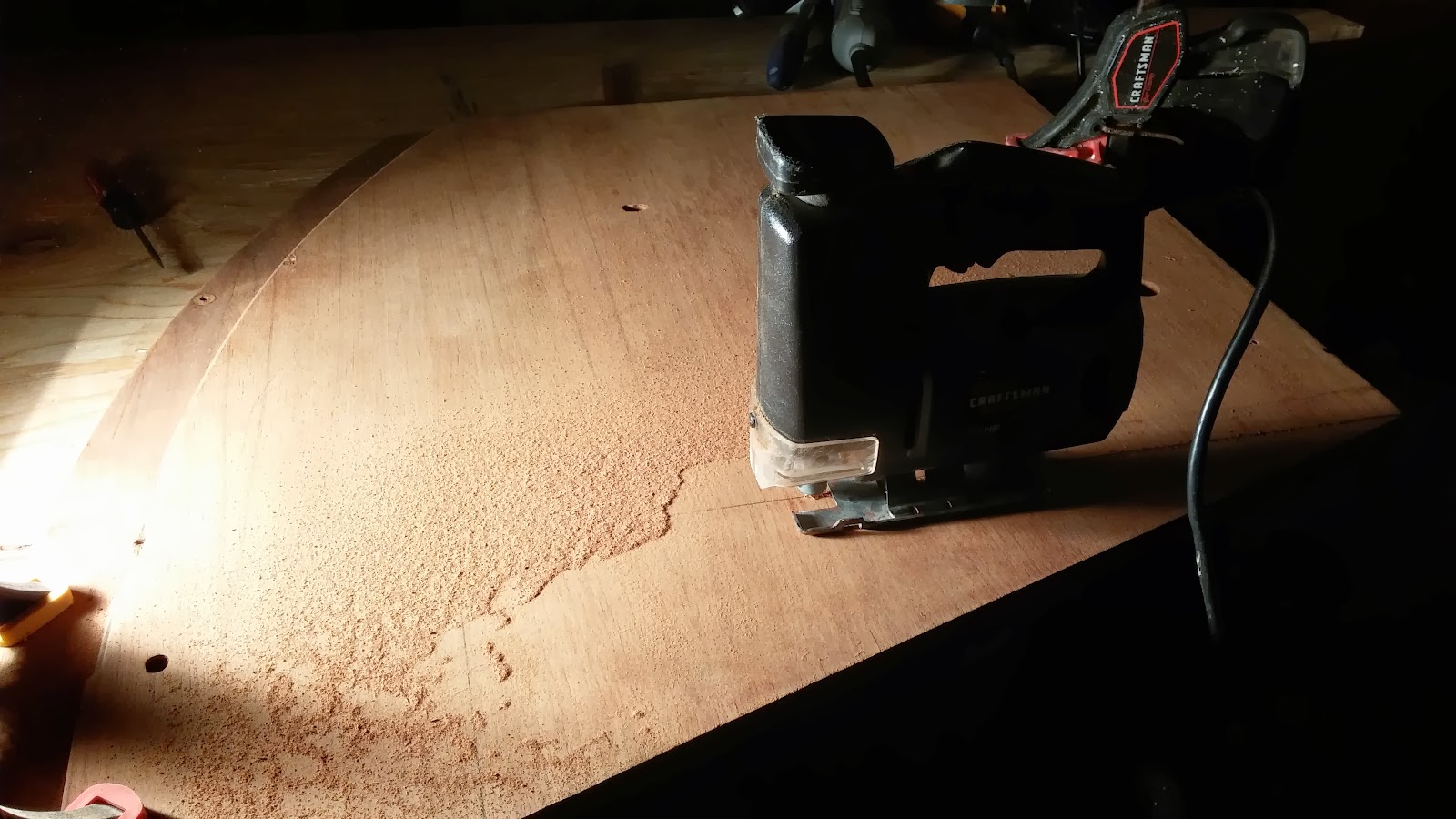 here is a little trick when cutting out pieces like this... cut the first side, then put a clamp on top of that first cut, then cut out the second side.... this keeps the piece from flopping and binding the blade, not to mention from dropping to the floor after cutting the second side. 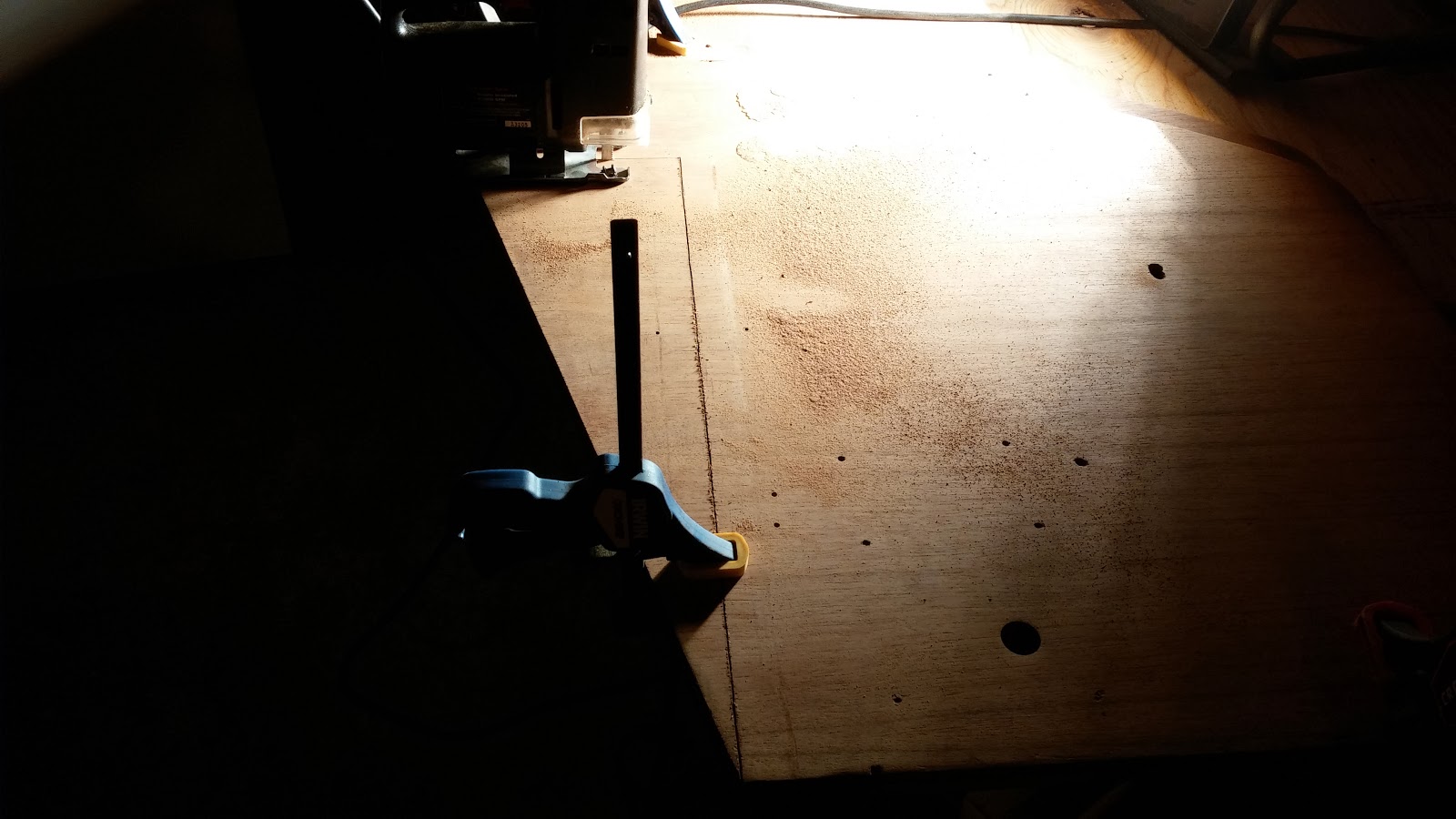 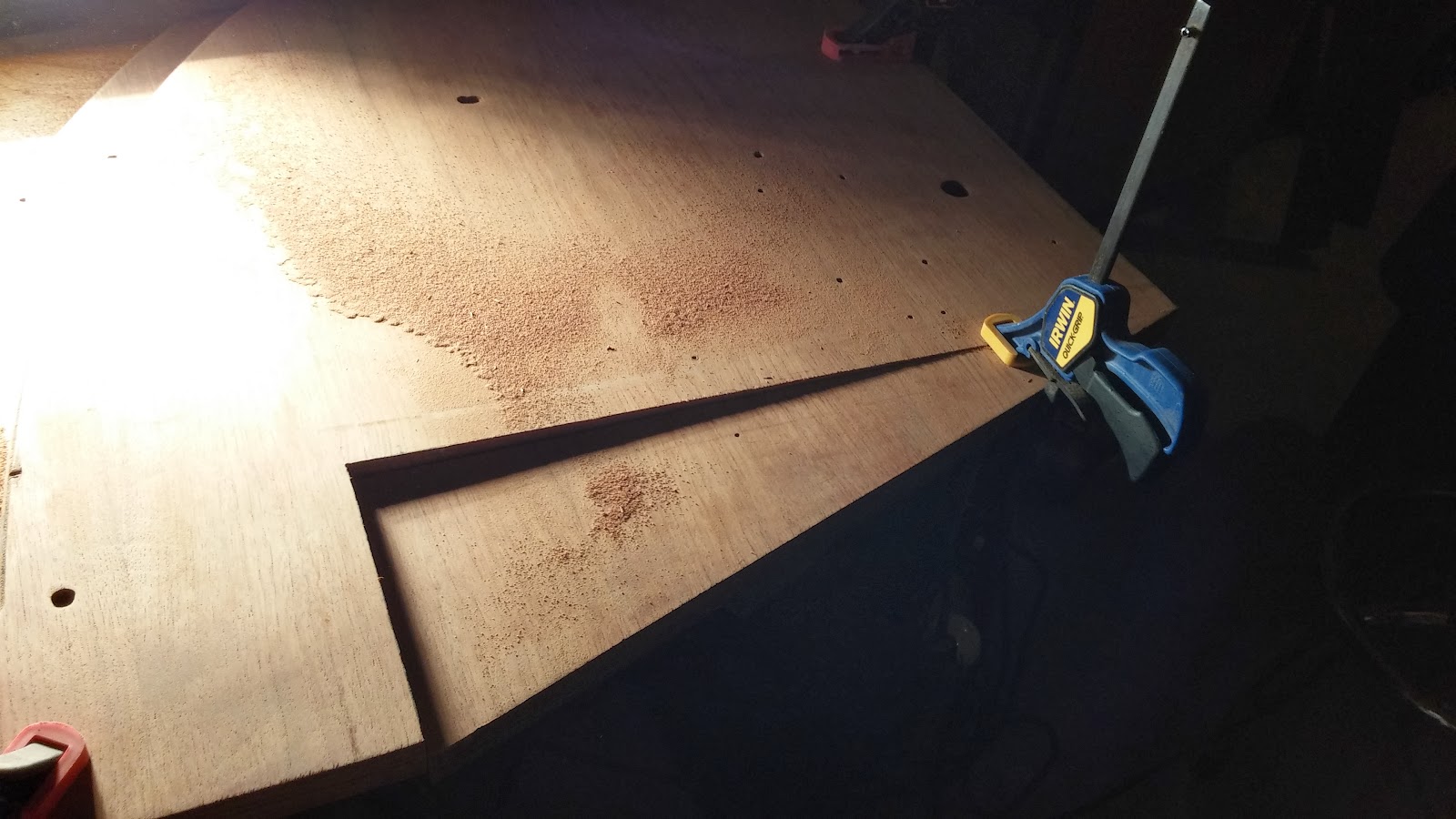 I was so happy with the way it turned out that rather than taking it back to the boat for a dry fit, I just sanded, patched, reassembled and refinished it!  This was gonna be GREAT!  I didn't even have to modify the desk top.... I thought I was going to have to cut some of it off!  (ominous music plays here)


So, being the happy camper I was, I put 6 coats of Varnish on the whole thing! 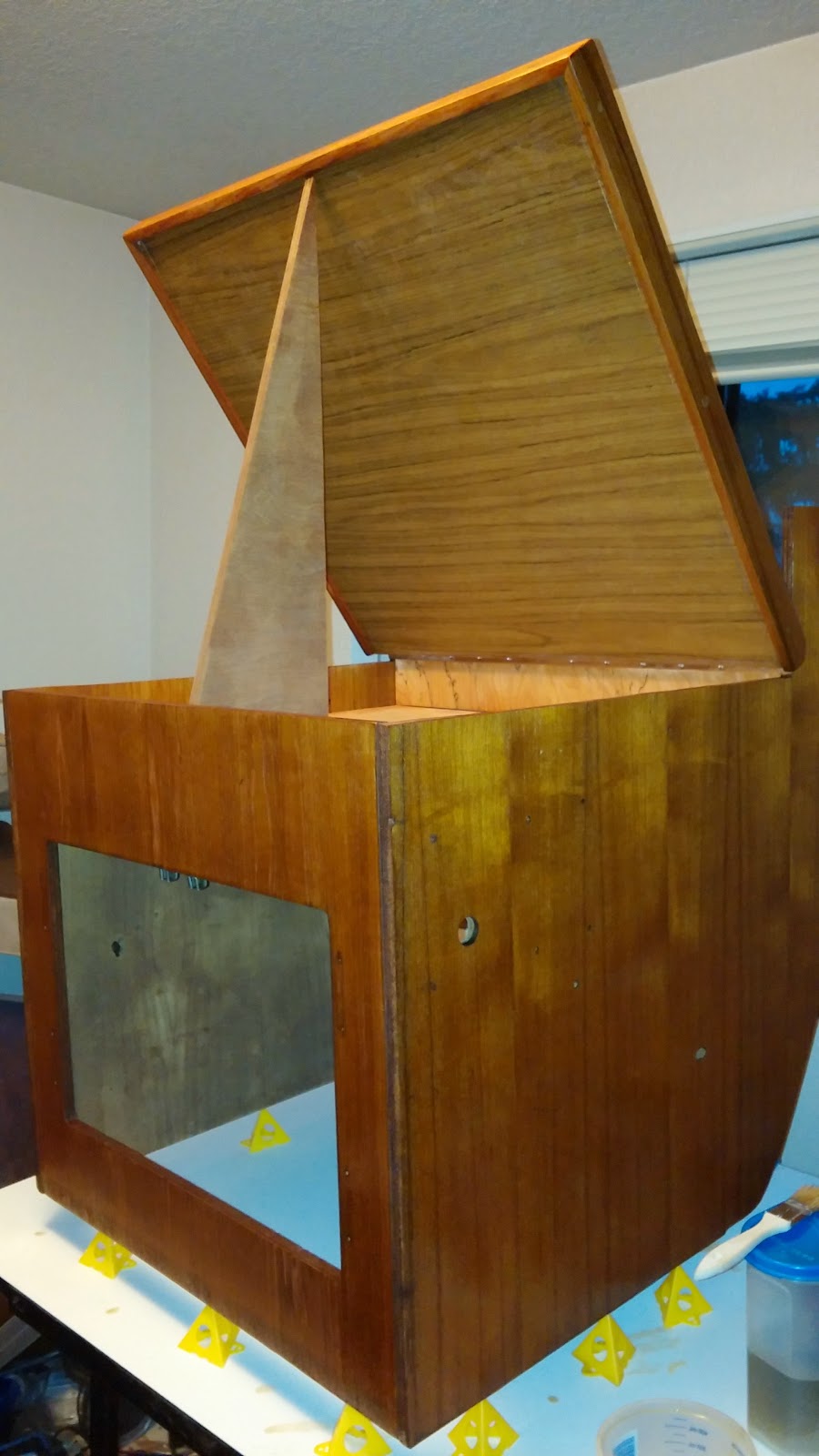 By the way, I agree with my friend Robert Salnick at WindBorne in Puget Sound on the subject of Painter's Points.... Get 'em and use 'em! 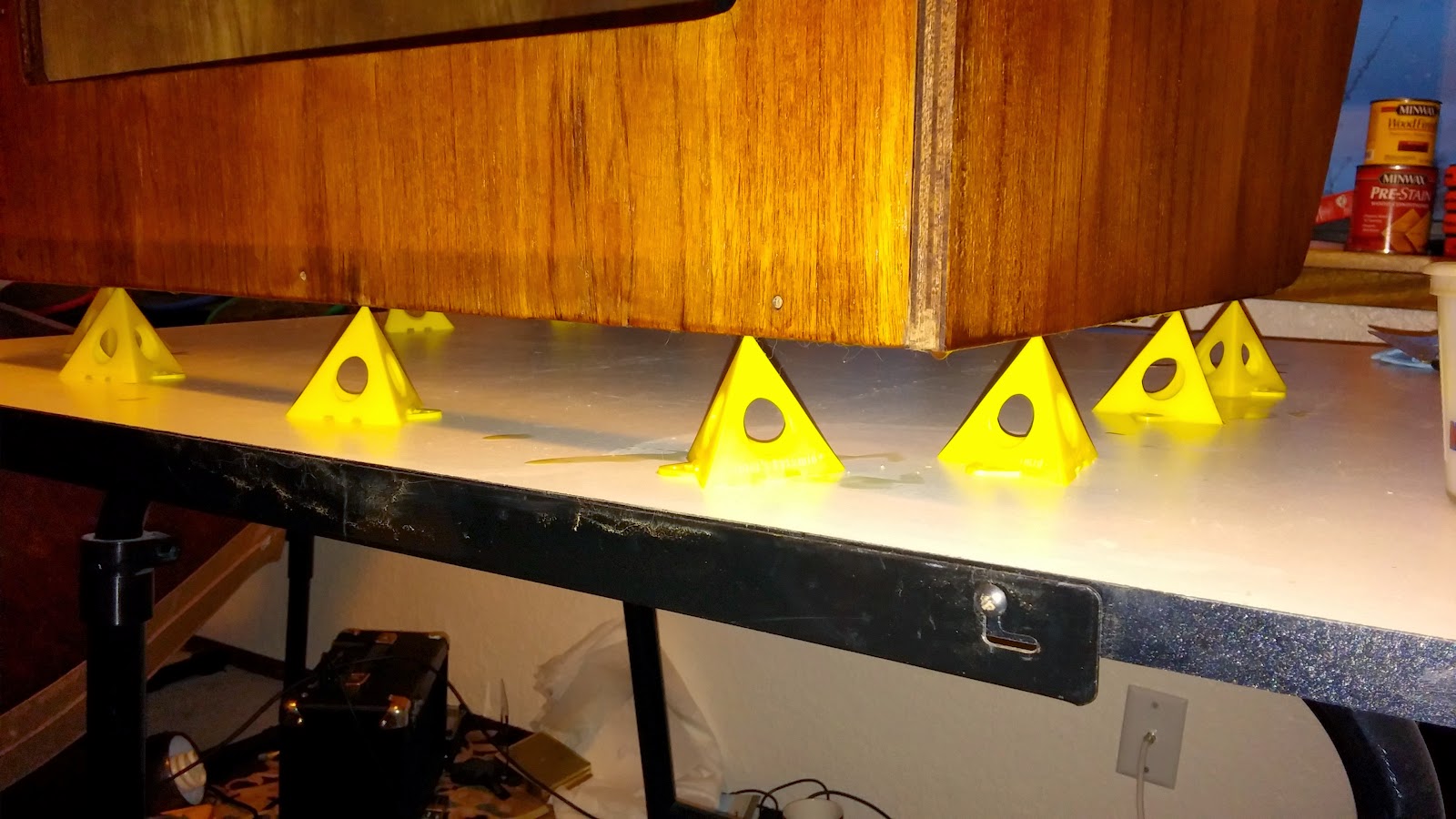 Then it was time to install it in the boat!! THIS is when I found out the FLAW in my design.... you see,  I didn't account for the shelf on the right side of the Nav station.... see the fiddle on the desktop below?  it is supposed to be an inch or so to the right, overhanging the edge of the nav station.....


Soooooo..... time for a redesign of the redesign.  The first step was to remove the "ears" that weren't wide enough....

﻿
Then I added a shelf to separate it into two sections, and to add some stability.  I mounted blocks so I could attach the face plate.  And what is that thing in the middle?  Stay tuned!

﻿
Now to address that weird black spray painted thing in the middle.... Notice the location, just under the stereo.  You see, my stereo connects via blue-tooth to my phone or Ipod, but I needed a place to put these when underway.  So I made this little cubby hole.  Put a little bit of anti-slip material in the bottom and Voila!  It also is a great place to put pencils and pens too!

﻿
﻿
Now to take the newly fabricated top to the boat!  This time I measured Many times, so all pretty much fit like a glove. 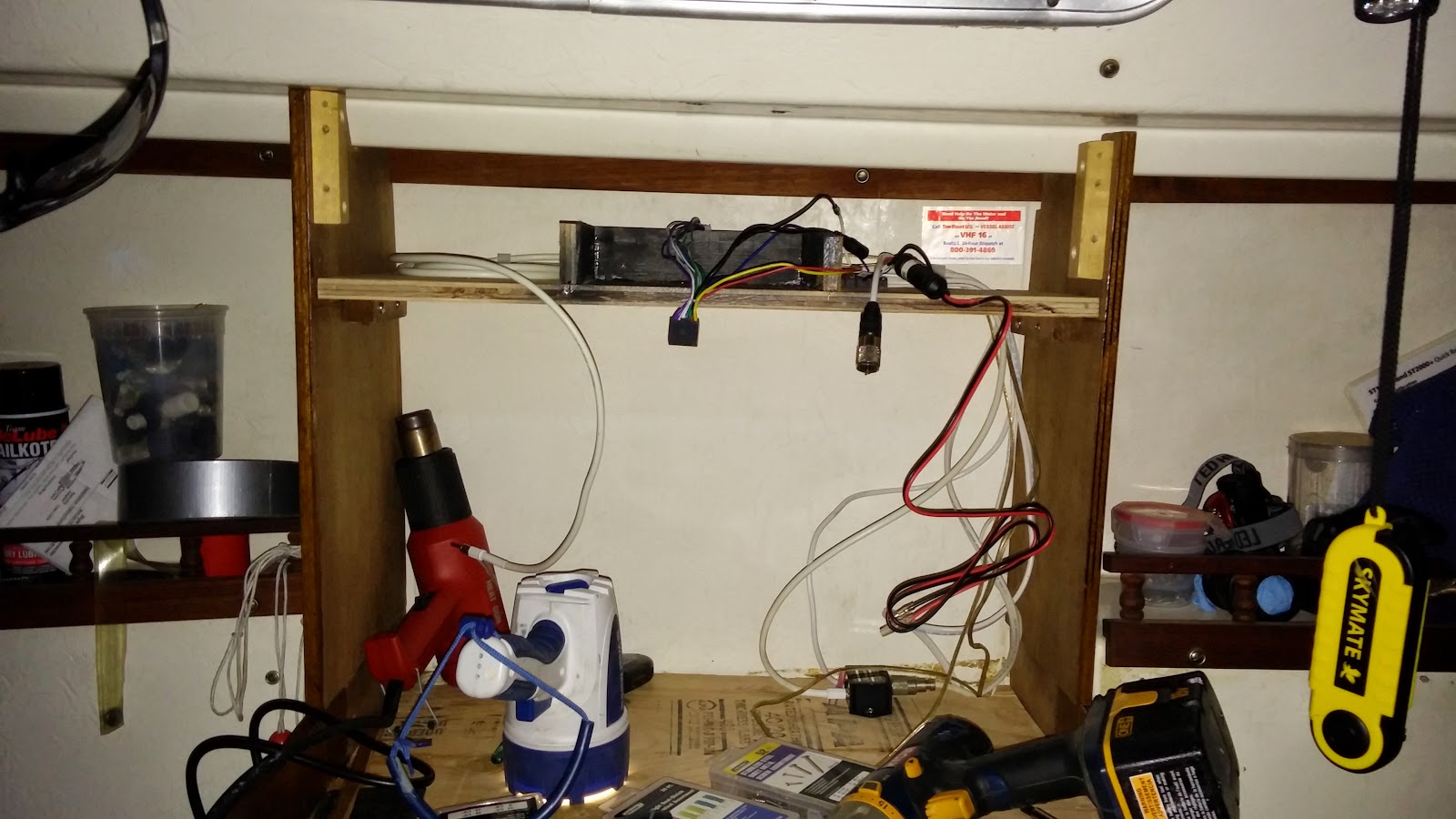 I needed a way to connect the upper and lower parts of the nav station, and not wanting to waste anything, I figured this was a good place to use the old ears! 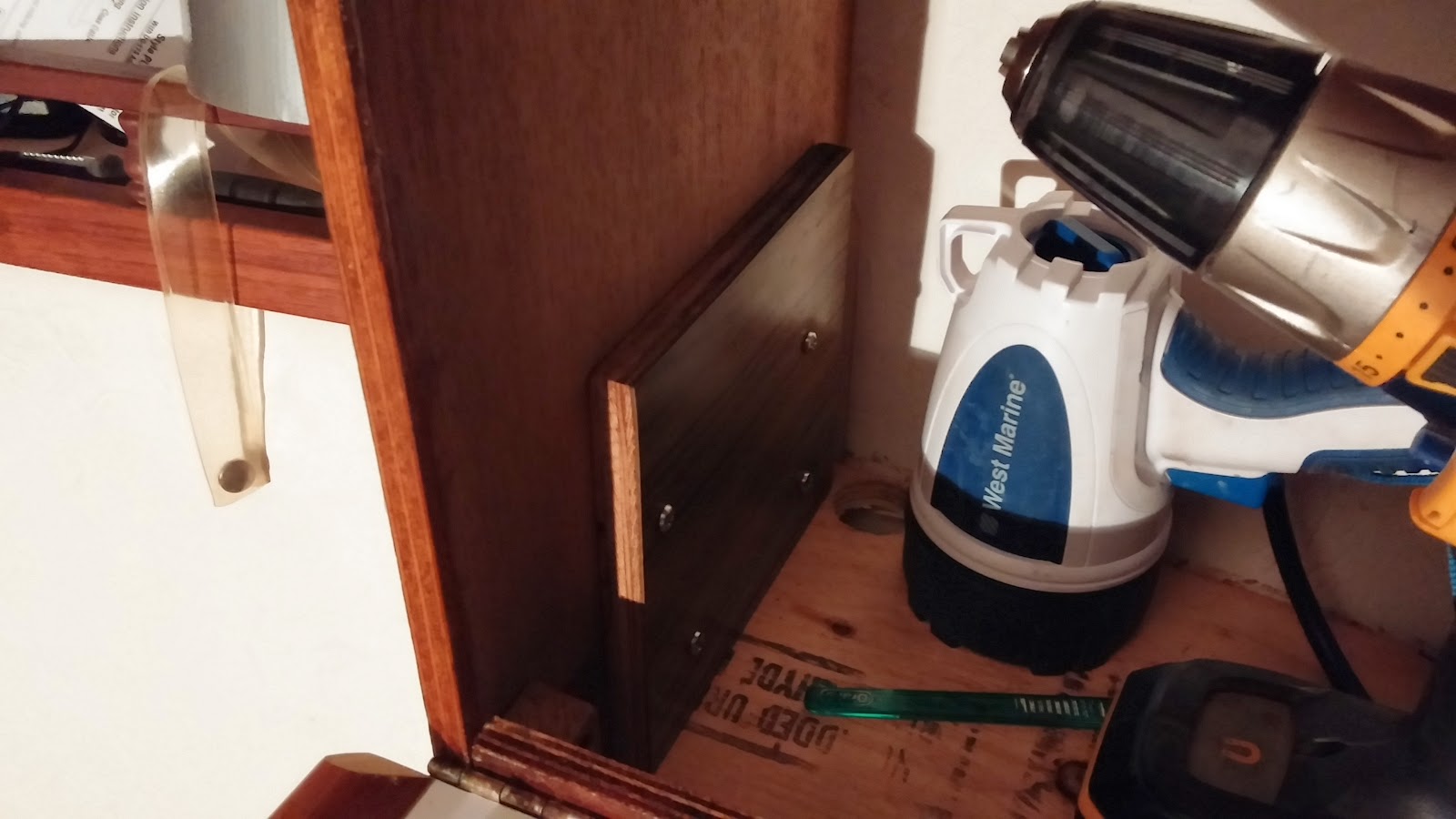 ﻿
Darn it!  I guess I am going to somehow modify the desktop..... It sticks out WAY too far.... More measurements, and take the desktop back home... 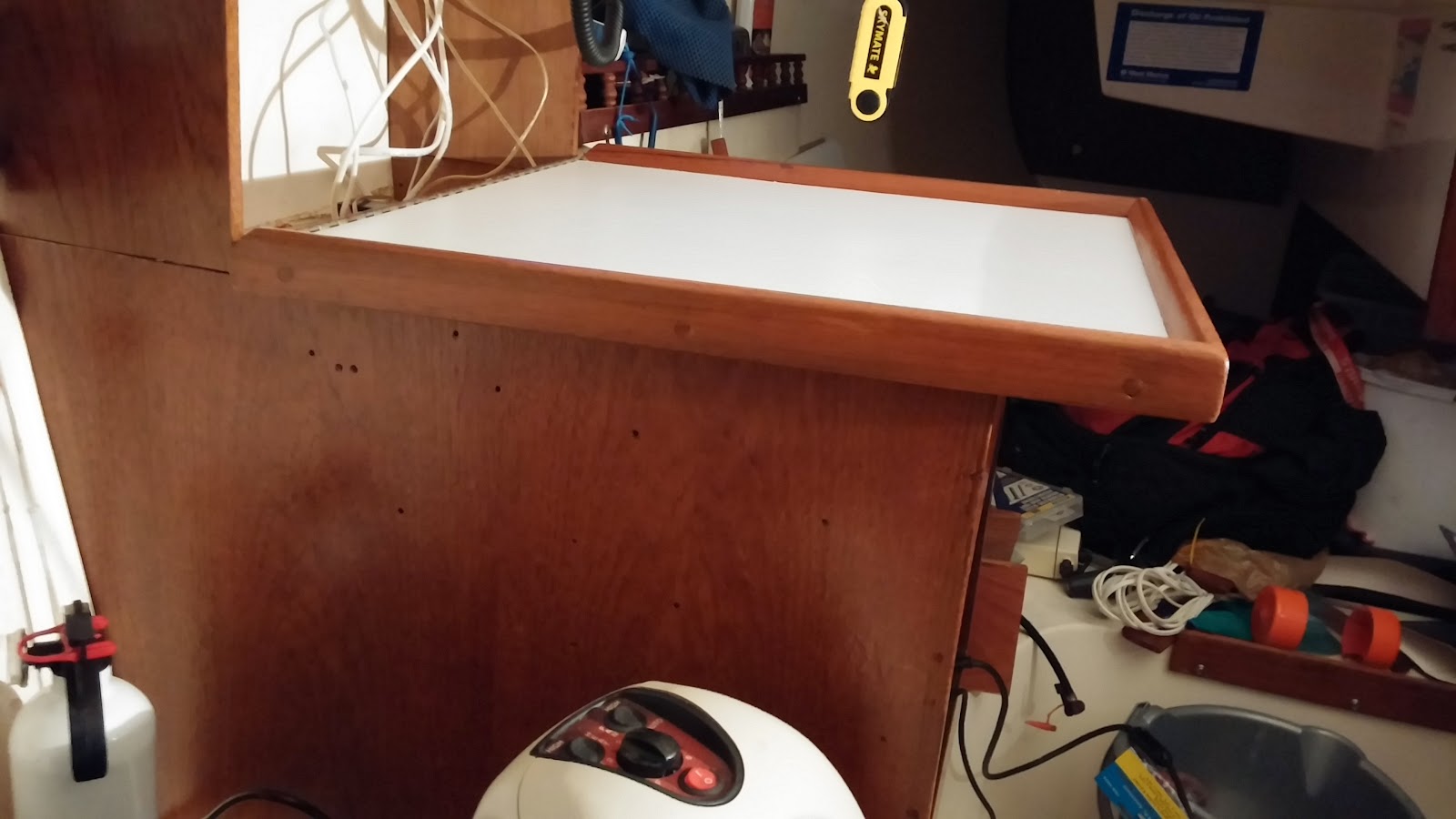 Now I wanted to cut this desk top down, but I did NOT want to remove the fiddle rail, and I didn't want to chip the Formica top.  So, I used some tricks I learned when renovating  houses I have owned in the past...

First step is to put down painters tape so the cut line is in the middle of the tape. 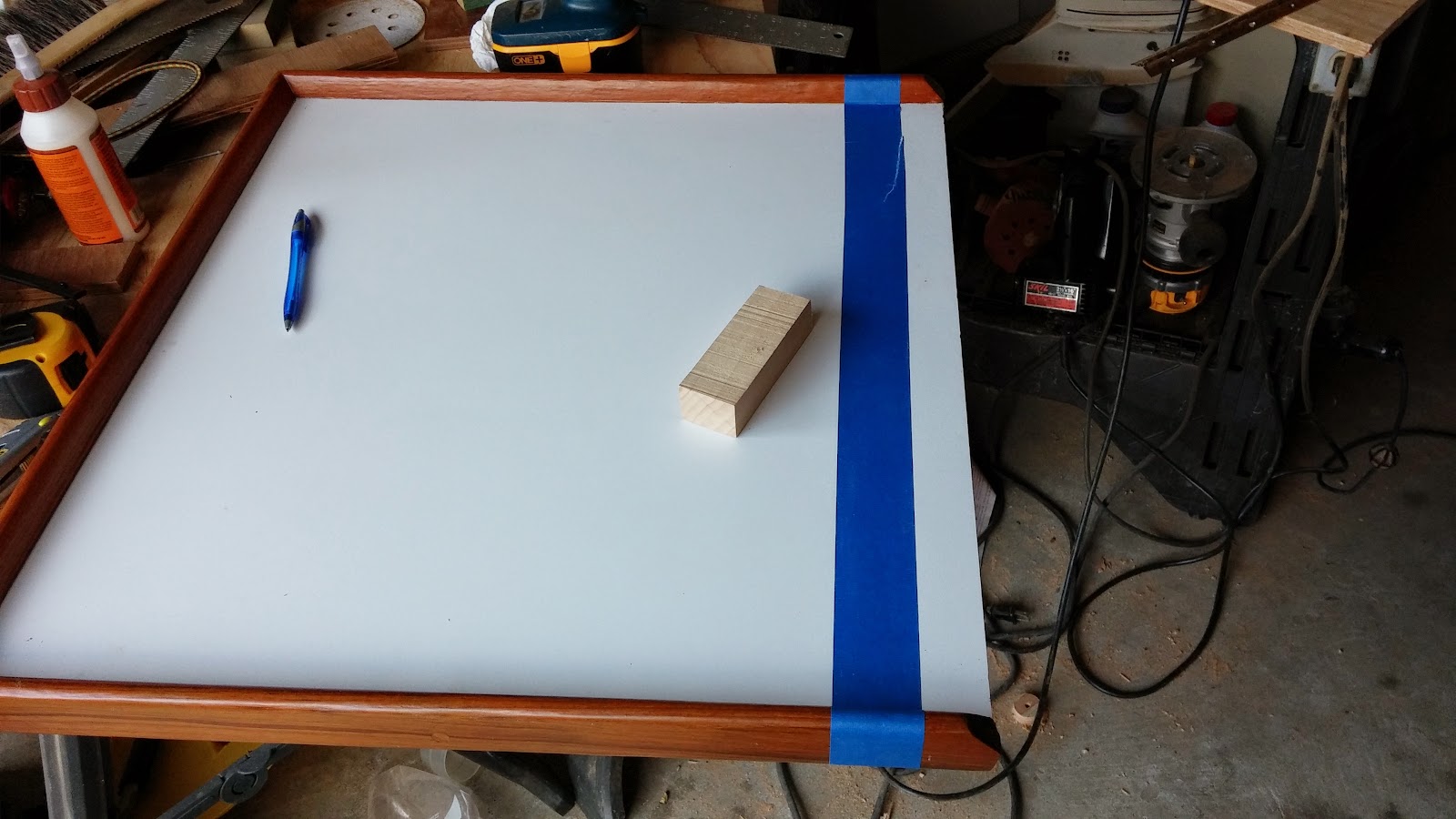 Now, Normally you want to cut the counter top with the Formica side down, to virtually eliminate the chipping that will happen when it is cut.  I could not do that in this case because of the Fiddle rails, so I had to cut it the other way..... MAKE SURE you use a Plywood blade on your saw (many 32 teeth per inch or better) AND have the blade just BARELY CLEAR the top.  Then go SLOWLY.

Since the blade didn't cut through the Fiddle rails, I finished it off with a hand saw... 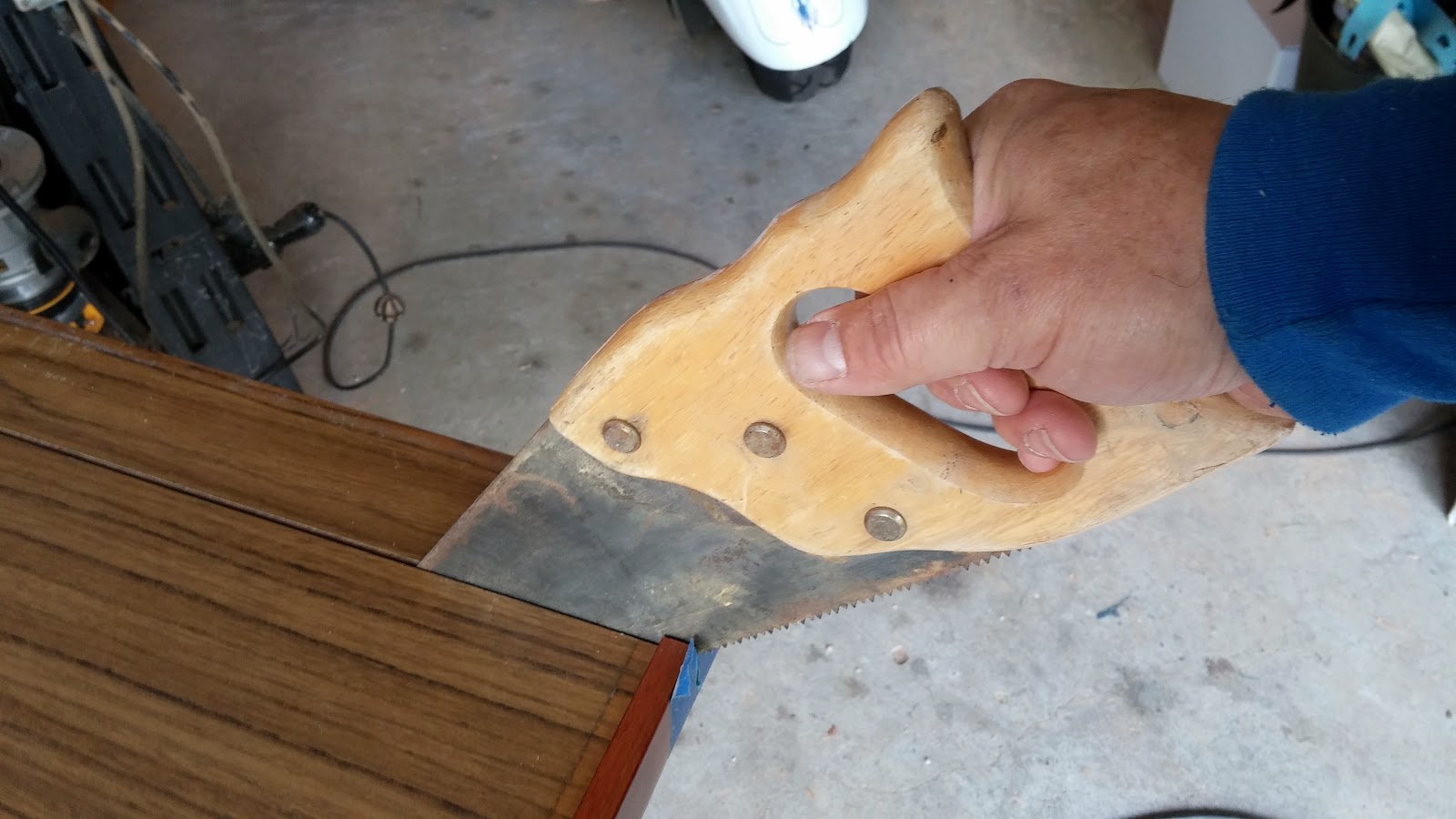 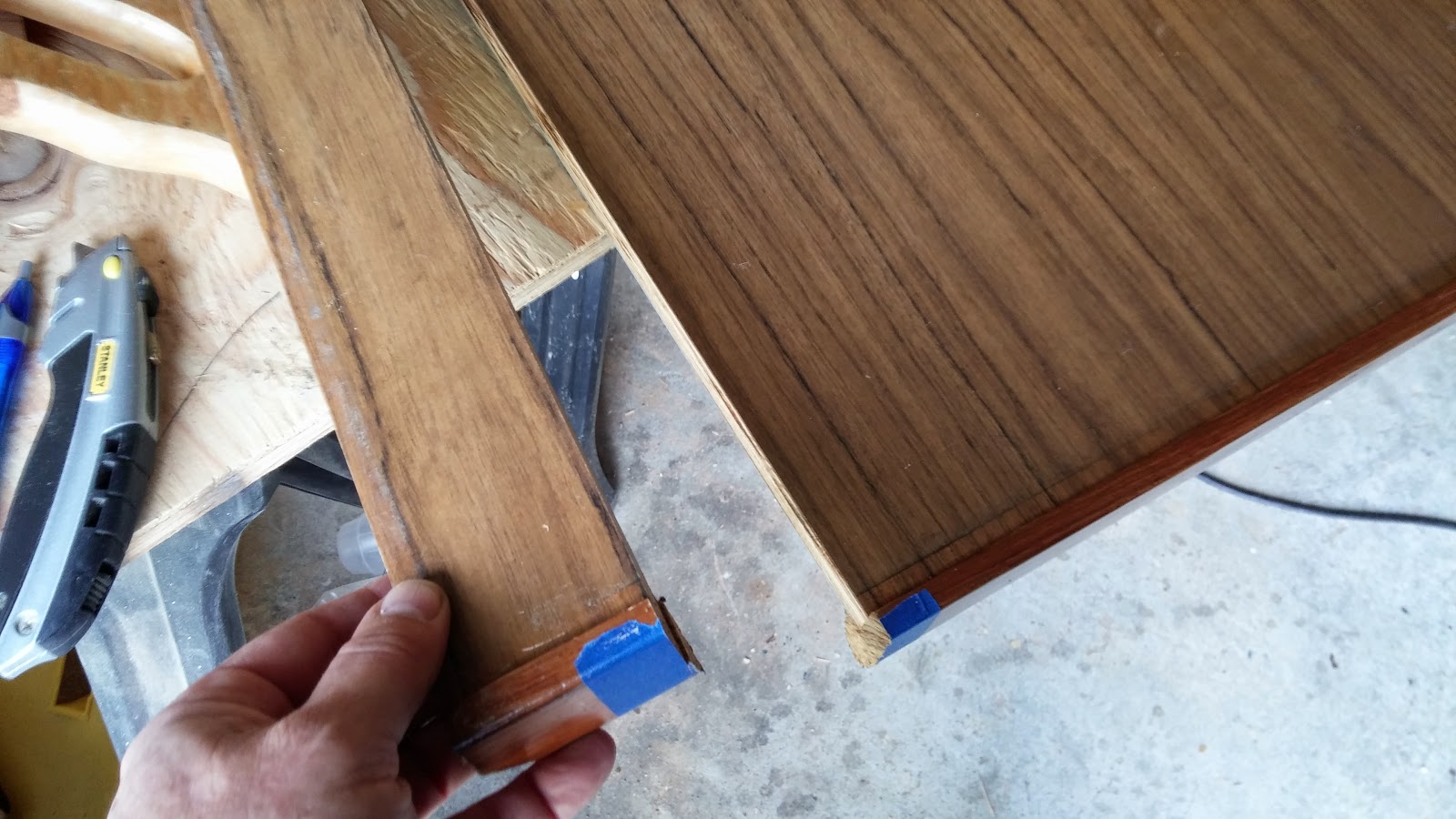 Then it was time to hold my breath and remove the tape, to see how badly it chipped...... 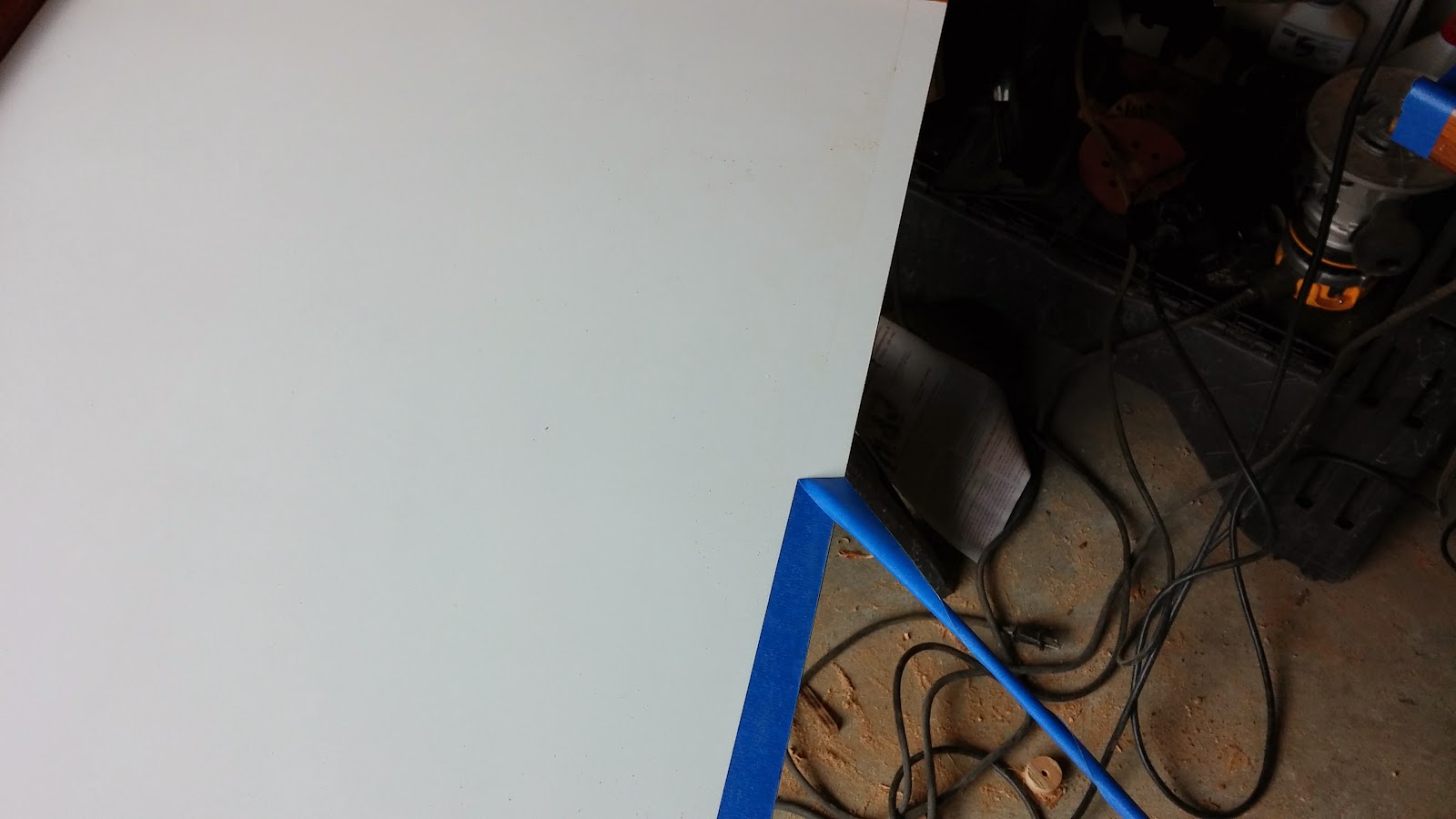 And, amazingly, not one single chip!  Nice! 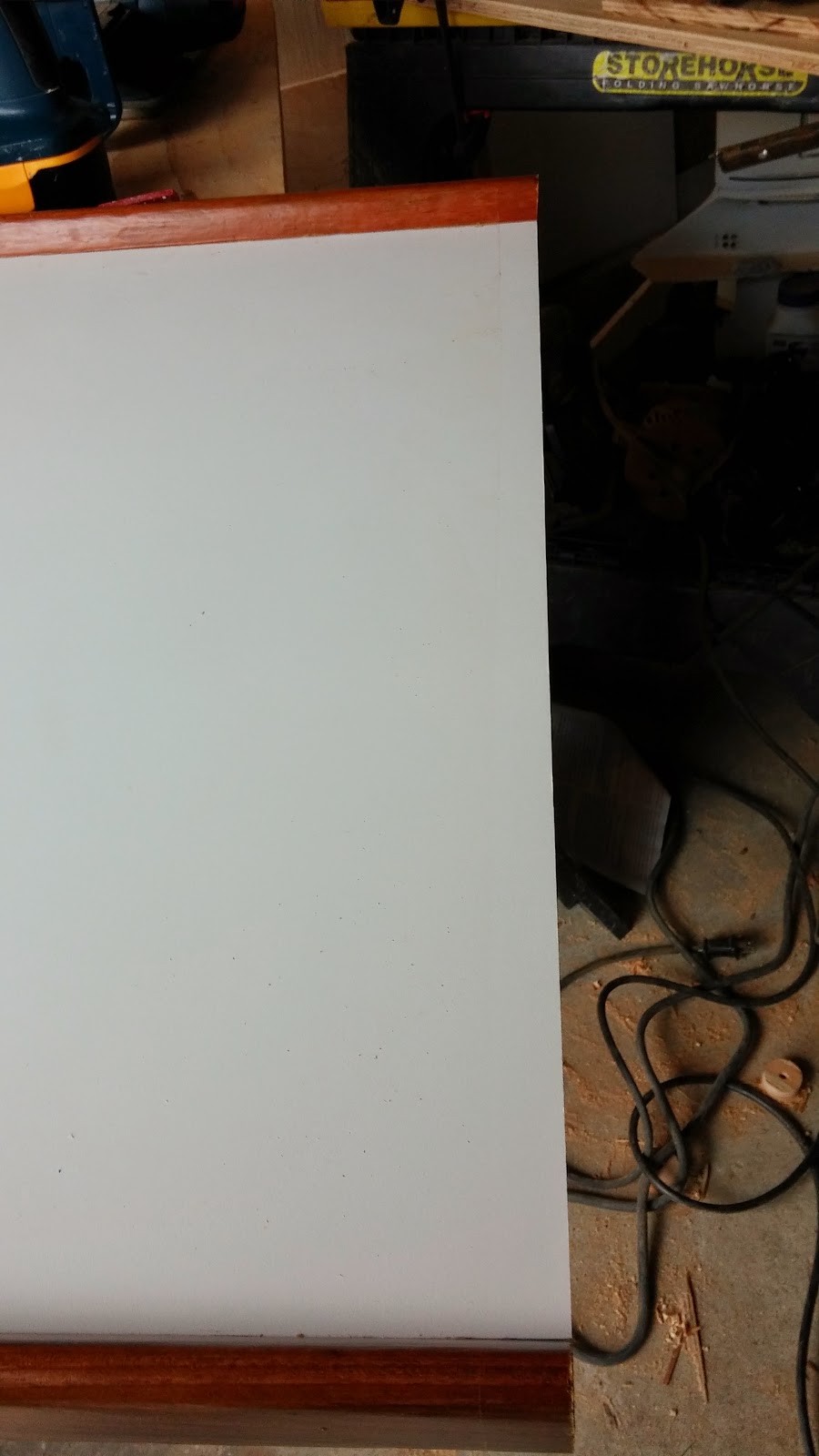 Finally I had to ease off the top corners so the desktop will open without binding.  I used my trusty belt-sander for this.  It made quick work of it! 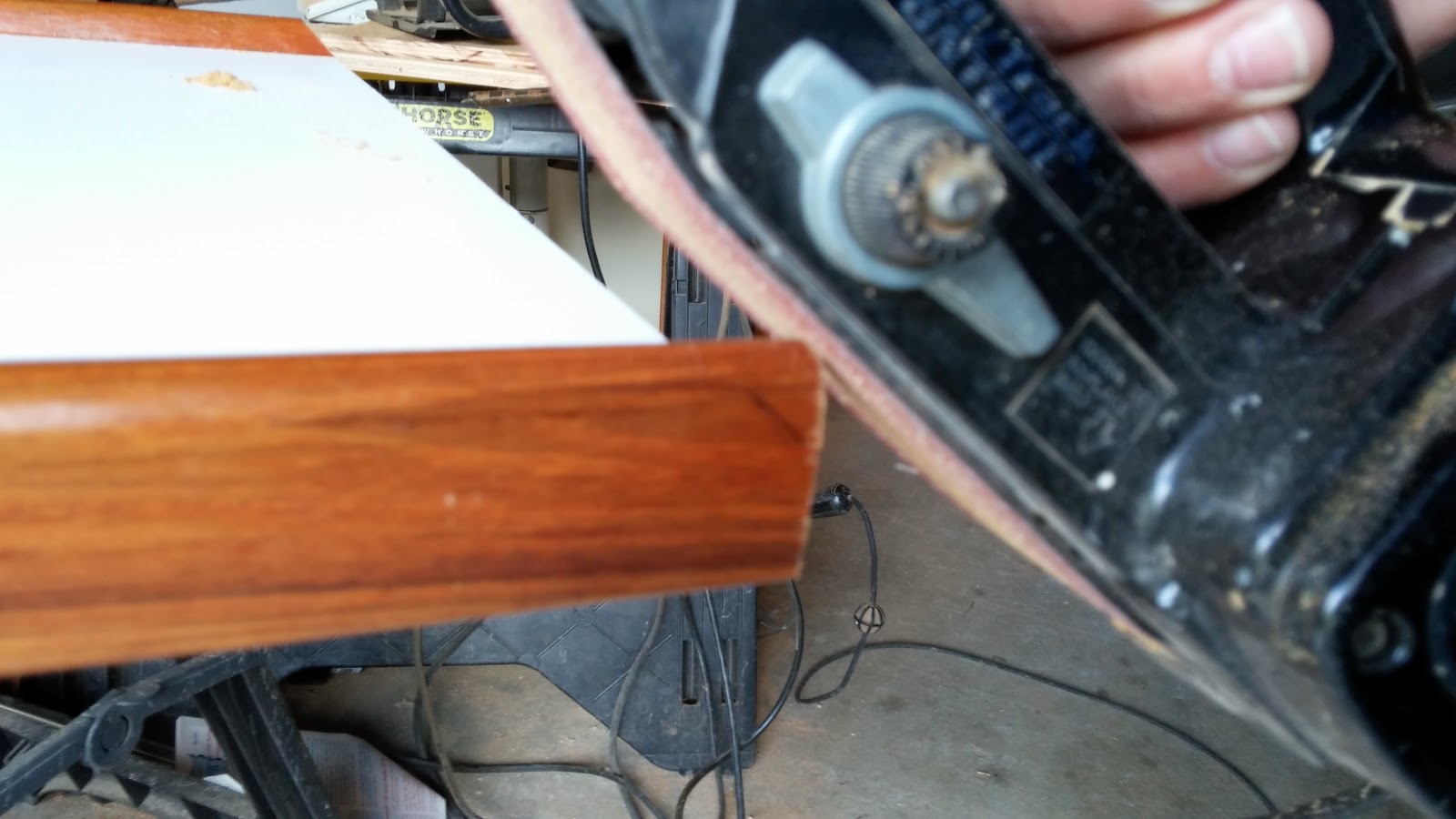 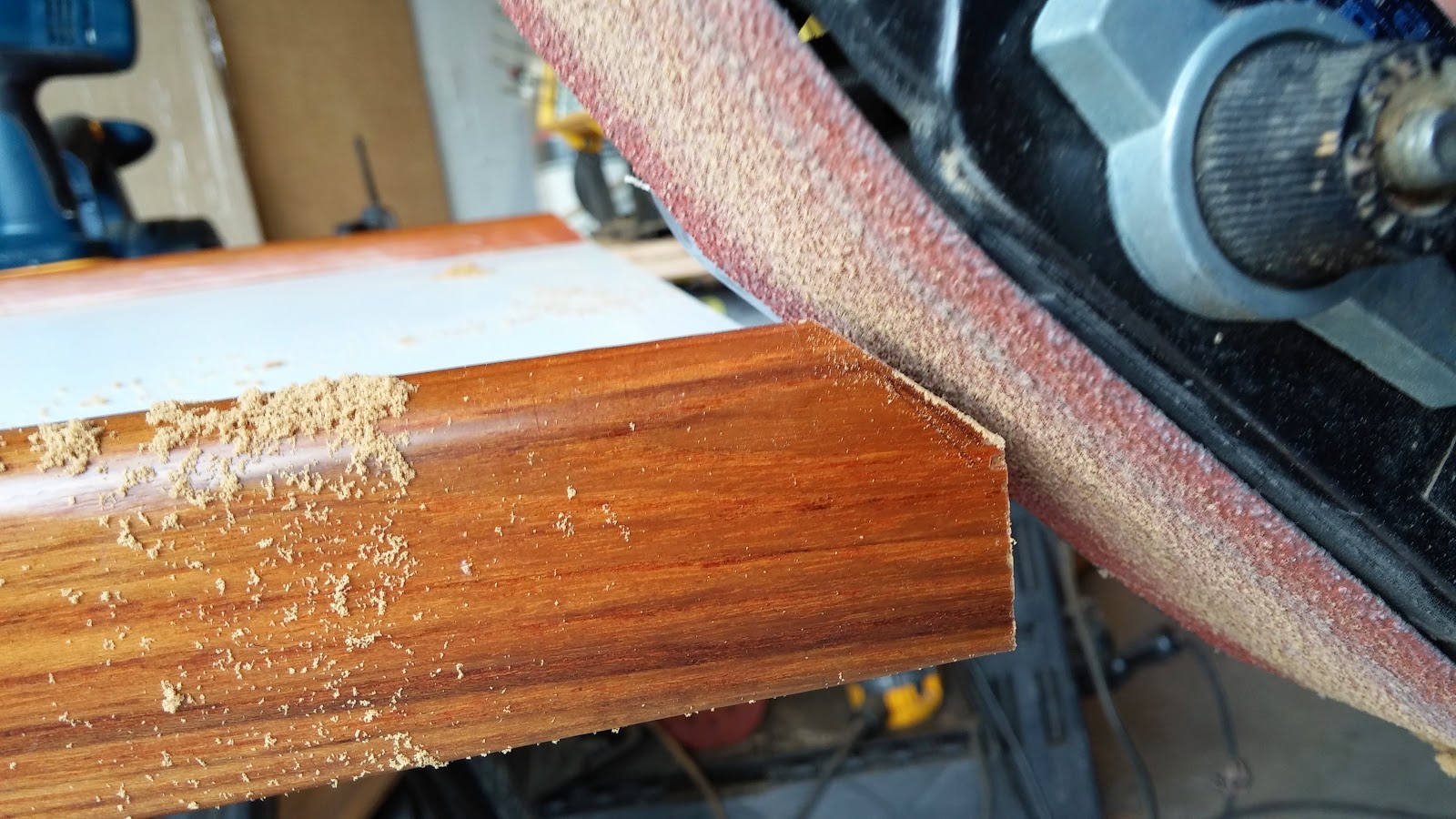 and now I have a finished desk top..... back to the boat for the third time!!!!! while I was doing all this, I also made a door for the top part of the Nav Station, so now it was time to install them both! 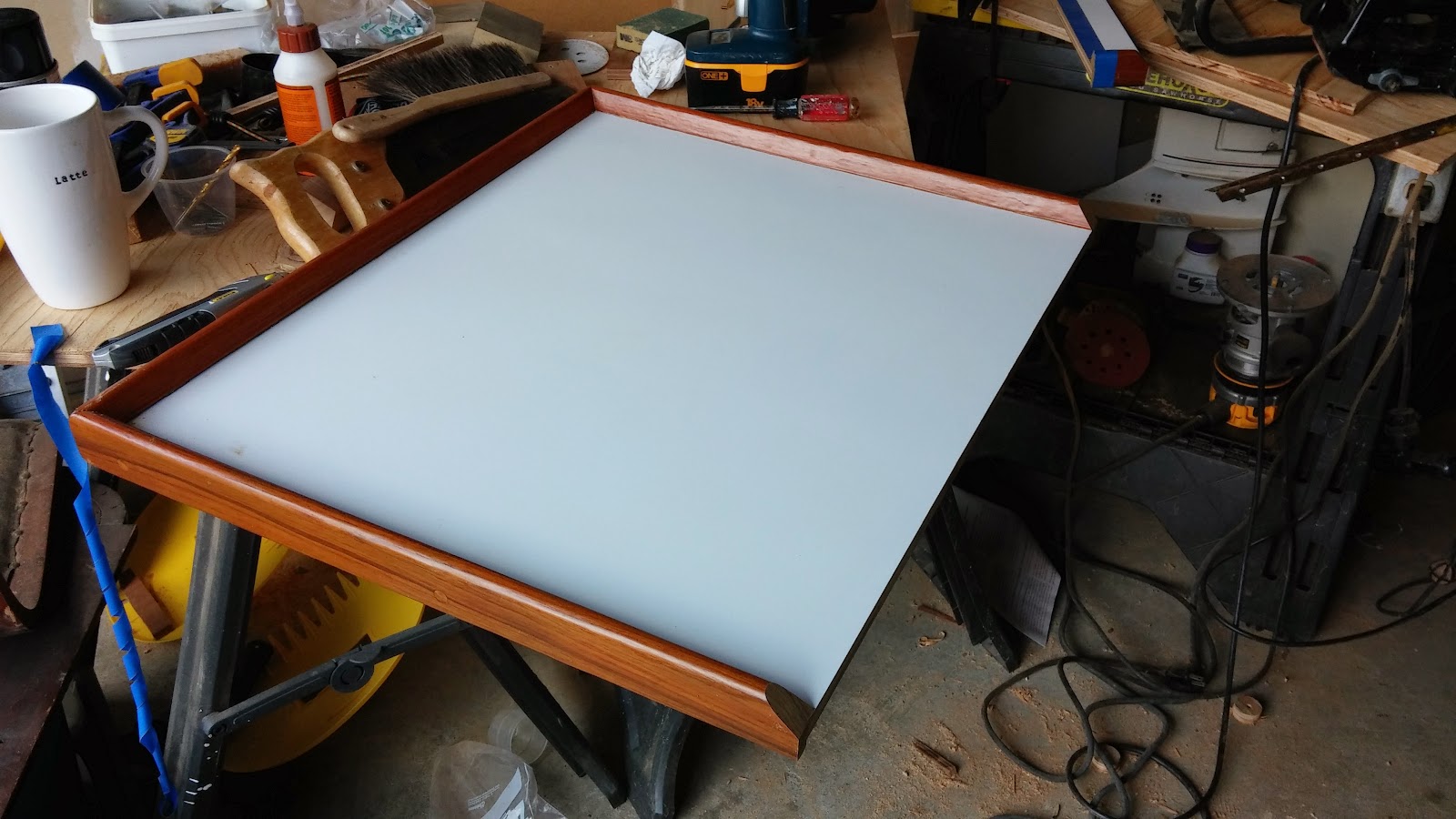 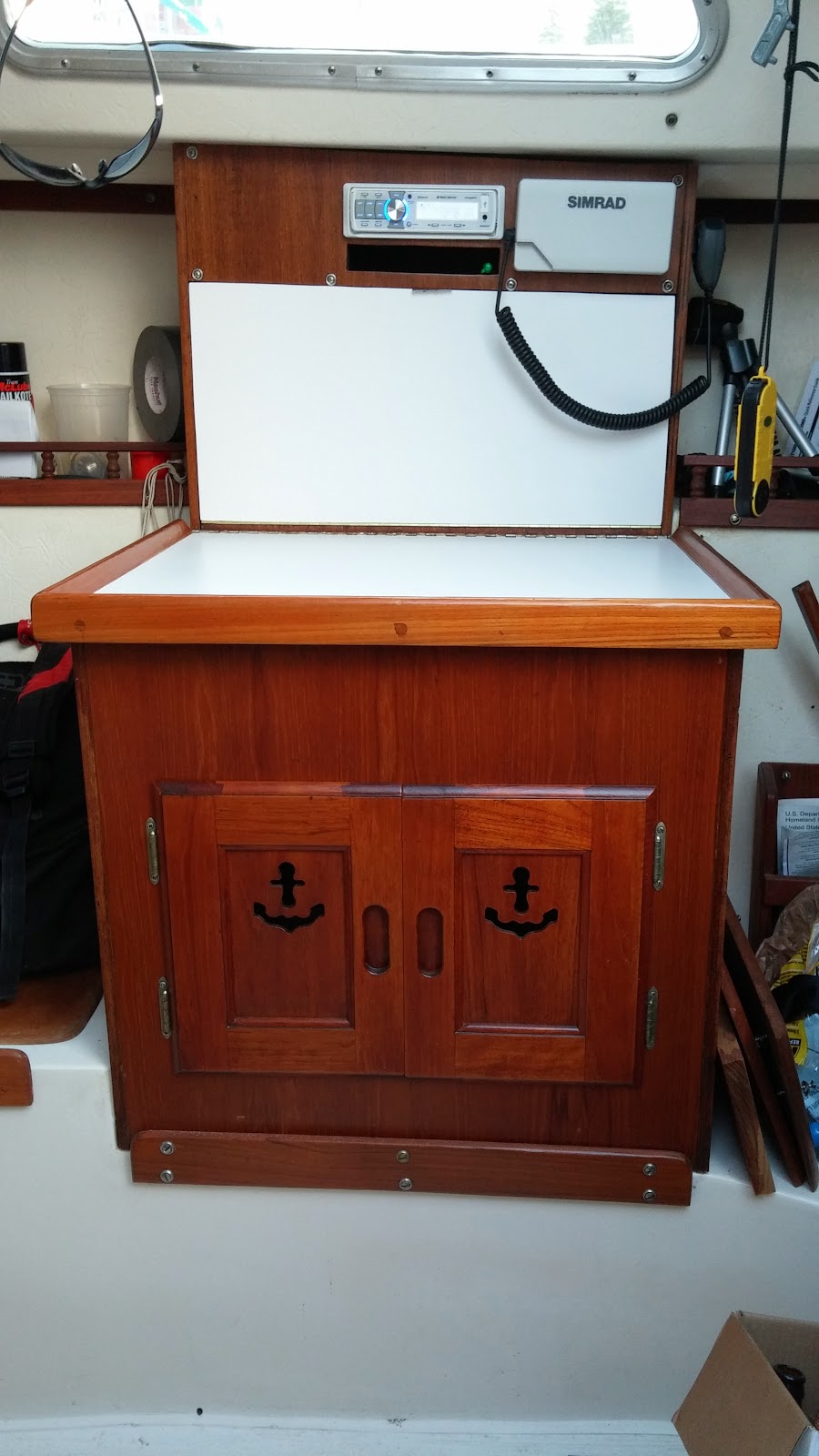 And so this Project draws to a close.... FINALLY!   I have to find a way to make these posts a bit shorter, but this project was a big one.... I will cover the installation of the Radios and the associated wiring in a later post... this one has been long enough!  But I am really happy with the results!