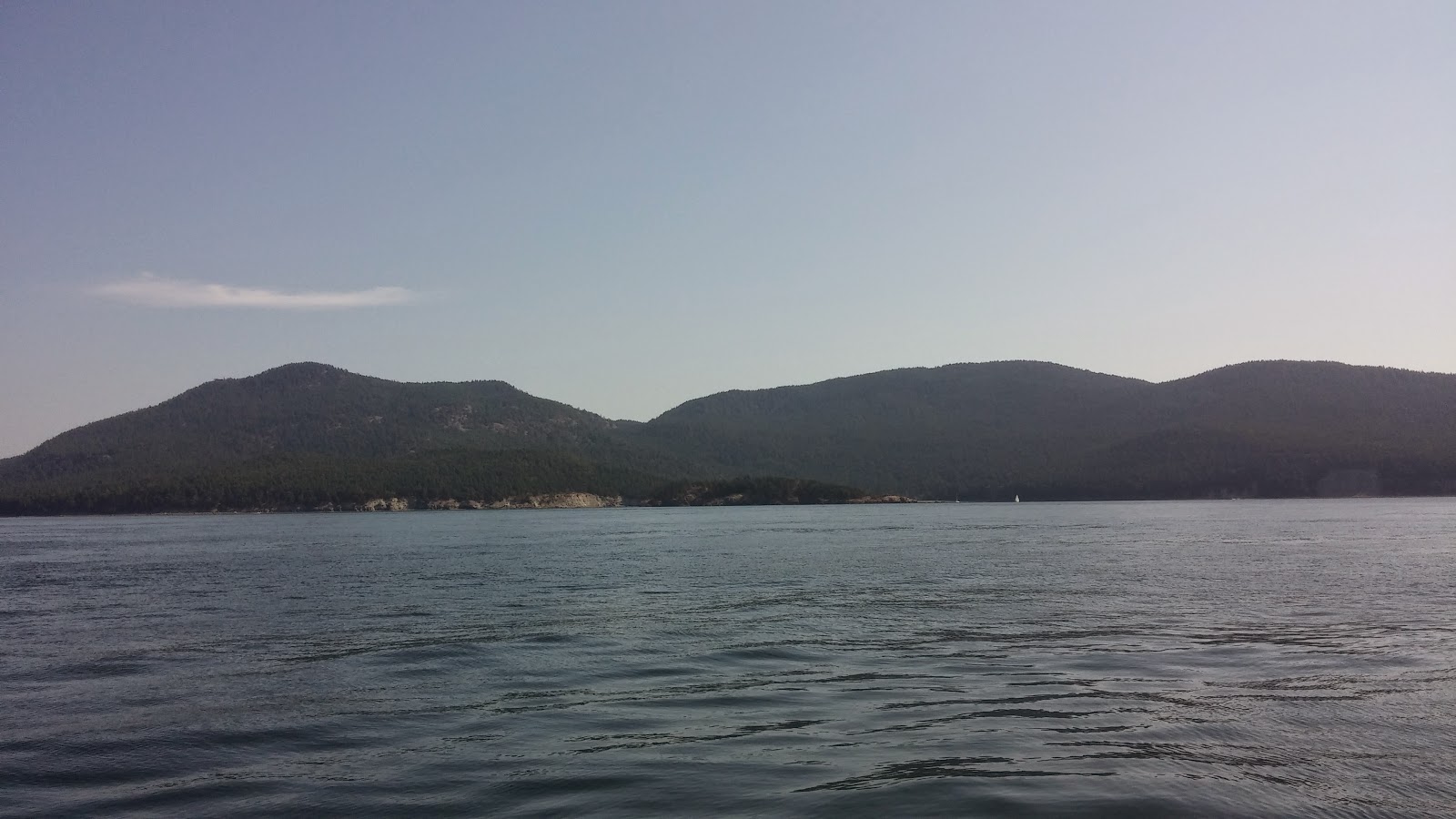 I left as early as I could from James Island, but I had to wait for the Fog to clear enough that it would be safe. I was finally able to leave about 10:30 or so.

I did have a mission to accomplish along the way... remember when I paid for that Ice in La Conner, but forgot to get it from the machine?  Well I was getting low on Ice and I knew what I had wouldn't last a week, no matter how nice this cooler is (the Ice I started with lasted for 6 days, and I still had about a quarter to half of that left... not too bad!).  So I had to make a stop along the way to Blakely Island general Store and Marina to get some more.  It wasn't too far out of the way to Clark Island which was the next stop on the tour...It was a really nice store, and the dock made it easy to get to...  I was a little shocked when someone on the power boat ahead of me on the dock said they were impressed that I could Dock Dulcinea so smoothly all by myself.  I guess I am getting the hang of this.  It really is all about being ready before you get to the dock.... bowline run aft, fenders out, lifelines opened, stern line ready to be grabbed.

Just a short jaunt from Blakely Island was my next destination... Clark Island.  Another in the chain of Islands that is the San Juans, Clark Island was a great place to hang out for a night.  The Moorings are of a newer design than what I have previously encountered (Basically a metal "teepee" sitting on top of an old tire.)   The newer design is basically a barrel-shaped float that has an indentation on the top that houses the metal ring that you put your line through.  It is a little more challenging to grab the ring, but not bad.  take a look in this short video:


I didn't do a whole lot here, but I did go ashore to register for the mooring buoy, and of course, snap a few pics...

The next morning my departure was delayed, yet again, by fog.... I didn't get going until 11 or so, when I felt it had burned off enough to be safe.  Next stop SUCIA ISLAND, which has been called 'the Crown Jewel of the San Juans'...  I was hoping that it would live up to it's reputation.

It was only a short Jaunt of seven and a half miles and one and a half hours of motoring (of course, because that is what we do here in Puget Sound in the summer...) to get to this Island, The one I had looked forward to the most, and I was not disappointed!

I decided to approach the Island from the south and see if I could catch a Mooring ball in Echo Bay, which is by far the largest anchorage at Sucia.  There were a LOT of boats here, but there were still mooring balls available, as well as horizontal moorings, which I had never seen before. I caught a ball the first try this time....


Sucia is a horseshoe shaped island with six different anchorages and miles and miles of hiking trails.  There is also Camping available if you are so inclined.  I was there for 3 days and only scratched the surface of all the things there are to do and see.  The hiking was great and it had trails from easy to difficult.  There is a lot of sandstone around that has been carved by Mother Nature, so it is a photographers dream.  The kayaking is also superb.  you could Kayak for DAYS in this area.  I really can't say enough how much I enjoyed this Island.  By far my favorite place I have visited so far.  Next time I am here I might try mooring in Fossil or Shallow bay...  It is definitely a place I will return to.

so after three great days of hiking, kayaking and exploring, it was time to head back home.   my next Stop was going to be Stuart Island, then Roche harbor then Port Townsend, but the weather was going to deteriorate in a couple of days, and I didn't want to get caught in the Strait of Juan de Fuca in bad weather, so I changed my route to go to Friday Harbor, then to Hunter Bay then back through the Swinomish Channel and back through La Conner.  Heading into Friday Harbor, the wind was blowing, as usual, right off the nose, but was pretty strong.  I had plenty of time so I decided to Tack in so I could get in some pretty good sailing time. Take a look!

Friday Harbor was great!  great facilities, a nice hot shower,  and a great dinner.  a place I will return to.  I met some great people there.  we even had sundowners.  They also helped me get out the next morning, which was really nice as I had to fight both the current and the wind to get out of there without hitting anyone. (I saw 3 boats try to get out earlier and they ended up hitting or side swiping boats on the way out.

the trip back was relatively uneventful, but rather than spending a night in Tulalip Bay, I went to the Everett Marina.  Another great place.  Coming back a day earlier than planned allowed me to spend Labor day with my sister and brother in law at a house they were house sitting at in Wollochet Bay.  there was a mooring ball in front of the house, so I threw a line on it and had a great time with them and some friends.
﻿
The next day it Back to Commencement Bay and my slip at Foss Harbor Marina, two and a half weeks after I left.  All in all a GREAT trip and I learned a LOT.  Can't wait for my trip this year!!!!!