Winches.... a staple piece of hardware that sailors rely on to haul sails up, and to keep them trimmed.   They can also be used to haul people up and down the mast or out of the water, and are used for many utilitarian purposes such as putting Dingys in and out of the water, and even hauling the engine out of the boat.   It is NOT a piece of equipment that you want to fail at those critical times when they are under load.  Yet this is possible if they don't have proper backing plates.

When I went to remove all my winches so I could take them home and clean them this past winter, I found a surprise on my primary winches.

That's right... they had no backing plates. just some small washers.  Now why is this a big deal?  well, if you have ever been sailing close-hauled (the fastest point of sail) in 20 knot winds, you know that some incredible pressure can be applied to the winches when trimming the jib or genoa (the sails up front) to the tune of hundreds, if not, thousands of pounds per square inch.  If the winch is not properly backed up, this force, albeit in extreme cases, could possibly rip the winch right out of the rail.

To properly back a winch, you should use a PLATE that distributes the loads across a wider area.  Usually these plates are made of stainless steel or Aluminum, and are custom made for your winch or what ever hardware you are backing. 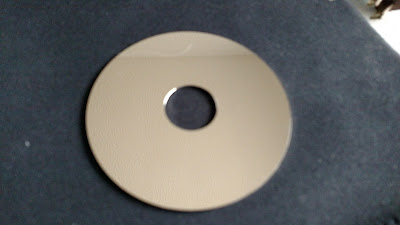 Now, you may recall in my earlier post, that I am a Geek who likes to take things apart.  When taking apart some hard drives I had laying around, I removed the platters and wondered if I could use them for anything.  Now, hard drive platters are made out Aluminum and look like CDs.  Then the light bulb in my head went on!  Aluminum plates!

The diameter of my Winches was a bit bigger than platters, but I found that If I cut them in half that I could make them fit.  So I taped a four of them together for the big winches (so I basically doubled up the backing plates on my Primary winches) and two for the small winches and cut them in half.  Then I marked the holes directly from the winch bases.  and while they were still taped together, drilled out the holes on my drill press, and Viola! custom made backing plates, and best of all, they were FREE!

I feel a lot better when using the winches knowing they now have backing plates.  I plan to make more backing plates as I go about rebedding most of the hardware that mounted on the cabin roof, and the stanchions as well!