So the second day started with an inventory of everything that came with the boat... and there was quite a bit of it!  (as usual, click on any picture to see a bigger version of it...)

the first thing I found were a pair of Foulie bibs, so I just had to try them on, and lo and behold, they fit!  Sweet!

Next was a couple of items that were stored in the Sea Berth (the berth on the starboard, basically under the cockpit. in one box was a small vacuum cleaner and some odds and ends of hoses and the like.  In the other container was a random orbit sander, which will really come in handy, as I forsee a coat of bottom paint and some work on the deck fixing some small areas that have delaminated, in my near future.

Next I looked around the Galley, some coffee cups, various cleaning products, dish soap, chrome cleaner and the like.  The top drawer was filled with 3 -4 place settings of silverware, some knives, and of course, the prerequisite Wine Bottle opener and regular bottle opener which says, in a Homer Simpson voice "Beer, beer, beeeeeeeer... yes, Yes, YES!" the first time I opened a bottle with it, it kind of startled me! 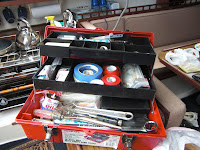 Nest was a tool box that had a bunch of... you guessed it... TOOLS! well, not only that but a whole slew of other stuff as well... tapes of different kinds, light bulbs, electrical connectors, epoxy in the dual tubes, and so on.... 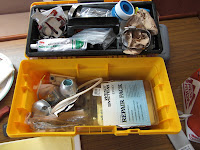 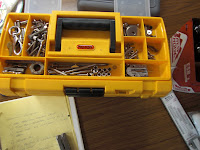 Then there was this Yellow tool box, that was full of.... WRONG... not tools, but all kinds of stainless screws, a spare set of Zincs (my boat takes 1 inch zincs, apparently) fibreglass repair kit, various adhesives, and so on and so on.  not a bad haul so far...
But Wait! there's More!

I found a rotary tool with a bunch of extra bits and sanding drums.... very handy to have for working in various spaces in the boat...

﻿
﻿﻿﻿﻿ I found another box with a bunch of Spares ... Spare Prop, spare fuel filter, spare air filter, a brass Ships bell (I will have to look around for the mounting hardware) and a bunch of spare wire of various guages and lengths...
﻿ ﻿
Finally, for now, I found a couple of those chairs from West Marine that can be used just about anywhere... cool!

Oh, and there is a complete set of cushons for the cockpit! Very cool.... you can sleep out there now... well if it isn't raining anyway!  good place to do situps and pushups and stuff ... LOL...
﻿﻿﻿
﻿﻿ The weather was really nice for part of the day anyway, so I decided to test out the Dinghy... Note to self... wear boat boots in the dinghy that has been outside in the rain for awhile... my shoes got pretty wet... Did the dinghy and engine work?  take a look at this video for the answer!


After that refreshing dinghy ride, it was time to get back to work.  Time for some boat work!  What was my first repair job?  well, it was the water pump on the 27 HP Yanmar Engine... the belt on it was so loose, it was amazing that it pumped out any water, although truthfully I don't know if this is the water pump for the fresh water cooling, or the water pump for the raw water that is pumped through the exhaust... either way, it HAD to be fixed!
so this is really basic engine maintenance and not really a repair... loosen a couple bolts, use a high tech tool to force the pully to swivel down... in this case a large screwdriver... retighten the bolts, and Voila! a nicely tensioned belt, just like it is supposed to be!  I am a genius!  LOL...


Of course, if we are to live in the real world, we know that things aren't perfect... especially on a 37 year old boat... I found this small leak when it rained cats and dogs for a little while... Well I needed to refinish the teak on the outside anyway, I will just have to make sure I rebed it well.... any suggestions on what to use to plug the holes where the old instrumentation was?

I will leave you with some pictures I took when I was out in the dinghy, and from my boat... it really was a pretty day, for part of it anyway! 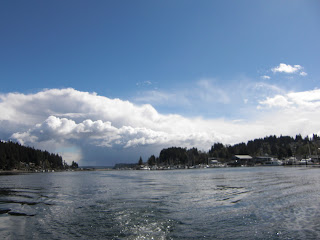 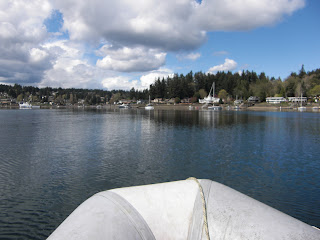 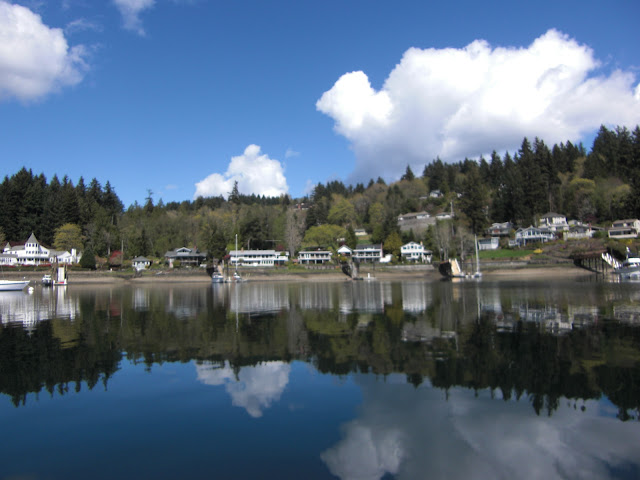 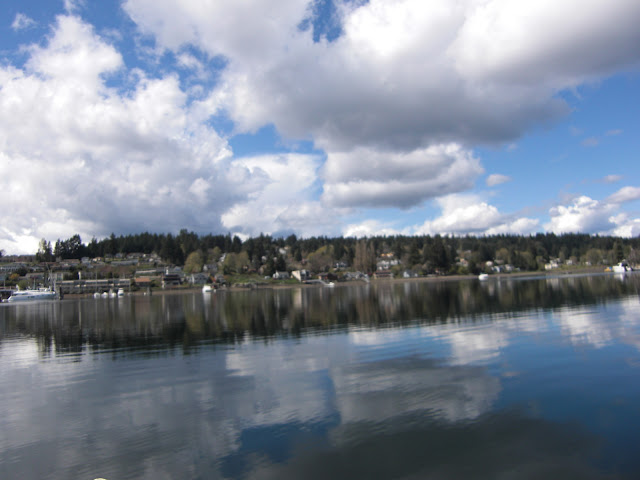 So as you can see, I had a pretty good day?  Stay tuned... there is much more coming, including moving from Gig Harbor to Foss harbor... the first sailing... well, under my command anyway!