The Trial of the Catalina 30

April 08, 2013
Well, the Sea Trial, that is! So after being postponed several times, we finally got all the parties together, and took her out for a run. I was a bit worried the weather would be too bad to really run her through her paces. as it turned out, the weather was perfect! Well not the temperature or the cloudy skies, but at least it wasn't raining, and we had a bit of wind as well.

I met the current owner, Dan, who is a really great guy, and was more than willing to answer all of my questions, and show me all of the features of the boat. I was wrong about the engine before... it isn't a 25 HP, it is a 27 HP, 3 cylinder, freshwater cooled, Yanmar engine. I found out that the previous owners (before Dan) had completely overhauled the entire boat around 1990. Dan made a few changes himself over the 9 years that he has owned it.

We started up the engine and got underway. The engine fired right up with no problem, and sounded really good, with no tell-tale smoke. It was really quite calm in the harbor, and we were wondering if there would be any wind up to engage. it turns out that was all for naught... as soon as we left the harbor the wind came up, and so, the engine was cut, and up went the sails.

The Main went up amazingly easily, and the jib rolled right out.  The Jib looked in better shape than I had initially thought.  It was just the luff that was tired.  THAT could be fixed by getting Sunbrella sewn to the edges, which will also provide protection from the sun when furled.

The sails filled and off we went!  And pretty fast too... I think around 6 knots or so... There were a couple of moments (for me, not for Dan or Sue who are both veteran sailors) when we heeled over what felt like 60 degrees, and I thought it was too far, but Dan said it was fine, and that the Catalina was designed in such a way that when it gets overpowered like that, it will automatically head up into the wind and slow down a bit, and sure enough, it did. 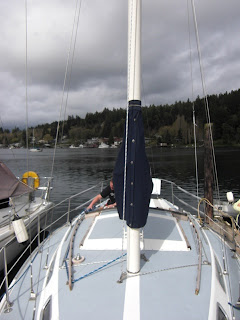 I took over the helm, and it took a few minutes for the muscle memory to come back when operating the tiller (left goes right, right goes left), but eventually the memory of those days racing my Hobie Cat came back.  the boat steered really well, and pointed pretty well too.  It was fun, but it only lasted 30 minutes or so, and then it was time to come back in.  During the sail we talked about as many things related to the boat that I could think of, some of it's peculiarities,  and operations.  It was kind of like information overload really, but I needed it.

Dan took the helm and pretty effortlessly put her right back in the Slip.  Once we were docked, he showed me how he flakes the sail, and buttons her up.  I have to say, I was really impressed with the level of care he put into maintaining it.


He took me on a tour, showing me the everything in the storage lockers, and all of the stuff that he was leaving with the boat... and it was a LOT.  I would have to estimate about a thousand dollars of things like stainless steel fittings, extra prop, tools, equipment and so on.  I had initially thought he hadn't cleared out all of his stuff, but in reality, all of this stuff was coming with the boat. 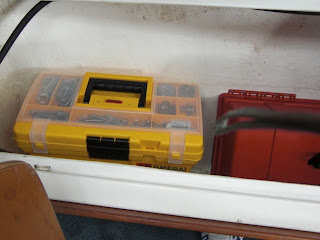 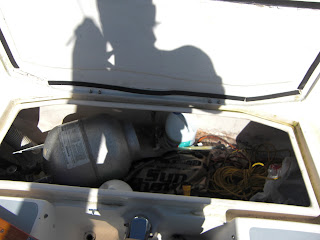 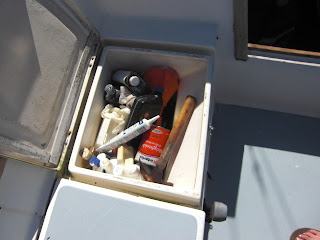 More stuff coming with the boat 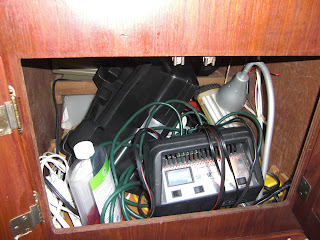 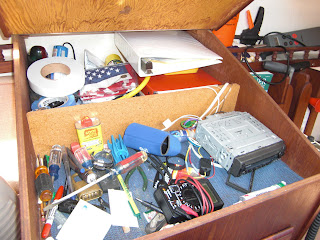 So now it comes down to the nitty gritty, gut wrenching decision time. Sure there are little things that are wrong with it, but the boat is over 30 years old, so what do you expect? So, now it is on to the next steps, and hopefully, by this time next week, I will be a boat owner!!!!!

Stay tuned for the next part of the adventure!!!!