The electrical situation aboard Dulcinea was pretty sad.  it was one of those things that gradually got added to over the course 37 years. Very much like a house that gets modified over the course of many years.  It started out bad, then just got worse.  The FIRST problem was the location of the electrical panels.... 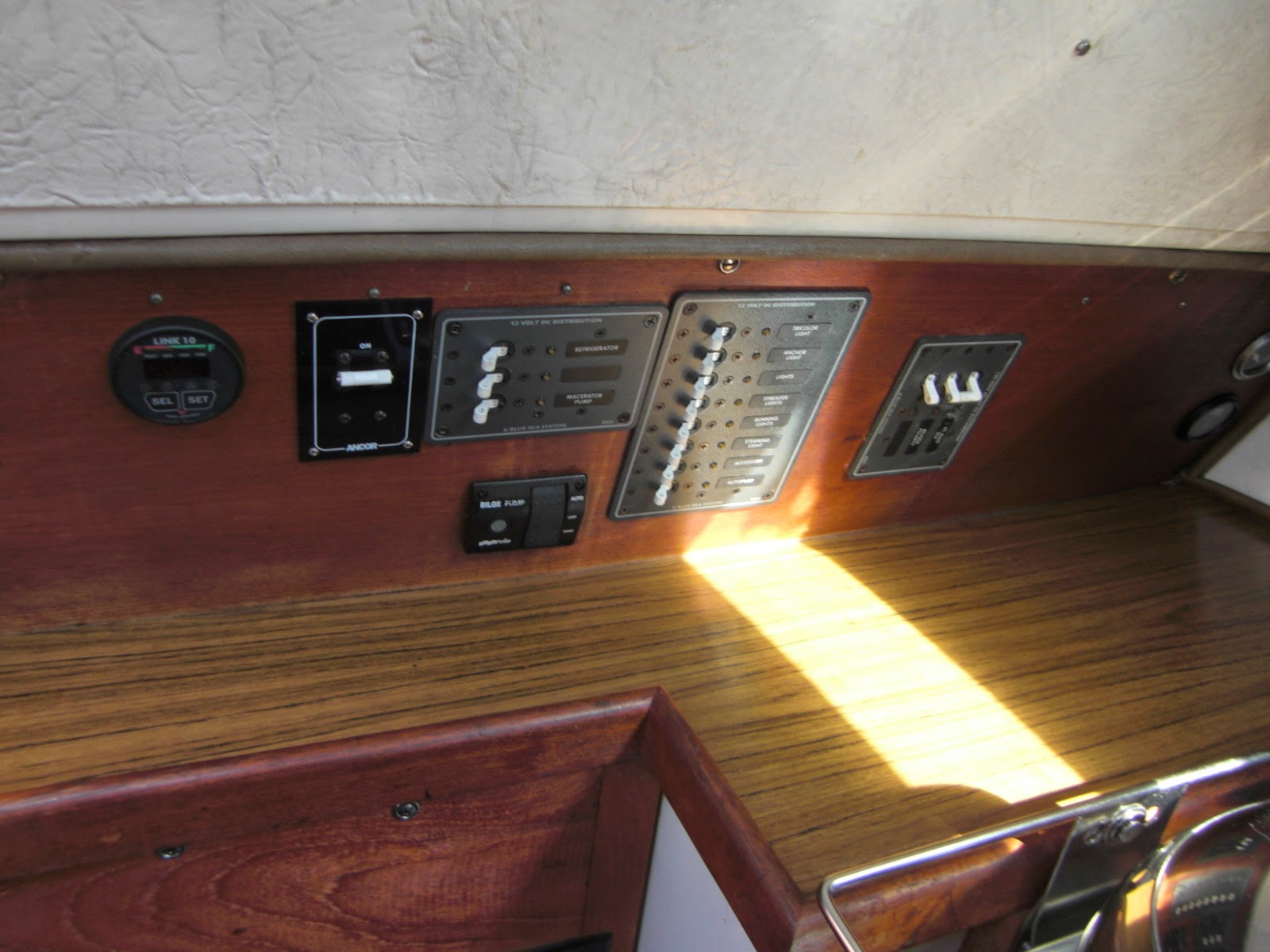 This is the aft bulkhead, right next to the galley.  there weren't enough switches, so you had about 4 or 5 items on one switch in some cases. The Fuel gauge and engine hour meter?  see those round dials WAAAAAY to the right in this picture?  That's them!  the only way to read them was to get on your toes, bend over the top of the stove and use a flashlight.... Oh! and the AC breakers?  well, make that singular - Breaker!  all of the outlets, including the refrigerator were on the same breaker.... not good.  But I digress, I was talking about the location.... Why is it bad?  well, that is because of what is on the other side of that bulkhead.  Let's go see!

First, go out into the cockpit, and open the Port side Lazerette.  Do you see where the long handled brushes are going? 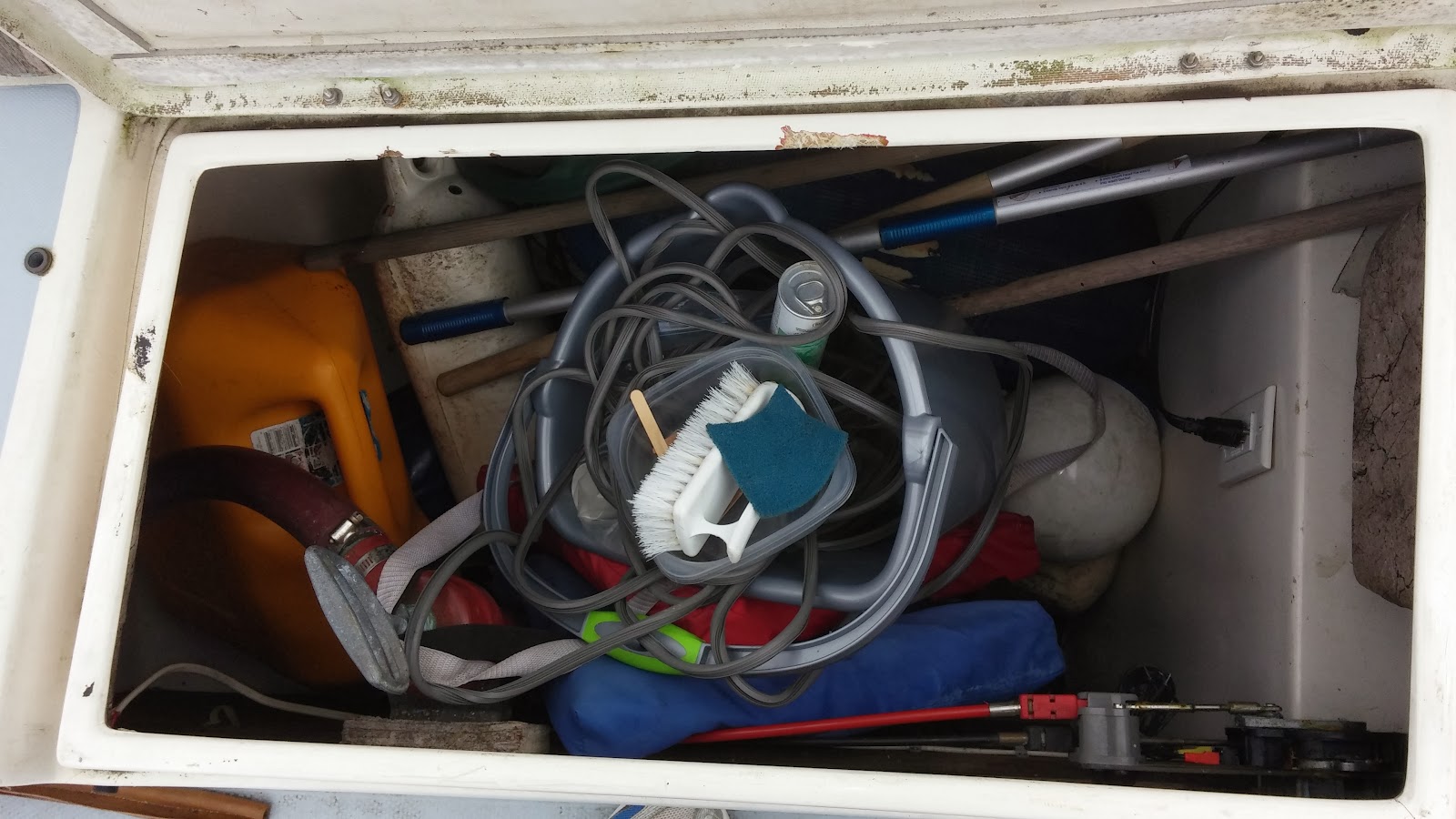 
Yup! you got it! That is the UNPROTECTED back side of the bulkhead, and the electrical panels.  Let's clear out all the stuff and take a better look! 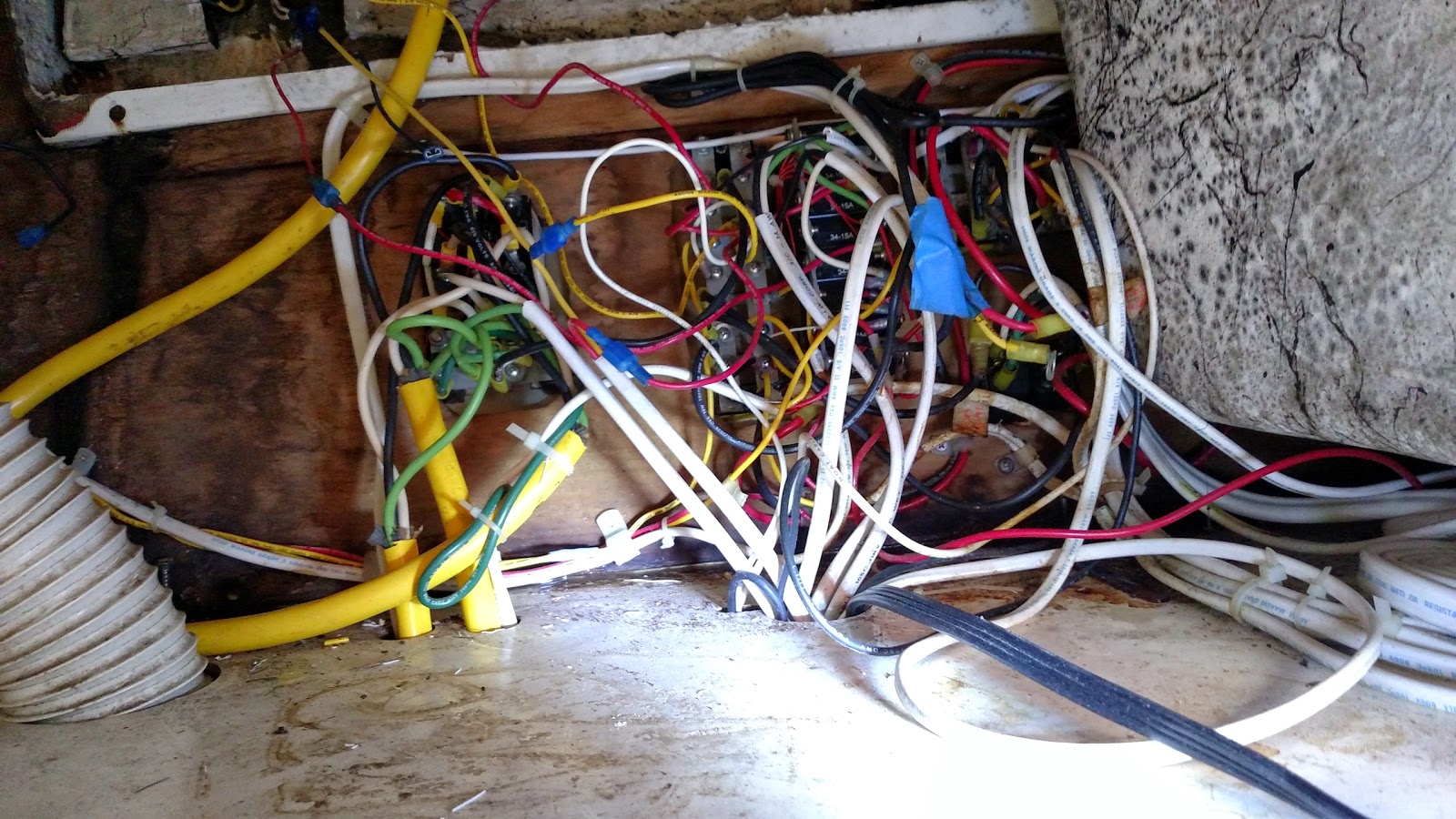 Yeah, this is the rats nest of electrical wire that runs all of Dulcinea's electrical stuff, both DC and AC.

This is an accident, or worse, a boat fire, just waiting to happen.  It reminds me of a house that I was renovating once... a lot of electrical connections and splices, Not done to code, then hidden within the wall.  It is not a question of if it will fail, just matter of WHEN it will fail.

So, this was going to be my winter project, and it indeed, took me most of the winter to complete it.  When I Redesigned the Navigation Station, I had planned to move all of the electrical stuff to it.  So that is where everything was going to go... in my mind anyway.  Getting there looked like it was going to be a real adventure.  But that is why I have a boat, right?  for the Adventure!

I was feeling a little bit overwhelmed, but as the old saying goes, "The Journey of a Thousand miles begins with a single step."   So, the first step... DISCONNECT the batteries.

Step 2, take out, then trace each wire back to its source, and label it, one wire at a time. 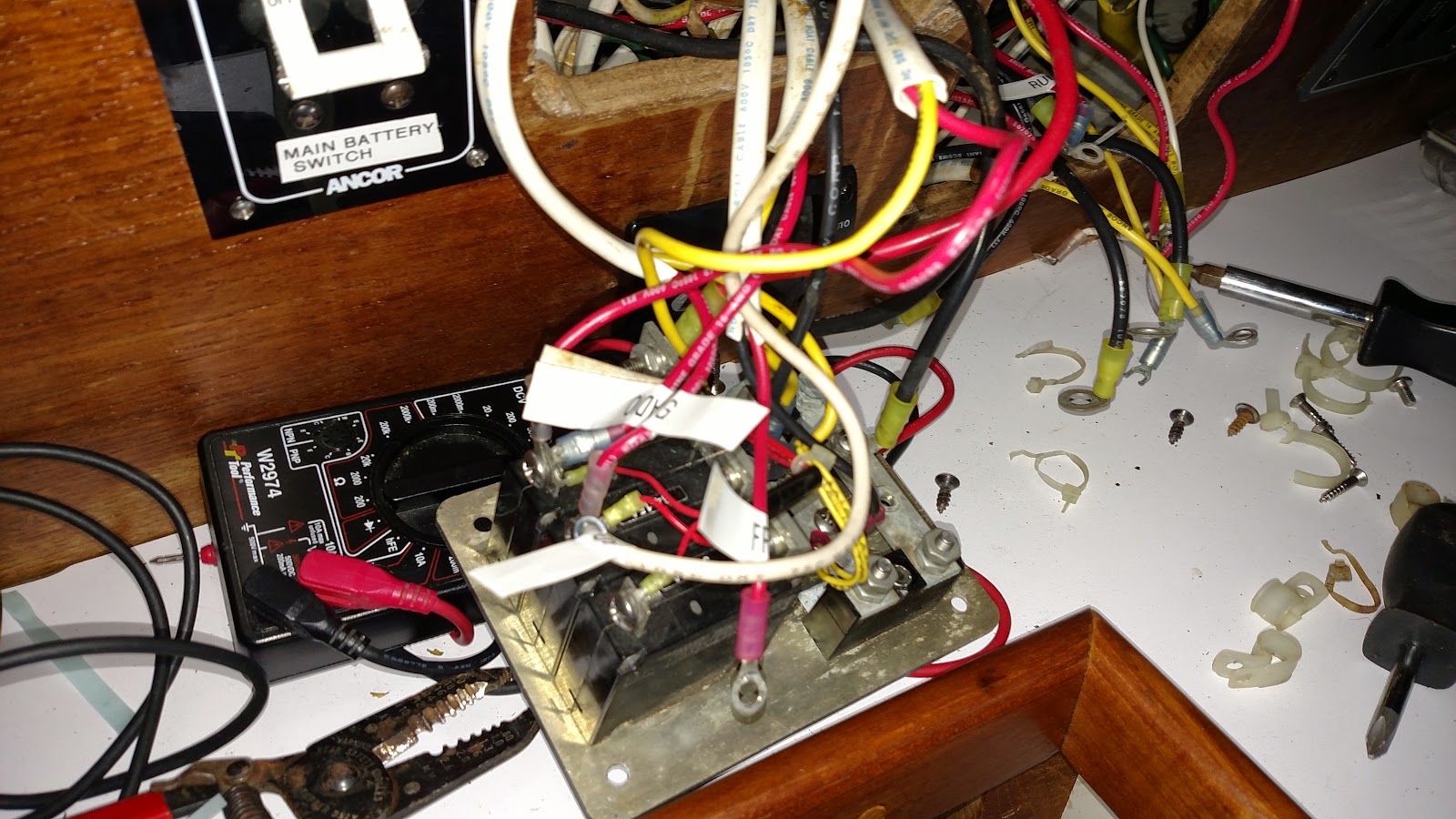 I used my label machine to make identifying flags for the Positive wires of all of the appliances and devices, as NOTHING was labeled.  It wasn't anywhere near as daunting as I feared... Red wire Positive and black (or yellow) wire negative. It appealed to the logical thinker that I tend to be. it just took a long time, as trying to trace wires in a boat is NOT easy.  There is lots of Boat Yoga involved!


The first step in putting it all back together was to figure out how I was going to lay everything out in the Navigation station.  This may seem a bit of over kill, but I measured everything, then laid it out on graph paper, 1 inch = 1 square.  Then I cut out all of the items I was going to install (or already had installed), then laid them out.  After a lot of experimenting, This is what I ended up with.  I felt it was a pretty logical layout, with all the DC items on the left and all the AC on the right. I also figured out a place for the 12v accessory/USB ports, and a switch for the panel lights. 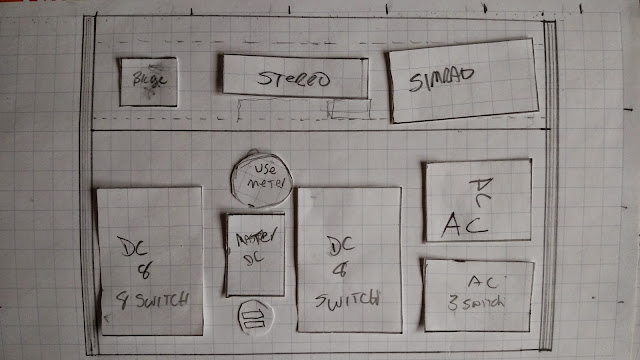 Next, I cut out full scale templates of all of the items, and laid them out on the Nav station door.  Yup! they all fit!  Then it was carefully tracing everything so I could cut mounting holes for them. 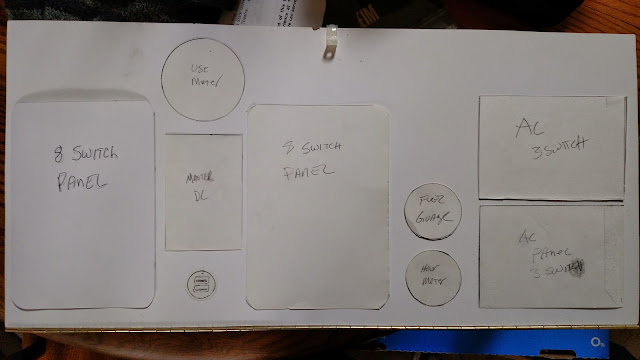 To cut out the openings for the DC and AC panels, I decided to use a tool I don't use a great deal, but when you need it, it saves a lot of time.  That is my Mortising attachment for my Shopsmith.  It basically cuts square holes.  There is a drill in the middle of a box, that has very sharp edges and corners, which turn the round hole square.  This would be perfect!


Once I cut the square holes, it was time to connect them with straight cuts.  I was concerned that if I use my jig saw, that I would chip the formica, so I turned to my new favorite tool, my Dremel Multi-tool.  It made short work of the cuts, with no chips in the formica!


That was most of the cut out work.  The rest involved using the appropriate size hole saw to cut openings for the Use meter, Fuel Guage, Hour Meter, and 12V accessory outlet.

Next thing on the list was to mark and drill the holes for the screws that would secure the panels.  So I set up the Shopsmith in Drill Press mode, and it was a snap to drill all the holes. 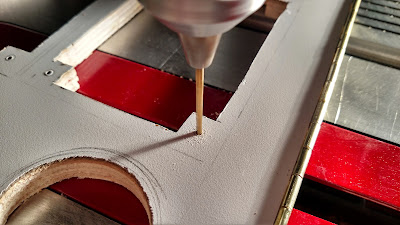 All that was left now, was to attach the panels and guages to the board. A few minutes work with a screwdriver, and VOILA!  Looks good, eh?


So it was Back to Dulcinea to install this back into the Navigation station, and to start the task of rewiring.  Demolition is always easier than construction, and this was no exception.  I had yanked and marked all of the existing wiring, and now was the time  to put it all back together.  When I got back to the boat, as the cabin looked like a bomb went off in it....

So that was the first month or so of the refit.  In Part 2, I plan to discuss the elements of putting it all back together, the RIGHT way!  If you have never done any electrical work before, I hope that it will give you a bit more confidence to tackle your own electrical challenges!  Stay Tuned!!!!!!

There are many things I love about my Catalina 30, S/V Dulcinea.  She sails well, points well, is very roomy and has lots of headroom for example.  One thing I wished there was more of was STORAGE!  I mean, you can't have too much storage, right?  After being on many sailboats, one thing that I noticed on most of them was that THEY had storage behind the settee backs.  Mine did not.  Perhaps hey didn't think of that back in 1976.  here is a picture I took when I had the Galley and seat cushions removed.  the areas highlighted in red are prime for new found storage! Now it is always Nerve wracking to cut a big hole in your boat, no matter where it is, but I needed to cut an exploratory hole just to make sure that my suspicions were right, so I took a deep breath, and cut this one... Yup!  looks like I was right that there was no reason I couldn't create these storage spaces!  so, I manned my Dremel Multi-Max and cut the holes to full size.  How did
Read more